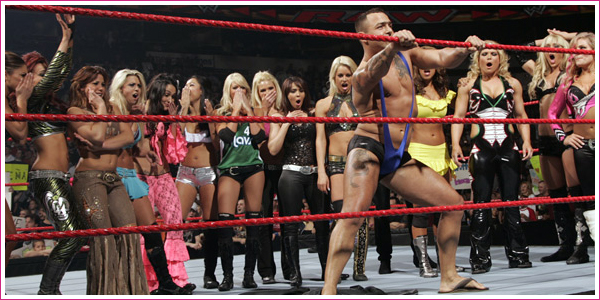 *Headdesk* ‘Twas the final Raw before WrestleMania when WWE made sure they hammered home that ‘Divas suck’. One last reminder of our dashed hopes and dreams as we head into yet another underwhelming ‘Mania for the Divas. Last year, it was a glorified tag team match we could see any other week on Raw. The year before, there was Ashley, ’nuff said. And this year? With the Playboy affiliation broken, we had hoped for something grandiose and befitting of WrestleMania – Melina vs Beth Phoenix perhaps? Looking back to the beginning of the year, there was such promise for this year’s event. Last night however, instead of the final onslaught to an interesting, engaging match at WrestleMania – we got Santino in a “mankini.”

So the final Raw before WrestleMania and we are treated to an 18 Diva tag team match. And instead of putting over the Divas who actually have a shot at winning, we’re putting over ECW’s barely-existent Diva, Tiffany. *Blink* Honestly, this match was a horrible trainwreck and lasted even less time than the 16 Diva match last week. I have nothing to say, this was just beyond pathetic.

I’ll tell you who I do feel sorry for though and that’s Gail Kim. What a horrible match to earmark as her official ‘in-ring return’. Technically though, much like 13 other Divas, she didn’t even wrestle in the match. She just made her return last Friday and hot-shotting her into this one as ‘just another face’ makes her whole return look weak.

And then there’s Santino. The build to the only WrestleMania Divas match revolves around a man? Go figure.

With the lack of promotion for this match, you wouldn’t be amiss to forget that there are going to be some ex-Diva legends gracing us with their presence this Sunday. Possibly, the Miss WrestleMania match’s only saving grace. To say that they’ve wasted the audience’s time and their own potential profit, is an understatement. Announcing the likes of Trish Stratus beforehand would have scored some extra pay per view buys. The handling of the former talent has been greatly mishandled, as they could have built up Trish, Torrie, Sunny and co. as feature attractions to this match and the event as a whole.

Nevertheless, the build to WrestleMania is now complete and much like previous years, leaves a lot to be desired.