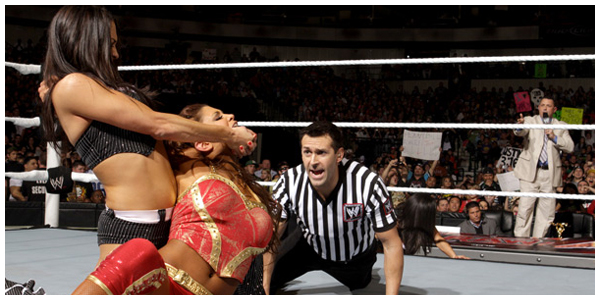 After winning a No.1 Contenders’ Battle Royal on last week’s edition of Raw, I’m sure Brie Bella was primed and ready to take on Divas Champion, Eve, in a title match this week. Unfortunately for her, she was replaced by her twin sister, Nikki in the match. There’s a joke in there somewhere about ‘Twin Magic’. In any case, this week Eve went one on one with Nikki Bella with Brie Bella in her corner. To even up the odds, Eve brought along Gail Kim for back-up. Will the Bellas’ ‘Twin Magic’ score them another victory over the champ? Check out the match below:

We come from commercial to find Eve in the ring getting a pep talk from Gail Kim. I know I’m always getting on Eve for not showing much personality, but she is oozing disgust and disdain for The Bella Twins tonight. I must say I’m impressed. Out next are The Bellas and despite being in singles action, both are dressed for in-ring action. Come on, ref. You have to see what’s coming from a mile away…

Nikki climbs into the ring, the official signals for the bell and our title match is underway. As soon as the bell rings, Eve charges at Nikki for a lock-up. After a bit of back and forth, Eve muscles Nikki into the ropes and take her down with a throw. Nikki tries to get some distance between her and the champ, but Eve grabs her by the hair and smashed her face into the turnbuckle repeatedly. Still dazed, Nikki stumbles right into Eve, who tosses her across the ring by the hair a few times.

Nikki makes it back to her feet again, only to receive a flurry of strikes from the champ for a near fall. Eve goes after Nikki once again, but the referee pulls her away, giving Nikki the opportunity to pull Eve into the ropes throat first. With the match now in her favor, Nikki chokes Eve with the ropes, prompting the referee to intervene. While the official is busy reprimanding Nikki, Brie slaps Eve across the face and Nikki rushes over and lays in a few hard stomps to the back of Eve.

Nikki pulls Eve to her feet and gives her a taste of her own medicine, tossing across the ring by the hair for a two count. Frustrated, Nikki steps on the champ’s hair and pull her up by the arms, before picking her up and slamming her to the mat for another near fall. Nikki goes right back on the attack, but the entire match comes to a standstill, when Michael Cole gets up on the announce table and starts calling for this match to be ended, so he can make his announcement. Are you serious? Really?

Nikki Bella slaps on a modified abdominal stretch to wear the champ down, Eve fights out of it and both Divas start laying into each other with stiff forearms. Eve gets the upperhand and whips Nikki into the ropes, but Nikki stops short and lays Nikki out with a facebuster. Of course, most of this goes unnoticed, because everyone too busy focusing their attention to Cole, who’s making a giant ass of himself.

In the meantime, Nikki backs Eve into the corner, but Eve fights out with a slaop and a jumping kick off the ropes. Eve tries to capitalize, but Nikki is in the ropes and the official makes her back away. With the referee distracted, The Bellas try for Twin Magic, but Eve and Gail and the referee catch them in the act. Womp womp.

Eve throws Nikki back into the ring, determined to finish her off. Nikki goes for a clothesline, but Eve evades and hits her corkscrew neckbreaker for the win.

Fairly decent match from Nikki and Eve in my opinion, in terms of ring work. However, I feel the entire thing was shot to hell by Michael Cole’s interference. As a Diva fan, I couldn’t even concentrate on what was happening after Cole stated speaking, so I know the non-Diva fans probably forgot there was even a match going on. Frankly, I’m disappointed with WWE, more so than usual. Something like this should never happen during a match, much less a title match. In any case, It will be interesting to see if this angle with Eve and the Bellas Twins will go any where after this week.

In other news we found out that former SmackDown consultant, Vickie Guerrero will have to compete in a match to earn a spot on the Raw roster. Her opponent, none other than Diva Dirt Legacy Award winner and Tough Enough trainer, Trish Stratus. Check out the segment below:

I have to admit, I’m excited for this match. While Vickie is far from a wrestler, I’m always entertained when she steps into the ring. As we said on the Post-Raw Show last night, expect some shenanigans from Lay-Cool, a save by Kelly Kelly and possibly some build to a WrestleMania match.

All in all, not a bad night for the Divas in terms of ring work, but the Cole interruption put a sour taste in my mouth for the whole segment. Perhaps next week, the Divas can wrestle without getting the NXT 3 treatment.

Title reference here for those who don’t get it.