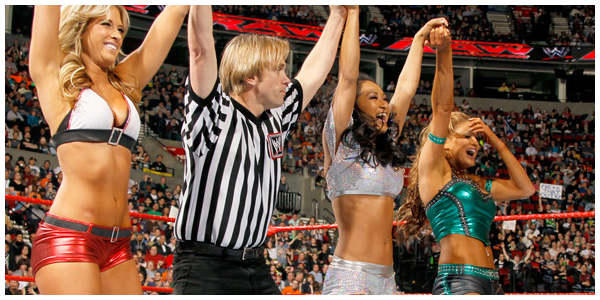 After last week’s moving tribute to womankind, I was bracing myself for the worst with this week’s show. Surprisingly, the WWE decided to put on a straight wrestling match rather than mold the Divas action to guest GM Criss Angel’s gimmick, and for that I’m grateful. But was the match anything to write home about? Let’s see:

Eve Torres, Gail Kim and Kelly Kelly make their way to the ring for a 6-Diva Tag Team match. I guess it’s been a while since we’ve seen one of those, though I haven’t really missed them.. Already in the ring are Maryse, Alicia Fox, and Katie Lea. Scrimping for time, I guess, but that’s nothing new..

Alicia and Gail start things off, Alicia latching Gail into a belly-to-back hold. Gail gets free and locks Alicia into a side headlock. Alicia tries to lift Gail up and gain the advantage, but Gail whips her to the mat, still holding onto the headlock. Alicia frees herself with a few jabs and whips Gail into the corner, charging. Gail slips through the ropes and the two trade blows before Gail leaps out of the way of a shoulder attack, landing in a straddling position on the back on Alicia’s neck. She tosses Alicia back into the ring, but Alicia regains control and whips again her into the same corner. Again, Gail blocks an attack and climbs the turnbuckle. However, instead of attacking Alicia she hits a charging Katie Lea with a flying clothesline, knocking her off the ring apron.

Gail turns her attention back to Alicia and gets a face full of boot. Alicia goes for the pin, getting a 2-count. She takes Gail to her corner and Maryse, for a moment, motions for Alicia to pound Gail’s head into her boot, but she decides against it, for whatever reason, opting instead to be tagged in. Maryse his a back breaker on Gail and goes for a pin, but Gail kicks out. She slaps Gail on the head, looking more like she’s messing up her hair rather than actually striking her. She then knocks Kelly off of the apron. Maryse gets in Gail’s face and gets slapped, getting a taste of her own medicine. Gail springs to life and tags in Eve.

Eve goes on a string of offense, getting a 2-count on Maryse. A poke in the eyes gives Maryse temporary control, until Eve nails Maryse with a kick off the ropes. She hits her somersault splash and goes for the pin, but Alicia and Katie Lea break it up. Actually, they were slowpokes and Maryse had to kick out before the referee counted 3. Get the lead out, ladies! The two of them grab Eve and slam her onto the turnbuckle. The referee, meanwhile, does nothing to stop this. A blatant 3-on-1 and all you’re gonna do is act surprised? Okay..

This prompts Gail and Kelly to enter the ring, and the match unravels. They hit tandem dropkicks on the heels and leave Eve and Maryse in the ring. Eve climbs the turnbuckle, but Maryse stops her with a slap. Maryse tries to toss Eve off the turnbuckle but Eve latches onto her arm, flipping forward and landing on the mat in an armbar. Maryse immediately taps out, and Eve wins the match for her team.

The announcers made a point to emphasize that Eve has been on a roll as of late. I guess a pillow fight victory and a pin in a 6-Diva Tag Team match constitutes an “incredible roll” in their book, but I’m not getting behind Eve just yet. Though, it is a big deal for someone to best Maryse. After all, she was virtually untouchable during the course of that never-ending Divas Championship tournament. Still, the fans didn’t seem to give a crap about Eve nor the action, based on their lack of reaction during the course of the match. The crowd seemed more dead tonight than any has in a while, but I could be wrong. I can’t say I felt much excitement either, other than the fun exchanges between Gail and Alicia at the beginning of the match. Alicia seems a bit jerky in the ring, but she still did well combating Gail’s high-flying moves.

I wonder why they even made it a 6-Diva match, since Kelly and Katie Lea barely even saw any action aside from getting pummeled by one of their opponents while on the ring apron. A regular tag team match would have sufficed, and it would have given Eve even more spotlight, which was obviously the goal of this match. Gail, despite having been a victory away from the Divas Championship, wasn’t relevant enough to lead the younger Divas to the ring. Obviously the entrance guys base the team’s music on who had the most momentum going into the match.

But seriously, I’m all for Eve getting a push. I just hope she and Maryse can put on a decent match. Between her repetitive move-set (Yeah, I said it. Shoot me.) and Maryse’s non-existent move-set, it almost seems like a recipe for disaster. Gail, with all her excitement and unpredictability, still couldn’t get an exciting match out of Maryse, so I fear what that could mean for Eve. Maryse and Eve didn’t do badly against one another in this match, but their exchange was extremely short and didn’t really give us a taste for what a real one-on-one match would be like. It was just Eve hitting her signature moves and that submission she had only broken out once before. Speaking of that move, it was a lot more fluid than the last time. I’ll give her kudos for that.

Let’s just hope this feud doesn’t get dragged out to the point where all momentum is sucked out. Gail and Maryse’s feud noticeably suffered from that, but I have a feeling the Eve is probably the Raw writers’ golden girl. She’s the hot new thing and they probably have more interest in making her look good than they did for Gail. At least that’s one thing this budding feud has going for it. Maybe, with that, the writers can keep their motivation going long enough to hold together a coherent (Dare I say suspenseful?) feud. I’m willing to hope for that, at least.