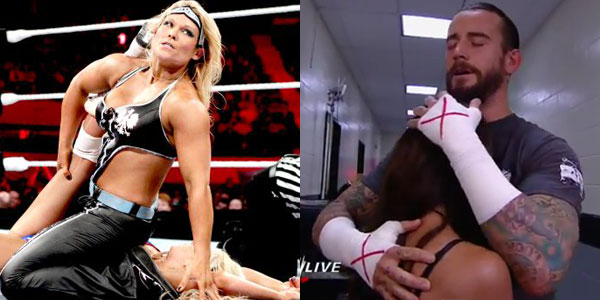 Hello out there, and if you’re reading this, I am not your loyal Khaleesi. She has taken the night off to celebrate her Khal Christian’s wonderful Intercontinental Title win at Over the Limit, therefore I am here to take over this week. Raw had it’s good and not so good moments. Beth Phoenix and Kelly Kelly squared off once again, this time with a shocked Layla watching from a backstage monitor. Aside from that, Eve (and her glasses) made their presence felt, as did Psycho AJ in a tremendous segment alongside CM Punk. Now let’s get to recapping so I can go indulge myself in the joyful WrestleMania DVD I just purchased.

Out to the arena we go, as the queen of HOLLA-ing, Kelly Kelly, steps out looking very American tonight. They plug that Kelly is once again featured in the Maxim Hot 100, but make no mention that the Divas Champion is as well. Poor Layla. Meanwhile, Beth Phoenix makes her way out next, and she does not look happy tonight to be squaring off with Kelly after losing the Divas Championship match the night before. Nevertheless, the bell sounds and Beth spears Kelly to the ground. She works over the buxom blonde with a few kicks and a body slam, before dropping an elbow and a leg drop for a near fall. Suddenly, we are taken to a shocked Layla, clearly upset at the lack of mentioning her inclusion in the Maxim Hot 100.

Back to the match where Kelly scores few forearms and a kick, as she runs off the ropes with a nice hurricanrana for a two count. Beth then levels K2 with a clothesline and grazes her head against the canvas. Phoenix hoists Kelly up by the hair, but ends up missing a splash in the corner! Kelly scores with a Thesz Press and then runs off the ropes with the whirlybird headscissors to send Beth’s head in the corner. Kelly then unloads with a series of kicks and smashes to Beth’s skull, before setting up for the handspring elbow! K2 goes for it… but NO, Beth chops her on the back of the head which looks to daze Kelly as the Glamazon then hits the Glam Slam for the victory. Beth poses celebrating her win, as shocked Layla stands waiting for Jerry Lawler and Michael Cole to mention her being on the Maxim Hot 100.

We head backstage to see CM Punk walking down a hallway… which can only mean one thing! My ears fill with the joyous faint voice of “Punk! Punk!” AJ runs up and says hi to the WWE Champion. She wants to tell him that she really enjoyed watching him beat up Daniel Bryan last night, which sparks him to call her sadistic! Psycho AJ begins to emerge, but Punk stops her and wonders if she knows she’s been acting like a fool this entire time. This reduces AJ to tears, as a weirded out Punk doesn’t exactly know what to do. He offers a hug and tries to console her that everything will be fine, wanting her to stop crying. Suddenly, AJ pops up with no tears and a smile, as Punk tells her that he digs crazy chicks! He then walks off leaving AJ a sobbing mess of brilliance.

Also, check out the following videos to see Eve Torres involved in a John Cena/Big Show segment below:

Thoughts: Kelly vs Beth was pretty much the standard match we’ve come to expect from them. It was used to promote Kelly’s Maxim Hot 100 slot, while keeping Beth looking dominant in her next challenge against Layla I’m assuming. Nothing new to be honest. Beth and Kelly matches sort of blend together for me outside of a few of the pay per view ones they had last year, and with only a few minutes on Raw, they don’t really have the time to make them stand out like when they faced off on PPV. I guess it was nice that Layla was at least acknowledged, although I don’t get why they didn’t mention her being on the Maxim Hot 100 as well? Pretty much just the standard to expect for Raw, although I’m glad the match wasn’t under a minute for once.

The AJ/Punk segment was great in my opinion. AJ is becoming that shining beacon of light in the Divas division, and by getting to be involved with storylines surrounding guys like Daniel Bryan and CM Punk, she is only going to keep getting better and getting the time that the women don’t typically see. I’m loving psycho AJ more than I have loved a female wrestling character in a long time, and I look forward to where this is going to take her. She deserves to get all of the spotlight in the world and I’m really glad that if a Diva was going to be picked for this role, it was her.