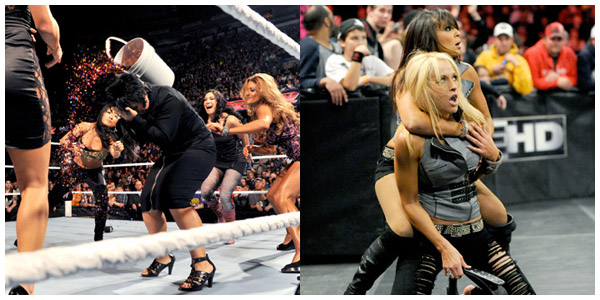 We start off with Natalya already in the ring, receiving cheers from the fans in her hometown of Calgary. Alicia makes her way out to the ring next, looking cocky as ever. The two Divas circle each other for a bit and the referee calls for the bell to kick things off. The Divas start off with a rough tie-up, with Alicia getting the upperhand and muscling Natalya into the ropes. Natalya reverses the hold, forcing Alicia to the ropes and the referee gets between the two to break things up. Nattie breaks clean, but Alicia seizes this opportunity and takes Natalya down with three hard slaps followed by a kick to the head.

Alicia picks Natalya up and lays in a forearm, before whipping her off the ropes and going for a back bodydrop. Unfortunately for Alicia, Nattie has her scouted; Natalya stops just in time, grabs Alicia and tosses her into the corner. After woman-handling her opponent for a moment, Nattie hits a picture perfect double underhook suplex, sending Alicia flying across the ring. Not wasting any time, Natalya goes for the Sharpshooter, but Alicia scrambles to the ropes to avoid. Not deterred in the least, Natalya pulls Alicia to the middle of the ring and locks in the Sharpshooter for the submission victory.

Natalya celebrates her victory in the ring with her fellow Canadians, but the party is cut short, as Lay-Cool make their way out to the ring to confront their opponent for Bragging Rights. Lay-Cool pretty much bashes everything Canadian for some cheap heat from the crowd, but they top it off by saying that The Harts belong in the looney bin, not the Hall Of Fame. Yeah, they went there.

Michelle goes to attack the First Lady of The Hart Dynasty, but slides back out, distracting Natalya long enough for Layla to go on the attack. Natalya snatches Layla up and sets up for her butterfly suplex, but Michelle comes to the rescue, laying Natalya out with a kick to the gut. Michelle then takes things a step further and slaps the Sharpshooter on Nattie. Not to be outdone, Nattie reverses the hold and applies Michelle’s heel hook submission.

Layla makes the save for her BFF and ends up on the wrong side of the Sharpshooter herself, but is saved by Michelle once again. The champs tumble out of the ring and make their way to the back to end the Divas segment for the night.

Good night for the Divas. Even though it was short, I enjoyed Alicia vs Natalya. It served its purpose of making Nattie look strong going into her match on Sunday and gave her a reason to be in the ring without the rest of The Hart Dynasty. My only complaint is that Alicia seems to be slipping into Jillian super-jobber territory, which is sad considering she was Queen of the Hill mere months ago.

I also liked the promo work from Lay-Cool as well. It was kinda lame to go for the insult-the-hometown heat, but it worked and the Hart family insult was the icing on the cake for me. For the first time, I really feel like Divas’ feud/rivalry is being decently built up and I’m genuinely interested in what happens at Bragging Rights and in the weeks following between Lay-Cool and Natalya.

In other news, Gail Kim threw some glitter… and missed. Observe:

I’m still not sure what the point of this segment was. It left me with so many questions: What did Vickie do to the rest of the Divas? Why are there buckets of glitter on standby? Who would win in a dance contest: Eve or Daniel Bryan? In any case, I’m sure that segment could have been every bit as good (probably better) without the Divas… and the dancing.

All in all, Raw was a mixed bag this week. We got to see some decent build in this Lay-Cool/Natalya feud, but on the flipside we had to watch Daniel Bryan dance. Either way, I can’t wait for Bragging Rights to see who’ll come out on top in this rivalry.