It’s Tuesday, which means it’s time for another edition of the Diva Dirt Monday Night Raw Redux! Yours truly is back and I’m recapping all the Diva goodness. And when I say goodness, I’m not being sarcastic in any way, shape or form this week – the show was genuinely decent for the Divas! Lana took to the mic and shot down The Big Show in a major way whilst we were also treated to two Divas matches; WWE Divas Champion AJ Lee faced off against Alicia Fox (with an incredibly verbal Paige) for the third time in recent memory whilst Brie Bella took on Summer Rae as her sister Nikki looked on from the backstage area. On top of all of that awesome, the Decade Diva herself, Lilian Garcia returned home to Monday Night Raw. Great to have you back Lil! Introductions done, let’s get down to business!

Kicking things off first, Lilian Garcia is back as WWE’s #1 announcer! I quite like Justin Roberts and it’s a real shame for him to go, yet at the same time, it’s nice and rather homely to see Lilian back on Raw. I wonder if Justin is annoyed… 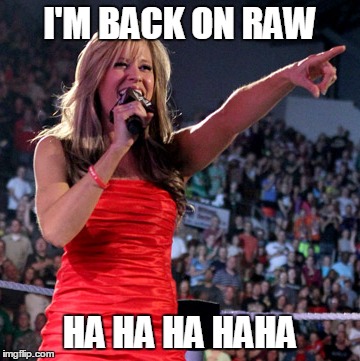 Moving on from Lilian poking fun, it’s time for some serious business as Cray-J Lee is going to be facing off against Cray-licia Fox, who is accompanied by Cray-ge. Ok, I’ll stop with the cray puns now.

AJ skips out first in her best jorts in my opinion! Lilian is announcing well and is on top of her game knowing that all eyes will be on her. Let’s hope she doesn’t muck it up and announce Alicia Fox as Alicia Keys again…

WHAT DO YOU MEAN THEY CUT ALICIA’S ENTRANCE?! Alas, I guess we’ll never know.

After a recap of Friday Night Smackdown, the match begins. Alicia applies a side headlock to kick things off, a move she follows up with a shoulder block. AJ retaliates with a running elbow to the face and a sweet crucifix sunset flip pin attempt that nets her a near fall. Alicia is already stressing out as her screams bellow throughout the arena yet AJ is undeterred and hits a wheelbarrow roll-up for a close call. AJ skips with a handful of Alicia’s hair in her tight little grasp and then she dishes out more punishment via a spin kick to the gut.

Alicia fights back in a lackluster way with a botched kick, yet Alicia’s normally perfect self regains her awesomeness when hitting an utterly stunning northern lights suplex. Yum! Alicia goes to the submission well next, hoping an attempt to make AJ tap will seal the deal. AJ tries fighting back yet Alicia knocks the peppy champion back to the ground and kicks her around the ring some more before nailing a gorgeous tilt-a-whirl backbreaker. That punisher of a move still wasn’t enough, so Alicia reapplies her chinlock.

“I HATE YOOOOOOOOOOUUU!” yells Foxy. Remind me never to be near Alicia and a dark alley at the same time.

Alicia hates AJ and she is about to hate her even more as even though Alicia keeps the momentum in he favour for a short while with a picture-perfect corner chokehold, AJ’s comeback starts very soon after! AJ hits a Lou Thesz Press from out of the corner as her first line of revenge attack before bruising Alicia with a corner clothesline. AJ follows that up with a neckbreaker before dishing out some more damage with a headscissor takeover.

Alicia then bolts to the outside only for Paige to get all up in her George Foreman! Paige randomly shoves Alicia and Alicia pushes her right back! Paige barges Foxy again and then throws her back in the ring. AJ seems a little taken aback yet sets her sights on Fox. Paige then yells a lot of abuse at perhaps AJ or Alicia, and the barrage of words distracts the champion big time as Alicia rolls her up for the win.

After the match, Paige and Alicia jump up and down like they’ve just won the lottery and they fall to the ground in hysterics as AJ fell for their plain – brilliant!

Our next Divas sighting comes from Lana, who is looking wonderful in white. After Rusev destroys Big E yet again (can we get some new jobbers please?!), Lana takes the mic. She reads Big Show, telling him he should be in a zoo with people throwing half-eaten food at him. The shade! Lana and Rusev summon for the Russian flag to drop yet Big Show has made sure that it doesn’t happen tonight.

Lana and Rusev kick off big style, huffing and puffing like they are about to blow some little piggy houses down. Then, things turn serious really, really quickly. Rusev threatens to rip the America flag down, only for a ‘US soldier’ to get in the ring and get kicked in the face by Rusev. Love the idea behind that. More on what I thought of this later though.

Our final segment of the night is Total Divas related as Brie Bella takes on Summer Rae. Both Divas are already in the ring as soon as the cameras roll and the bell sounds. Jobber Rae starts off well, working over Brie in the corner. Brie fires back with a crucifix pin for two and then kicks Summer senseless in the corner to a chorus of yes chants. Just when things are looking good for Brie, Summer turns the tide with a sizzling spinning heel kick.

Speaking of sizzling, Nikki Bella appears backstage with her bazookas on show. Back in the ring, Summer applies a cobra clutch on Brie twice, the second time coming after Brie nearly manages to escape. Eventually Brie does break free, and her comeback is pretty awesome. After knocking the stuffing out of Summer, the bitchiest member of Total Divas does dodge a missile dropkick, yet then Brie fires back and nails it the second time around. Following that, Brie nails a sick Bella Buster and that’s all she wrote!

Thoughts: Solid night of action, right? Two competent matches and one hilariously batshit plan make for a good episode of Raw. Throw a Russian minx into the mix and then we’ve got ourselves a great episode.

Starting with the match centered around the Divas Championship, I was so into this. Other than AJ’s sloppy spin kick and Alicia’s mistimed big boot, this match was awesome. Alicia’s signature moves were so impressive like always and AJ’s offense was nice too. The highlight however, was the hilarious aftermath. The fake fight had me flabbergasted for a split second and Michael Cole, fair play to him, reacted really well. The writers certainly thought outside of the box to come up with a unique way of putting Alicia over that tied into her and Paige’s nutjob characters.

Speaking of Alicia winning though, she’s pinned AJ twice in recent weeks. Shouldn’t she also get a say in the titl picture? Just saying WWE!

Onto Lana and Rusev, the fake run-in of the soldier fan was an excellent idea in my opinion. Ok, it was clearly scripted but yet again, it was a unique idea I’ve never seen done before anywhere. Plants have obviously been placed in the crowd before yet to use one and try and make it come across as a legit run-in, I thought that was fantastic. Just as fantastic was Lana in that white outfit. Goddess Sandra have mercy on us all!

Finally, Brie Bella vs Jobber… I mean Summer Rae (both are six letters long with a repeated letter in the middle, don’t judge me) was nice too. I feel really bad for Summer, who has become totally irrelevant. All of the momentum she had coming from NXT has diminished big time. Even a slot of a reality show and a movie haven’t helped. Here’s hoping it picks up.

Brie showed in the match that she is really, really reliable and I know her and Nikki will put on a great match at Hell in a Cell. Wrestling win logic says that as Brie won tonight, she will lose on Sunday and that is made even more inevitable because of the match’s stipulation. It’s only a little detail, yet I’m glad Brie won last night with a running Bella Buster. The fluidity of the move makes it look much more impactful than the standing version. I appreciate the little things I guess!

One final note regarding Brie and Nikki’s feud. If Brie is put in matches for her to win and gain momentum, can we switch her opponents up a little? I feel like if (and when) Nikki wins on Sunday, this will happen as Nikki can place Brie in matches against people she won’t want to face off against, like friends in Natalya or Naomi. I guess we’ll just have to wait and see.

Right, it is time for me to depart again for the week. My Hell in a Cell PPV prediction will be coming up at the end of the week here on Diva Dirt and I may just be about to make a bold one!

Until then, in the words of the iconic, returning Hardcore Legend, Mick Foley, have a nice day!