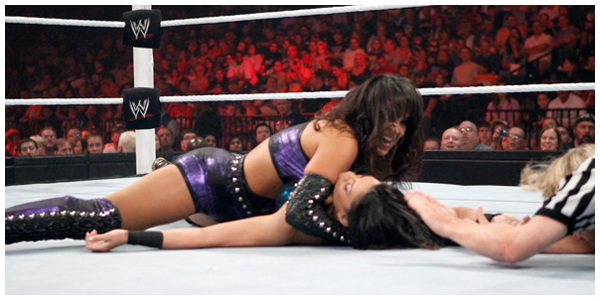 In what I’ll assume is an attempt to make up for the total lack of Divas action on last week’s Raw, WWE booked TWO Divas matches this week. First up, Melina invokes her rematch clause after losing to Michelle McCool at Night of Champions, but this time she has to take on the other half of Lay-Cool: Layla. Check out the match below:

Out first is Layla, accompanied by Michelle and both are sporting shiny, new Divas Championship belts. (I wonder who has the replica. Hmm…) Melina comes out next and she looks like she’s all business. As she does her usual entrance, Michelle joins the commentary booth and informs us that she and Layla are both Unified Diva Champions. She also lets us in on the plan between her and Layla at Night of Champions that fooled everyone into thinking LayCool was on the outs.

The referee signals for the bell and Layla immediately goes on the attack, charging straight for Melina. Unfortunately for Layla, she charges straight into a few vicious forearms, courtesy of Melina. Melina continues the assault with few punches to the midsection, but Layla pushes her away in an attempt to gain the advantage over the former champion. Melina keeps the heat on Layla, knocking her to the mat with a strike to the back and laying her out with a modified curbstomp.

Melina pulls Layla to her feet, but Layla gets the upperhand for the first time in the match so far. She hits a kneestrike to the gut, before tossing Melina out of the ring and to the floor. Layla comes charging like a mad beast, looking to capitalize but runs into a brutal forearm from Melina. With Layla neutralized, Melina sets her sights on Michelle and jumps over the announcing to get to her, forcing Michelle to retreat into the audience to escape.

While Melina is distracted by Michelle, Layla tries to ambush Melina but is foiled yet again. Melina slams the champ into the ring apron a few times for good measure, before tossing her into the ring. Layla goes for a clothesline, but Melina evades with her Matrix move and hits a snapmare driver. Layla struggles to her feet, but Melina knocks her back down with a dropkick. Melina starts pummeling poor Layla with forearms, but Layla ties herself up in the ropes, forcing a break.

Layla charges at the challenger once again, but Melina lifts her up and sits her up on the top rope and proceeds to rearrange her face, prompting the referee to step in and force the break. Sensing her opportunity, Layla kicks Melina in the face and execute a brand new finisher — a flipping stunner off the turnbuckle — for the win.

While this match was enjoyable, I found myself liking it a lot less than the title match at NOC. Layla and Melina don’t have nearly as much chemistry as Melina and Michelle, and it showed in the early going of this match. I found their initial exchange to be very sloppy. Thankfully, both ladies picked it up and delivered a decent match.

I also enjoyed Melina and Michelle’s interaction during the match. So many times we see babyface Divas smiling and laughing the day after losing their title, but Melina was the polar opposite of that. She was fiery and aggressive throughout the match and even went after Michelle, which was a nice touch.

I also have to give Michelle props for her commentary. Last time we saw a member of LayCool on commentary, it took away from the match. In this case, it added to the match without taking anything from it. It also showed that McCool has become much more comfortable on the mic. Not everyone can flourish at the commentator’s booth (Just ask The Hart Dynasty), but I thought Michelle did very well.

In other Diva news, Eve Torres and R-Truth teamed up to take on Maryse and Ted DiBiase Jr in a rematch of sorts from last week’s Song and Dance ‘match’. Watch the match below:

Eve and R-Truth make their entrance to Truth new song from last week and Eve decides to bust out some truly cringe-worthy choreography. Not to be out done, Teddy and Maryse come out to some new (auto)tunes as well. Apparently T-Pain has inked a deal with WWE. Despite how random and unusual the new theme is for ‘The Fortunate Son’, I’ve found myself liking it. It’s better than hearing Truth rap and watching Eve try to dance at the very least.

The men start the match off, but that’s not we’re here for. DiBiase retreats to his corner after taking a beating from Truth and Maryse tags herself in. Not to be intimidated, Maryse gets right in R-Truth and is rewarded with a pelvic thrust for her trouble. Offended, Maryse makes her patented ‘WTF?!’ face and slaps the taste out of Truth’s mouth. Sticking up for partner, Eve runs in and spears Maryse and catfights for a bit, before receiving a slap to the face as well.

Now in control, Maryse slams Eve’s face into the mat repeatedly and chokes her out on the bottom rope, all the while flipping her hair furiously (Multitasking! YAY!) Eve manages to fight back to her feet with a few forearms, followed by a sweep kick after Maryse misses her French TKO kick. Eve follows up with a flipping senton for a near fall, but DiBiase pulls her out of the ring, breaking up the pin. R-Truth makes the save for Eve, throwing DiBiase to the outside and laying him out with a flying crossbody.

Like I said on the Post Raw Show last night, I wasn’t exactly blown away by this match. I’ve never been a big fan of Maryse and Eve’s work together and this week is no exception. I will admit these two had some good spots though, including the sweep kick and Eve’s finisher, which looked brutal.

The creepy message on the Titantron was my favorite part of segment. I can’t wait to find out who this admirer is and who exactly they’re admiring.

All in all, I enjoyed this week’s Raw for the Divas. We got two matches, some closure on the Melina/LayCool storyline and some progression with the Maryse/DiBiase secret admirer storyline, which is quite the accomplishment for Raw. Hopefully, next week’s edition can live up to this week’s, but judging by the spoilers, I don’t think that will be a problem.