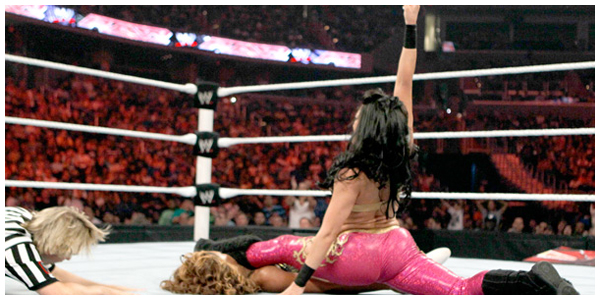 Divas Champion, Melina has to be on cloud nine after single-handedly defeating BFF champions, Lay-Cool last week in a tag team match on Raw. What Melina didn’t expect is that she had to defend her title the very week, despite having a unification match at Night of Champions in a few weeks time. Watch below as Melina takes on the woman she defeated for the Divas Championship at SummerSlam, Alicia Fox:

Melina makes her way out to the ring first and poses for the fans in her usual fashion. Out next is her challenger Alicia, who apparently has something to say. Alicia informs Melina that she will not be competing at Night of Champions. Alicia goes on to say that she will become the ‘undefined champion of Divas’. Hey Alicia, ‘Undefined’, ‘Undisputed’ and ‘Unified’ do NOT mean the same thing. I guess we won’t be seeing Ms. Fox on the mic again anytime soon.

As if that wasn’t bad enough, Alicia follows up by saying she has more Twitter followers than Melina and Lay-Cool combined. I have no idea how Alicia would know this since she has probably never logged into her Twitter account.

After Alicia finishes the referee calls for the bell and our match is underway. The Divas start things off with a lockup, which Melina gets the best of, pushing Alicia into the corner. Melina breaks clean, but Alicia gets frustrated and shoves the champ. Looking to get the jump on her opponent Alicia comes charging, but is leveled with a back body drop, followed by a forearm and a split-legged Yakuza kick, sending Alicia tumbling out of the ring.

With the match not going her way, Alicia decides she’s leaving, but Melina isn’t having any of that. The champion grabs Alicia by the hair and brings her back in the ring the hard way. As Melina tries to climb in the ring, Alicia takes advantage of the opening and goes for an elbow drop. Unfortunately for Alicia, Melina sees it coming and slides back out the ring, causing Alicia to smash her elbow on the canvas.

While Alicia is still reeling, Melina slaps her across the face before hitting a kick to the gut and a top rope crossbody for a near fall. Melina tries to stay on top of ‘The Foxy One’, but Alicia takes he down with a drop toe hold, sending her throat first into the ropes.

Now in control, Alicia starts taking it to Melina with kicks and clubbing blows to the back. Alicia charges at Melina for a clothesline but Melina evade with the Matrix and lands a kick in the gut and follows up with a flurry of strikes.

Alicia manages to reverse an Irish Whip and charges Melina in the corner, but Melina jumps up and into position for the Last Call. Luckily, Alicia has Melina scouted and flips her over the top rope and onto the apron. Alicia grabs Melina by the hair and drags her into the middle of the ring, but Melina lands a kick to the head, sending Alicia into the ropes. Before Alicia can recover Melina hit the Sunset Split for the win.

This was probably the best match that Alicia and Melina have had since their Smackdown days. As we said on last night’s Post-Raw Show, Alicia and Melina Pre-Summerslam and Summerslam matches left a lot to be desired and this match was a lot more enjoyable than those two matches.

Unfortunately, this match won’t be known for it’s ring work, but for the epic fail Alicia made in her promo. Most of it was decent, but that flub at the beginning overshadowed the entire promo. I guess WWE will be making the Divas mute again.

Also making an appearance was Diva Dirt’s Sexiest Diva of 2010, Maryse. Check out the segment below:

I haven’t been the biggest fan of the Maryse and Teddy combo, but I have to admit: it’s really starting to rub off on me. As we’ve said countless times before, Maryse shines most when in a non-wrestling role and it shows here. Fifty percent of this promo was in a foreign tongue and I still enjoyed it. Kudos to Teddy as well. It seems he has finally gotten comfortable with this pairing and it shows. I don’t feel like Maryse is overpowering him so much anymore. With a good storyline and a bit of fine-tuning, I feel like these two could truly be a power couple in WWE.

All in all, I enjoyed the Divas on this week’s Raw. We got a decent title match, closure on the Melina/Alicia feud and a potential new storyline with Maryse and Teddy. In my opinion, this week’s show blew that crap they called a 900th Episode Spectacular out of the water. Let’s just hope that Raw can keep up the good work at least until we crown our ‘undefined’ champion of Divas.