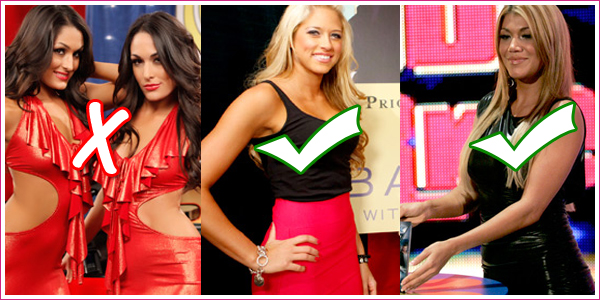 It was a bittersweet episode of Raw last night. On the one hand, Bob Barker was a lot of fun but on the other hand, you just knew with Barker hosting Raw most, if not all the Divas would be relegated to ‘Barker Beauties’. And lo-and-behold, that’s exactly what happened. In fact, WWE felt there weren’t enough ‘Beauties’ on Raw, they decided to import the Bella Twins from ECW — with no explanation, I might add. I guess they have to earn their paycheck somehow.

Seeing them last night made me realise just how jealous I am of them, it must feel pretty great to get paid a ton just to coast along and do little to no work. It’s not their fault however, but in an economic downturn, shouldn’t WWE be putting all their stars to work to justify their wages? The Bellas get to travel the country, look pretty, hardly ever wrestle and get paid! Like I said: jealous.

So I don’t even have anything to write about in this week’s Redux because there wasn’t a match! I think WWE’s logic is that they had two matches last week, so they can afford to skip this week. Plus with the ultimate Diva, Trish Stratus hosting Raw next week — those stupid Diva fans, they get Trish next week, that’s enough ‘Divas action’ to justify not putting them on last night. Somehow I doubt Trish will get quite as much screen time as Bob Barker did last night, though. I fear also, that next week’s Raw may be a throwaway in the Diva stakes. If Trish really were really the booker and it wasn’t scripted, one would assume she’d want to put over the Divas and give them a prominent role next week. But because Raw is scripted, the writers will probably put Trish in a match as our quota-filling Divas bout next week. Sure it’ll be nice and nostalgic to see Trish wrestle again but Raw is already in a lull and we need some semblance of storyline to break this holding pattern. Honestly, I am not expecting anything out of the norm that will champion the women’s division next week, even though the guest host is a legendary former Diva that was once part of said division. That’s WWE writers for ya…

Speaking of Trish, she is the first female guest host of Raw since the gimmick began in July. So what do you do? You tack on a much hyped guest appearance from an injured top Superstar! Because God forbid, a woman… A WOMAN… is not a big enough draw on her own. Yes Trish, not even you — the quintessential, legendary Diva — can be trusted to carry Raw on your own. Even though she has more personality than most of the past guest hosts and will be more exciting to watch than Dusty Rhodes’, Sergeant Slaughter’s, Jeremy Piven’s and Freddie Prinze Jr’s weeks combined! It just shows how much faith WWE has in a female guest host, even the most popular female wrestler of all time, can’t get a show to herself without the added Batista appearance. Don’t be surprised if over the next week, the Batista announcement gets more hype from WWE than Trish Stratus as guest host.

With Kelly, Jillian, Rosa and extra added flavour in the Bella Twins, four Divas were left off the show and I wouldn’t have it any other way. Thank God they were! Alicia Fox, Beth Phoenix, Gail Kim and Mickie James were given the shove last night and perhaps it was for the better. I’m actually a little surprised they decided not to use Alicia Fox when she fits the same ‘Barker Beauty’ model role they used Kelly, Rosa and the Bellas for. But I think  Alicia should be flattered and consider it a compliment, considering the company she’s in with the other Divas that got snubbed. It suggests to me that Alicia isn’t seen as a ‘model’ by WWE anymore and in my eyes, that’s a good thing. She has too much potential and talent as a wrestler to be doing double duty that kind of degrades the progress she’s making.

Anyway for the rest of this week’s Redux, I am going to critique the Divas we did see in a ‘Best & Worst Dressed’ of Raw. And in honour of Bob Barker hosting Raw, instead of ‘Best’ and ‘Worst’, I’ll use ‘Right’ and ‘Wrong’. Follow the cut for more:

So as you can see at the top, we have a spiffy banner with all the Divas and their ranks. Let’s break it down individually:

The Bella Twins: So WRONG they’re not even on the right show! I hope you enjoyed your trip to Raw ladies, but back to the abyss [ECW] please! Those dresses are just unforgiveable.

Jillian: RIGHT. Jillian looked cute, despite the awful singing. [No picture for Jillian, because there weren’t any decent ones on WWE.com]

Kelly Kelly: RIGHT. Big thumbs up for K2, ditching her usual trashy outfits for something mature, classy and simple. She looked really good.

Rosa Mendes: So RIGHT it hurts. Rosa deserves to win ‘Fierce Bitch of the Year’ award, if there is such a thing. She’s finally found a colour pallette that complements her [black] after ditching all the gaudy ruffled tops, as Erin pointed out and she is working the eff out of it. That weave that we giggle over so profusely looked much better straightened.

Enjoy our content? Please consider making a donation to Diva Dirt so we can continue bringing you more!