Recap: Tara and Brooke Tessmacher on MTV’s MADE 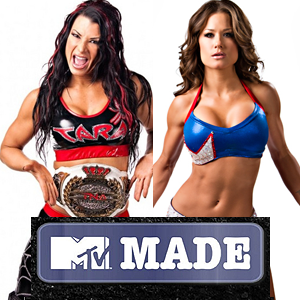 On the latest episode of MTV’s MADE, TNA Knockouts Champion Tara attempted to make an aspiring female wrestler into a Knockout. Did she succeed? Read our recap below to find out:

* DeAnna Washington, unemployed and living with her parents in Washington, wants to be a professional wrestler. She says she always had a desire to perform. She went to school for music, but then decided to pursue nutrition and fitness. The job hunt is not going well.

* She says that wrestlers represent strong, independent and confident women. Growing up, she looked up to Trish Stratus and Chyna. In school, she never played sports because her mother disapproved.

* Her coach, Tara, showed up as her house to surprise her, but DeAnna didn’t know who she was (ouch!). She tells DeAnna she’s going to fly her out to Mississippi to train before a Live Event.

* Tara told her a bit of her background and how she got into wrestling. She told her she came into it with fake nails and no idea of what she was getting into. It was scary and she got beaten up, but her perseverance got her respect from the men.

* DeAnna’s mom met Tara and didn’t think she looked like a wrestler. She said she looked more like a model.

* In Mississippi, Tara meets DeAnna in the ring in an empty autotorium. She demonstrated some basic moves with a unnamed guy. She then invited DeAnna back in the ring and brought out Velvet Sky as an example of a sexier, showier Knockout. Both Knockouts started bumping and showing DeAnna how to run the ropes.

* Tara thought she did well and was surprised. DeAnna attended a TNA Live Event that night to watch Velvet in action against Angelina Love. Angelina interacted with DeAnna during the match, trash talking, and Tara defended her. Velvet won the match and gave DeAnna a post-match hug, wishing her good luck.

* Back home in Texas, Tara did some one-on-one training for two weeks, showing DeAnna some basic moves. Later, she surprised her with news that she would receive a tryout match with TNA.

* Tara asked her if she watches Impact, and she said she didn’t. She think DeAnna should be embarrassed about that, and is worried that if DeAnna looks like an ass, she (Tara) looks like an ass. DeAnna watches Impact that next week, where Tara has a match. Her family watches the show with her and isn’t impressed. They say it isn’t a sport. Her sister says she wouldn’t let her daughter watch it. Her mom says it’s not dignified or ladylike; it’s trash. She says they’re acting like savages and a man that likes that is a “porn fan”. It’s low life. Her mom was expecting the violence, but not the trashiness. She says she won’t go to DeAnna’s tryout.

* DeAnna is upset and tells Tara about it, and Tara says her mom was controlling too. She says having your family’s support is important.

* During training, DeAnna is sloppy and not confident. Tara is afraid she’ll get hurt or hurt someone else. She’s afraid DeAnna’s problems with her family are distracting her. Going into her tryout, Tara isn’t sure she’s ready, but she hopes she is.

* For her tryout DeAnna gets a glammed-up makeover, wearing a lot of gold and glitter. DeAnna meets her judges: Al Snow, Robbie E and Robbie T. DeAnna tells them she has the drive and sex appeal to do this. She shows them her bump skills.

* DeAnna then has a mock match with Brooke Tessmacher. Al Snow tells them to keep it simple. Brooke tells DeAnna that her feet aren’t right and she’s not confident. After the match Al Snow tells her she has heart and drive, but not the skill. However, many people with experience and skill lack the heart that she has.

* At Slammiversary, Al tells DeAnna that he can’t offer her a contract, but wants her to continue training. He says she’ll compete in a live event match in Houston that Saturday, teaming with Tara. She tells her family about this, and they are disappointed. They don’t think it’s a good opportunity, since she won’t get a job out of it. This disheartens DeAnna, who thinks she might be wasting her time.

* DeAnna decides that she wants to become a personal trainer instead of a wrestler. Her mother approves of it. She says she couldn’t find job opportunities to become a wrestling trainer.

* DeAnna gets upset, and Tara tears up too. Tara doesn’t want her to give up on herself. Tara leaves and figures she won’t see her again.

* DeAnna goes to talk to her sister and tells her what happened. Her sister tells her that she should take advantage of the opportunities she has to get a job now, which at this point means pursuing personal training.

* DeAnna says it could have taken years to become a wrestler and is glad she turned to personal training. She has started her own personal training business, held a fitness bootcamp and has already signed two clients.

Recap by Diva Dirt. Do not reproduce.

What did you think of the episode? Tell us in the comments!