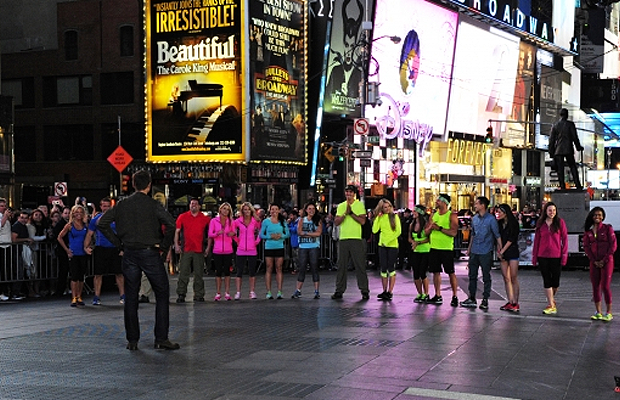 The 25th season of The Amazing Race features a team that gives every wrestling fan someone to root for: TNA’s Brooke and Robbie E.

Each week, as long as Brooke and Robbie are in the competition, we’ll recap the newest episode, updating fans on where #TheWrestlers stand in the race.

The season all starts in Time Square, where the teams are introduced and grab their first clues and head to Flushing Meadows Park.

The clue at the globe instructs them to fly to St. Thomas island in the U.S. Virgin Islands. However, there are only seats for five teams on the first flight. The rest will have to wait for the second flight, which takes off 40 minutes later.

Brooke and Robbie aren’t among the first five teams, so they’re stuck on the second flight.

When they arrive in St. Thomas, they all book seaplane flights. Brooke and Robbie, unfortunately, are at the very back of the pack in 11th place.

When the seaplane lands, the teams must climb a rock and leap two stories into the Caribbean Sea, where they’ll grab their next clue. This takes them to a pirate ship, where they get another clue that leads them to the first road block. They must use a liquid compass to locate buried treasure, in which is stowed another clue.

This directs them to the first pit stop: Fort Christian. The last team the check in there will be eliminated.

As most of the teams land and start digging, Brooke and Robbie are making their way to the rock, currently in 10th (next to last) place. They make the leap off the rock, claiming that it’s nothing – put a table there, and they’d do it.

Despite sinking their boat on the way to the shore, Brooke and Robbie manage to find their treasure so quickly that they leap right into 3rd place.

They end up making it to Fort Christian in 4th place, but not after taking the “scenic route”.

The Realtors find themselves in last place, getting eliminated from the competition. Brooke and Robbie live to fight another day!

What did you think of the premiere? Do Robbie and Brooke have a shot at winning?

RELATED: Exclusive: Brooke Adams and Robbie E on The Amazing Race, What Gives Them an Edge on the Competition