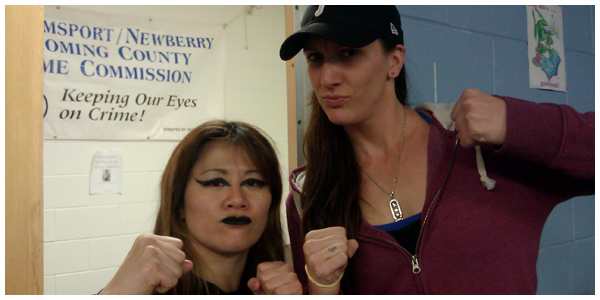 As well as the Femmes Fatales show in Montreal, a few other female wrestling tidbits of note:

Jersey Shore star Angelina Pivarnick made another appearance for TNA tonight at the company’s house show in Rahway, New Jersey.

She, along with Cookie, escorted Robbie E to the ring for his triple threat match with Kazarian and Shannon Moore.

In a pre-match exchange on the microphone, Kazarian blasted Cookie and Angelina calling referring to them as byproducts of when a midget and a garden gnome have sex. Full report from that match here.

Pivarnick is currently training in Jersey at the Independent Wrestling Federation.

Uematsu made her debut for CHIKARA and picked up the victory in a near-15 minute match in Wiliamsport, PA.

She won with a hurricanrana into a cradle, according to CHIKARA’s Twitter feed. You can see full results from the show on their Twitter also.