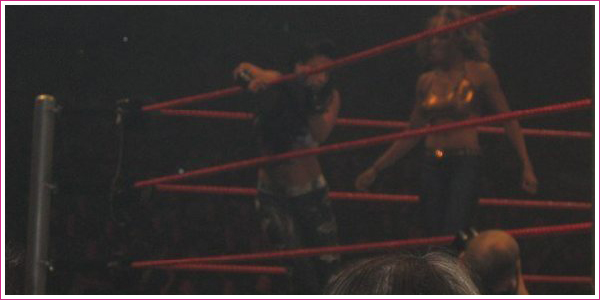 Divas Champion, Melina and her new #1 Contender, Alicia Fox have been working the house show circuit together on the current European tour and Diva Dirt reader Elle was lucky enough to attend last night’s show in Newcastle, England. Check out her detailed fan report & pictures below:

Firstly, Jillian came out as the guest ring announcer with tremendous heat (I haven’t ever been to a live before and I was like wow to that lol). She did a little skit saying she didn’t really just come to the UK to announce a Divas Title match but to sing. She ‘graced’ us with her rendition of one of Sting’s songs, now I’ve always thought when I watch the likes of Raw “Why do people exaggerate and cover their ears when she sings?”, but my god it was awfully high pitched and well awful lol. Then Melina’s music hit and she recieved a fair amount of cheers but as always still wasnt as many as the amount for the least liked babyface of the night which was primo.

Jillian’s announcement for Melina was pretty hilarious, she said: “It’s Melina… meh, she stole my tittleeeeeeeee, and shes gonna lose her title… it’s Melina.” Then it was Alicia’s turn the crowd was quite literally dead and you could even hear people just having random chit chat but I couldn’t help cheer for her ‘cos well, it’s Alicia haha. Jillian continued her lil skit: “And here is the girl who is going to take my beloved title… no not me… Alicia.” She even attempted to get a little Alicia chant going but was greeted with mass boos. Jillian ventured to ringside and had a little fight with the ref and refused to let him take the title similar to when she won on Raw, she even had a little hissy fit which the audience laughed at her for. Similar to Alica’s entrance there was practically no audience awareness for the first half of this 8 minute match. Jillian randomly shouted to Melina: “I’m gonna bite your nails off.” (Erm huh?)

Alicia seemed to take control of most of match with her usual moves such as tilt-a-whirl side walk slam, several headlocks and such . Then Melina got on the offensive but unfortunately made several very clear botches such as an armdrag which Alicia tried to cover up with a belly to belly suplex that looked awkward and Melina sadly messed up again with some move which went so wrong it was totally unclear what move she was trying to do and Alicia didn’t know what the hell to do! Melina finally got the audience on her side like I said around half way through, with that move in the corner, not sure what it’s called lol. When she did her scream in the corner before jumping on alicas body, this was followed by another scream and a facebuster and the audience went wild which was AMAZING. She got more cheers than santino and believe me he got loads. She then followed up with her Primal Scream finisher which sounded and looked awesome, great selling by Alicia as ever. Overall, apart from the few botches by Melina this was a great match — such a shame it wasn’t televised.

Check out the pictures below: