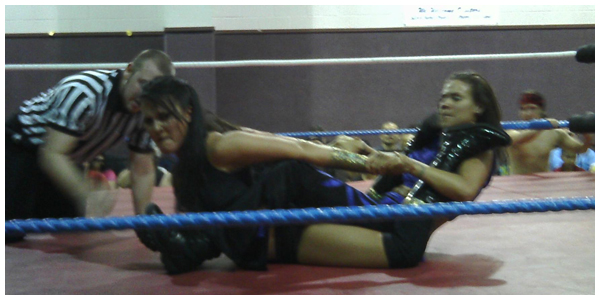 Diva Dirt reader, Brandon, sent in the following report and pictures from last night’s RCW event in San Antonio, which was headlined by Alissa Flash vs Mercedes Martinez for the RCW Championship:

Last night’s RCW show was amazingly good. It had everything you want out of professional wrestling – straight-up pure wrestling and enjoyable segments. All the action was great, but the one thing that stood out to me more about last night’s event was the main reason I went to the show in the first place – Alissa Flash (AKA Cheerleader Melissa) vs. Mercedes Martinez!

When I found out that Mercedes is coming to RCW in my hometown, I was marking out! Like that got me sold to actually going to this event. I felt disappointed not going when Alissa Flash became RCW Champion, the first female to win the company’s top prize, showing that Alissa ain’t one to play around with, female or not. She is, pound for pound, one of the greatest women wrestlers in, not just the US, but in the world. The same can be said for Mercedes Martinez, another pound for pound athlete, and one of the women that put SHIMMER on the map with her fued with Sara Del Rey, along with Melissa’s fued with Mschif. And with these two in the same ring together, mono-on-mono, I know will expect some great stuff between the two. Now, enough praising the two, and let’s get to the action.

Before the match and throughout the show, Mercedes Martinez makes her RCW debut by coming out to the corner of her (storyline) boyfriend and former RCW Champoin Joey Spector and his boys The Texas Hitmen, thus makes her a heel. First off, let me say this – MERCEDES (in person) LOOKS F’N GEORGOUS! I mean, Good Lord! I knew she looks good on TV, but in person, Martinez looks fresh to def. There was a segment where Brandon Oliver, the onwer of RCW, prompted Spector to get kicked in the balls to keep his job in RCW by a female fan from the crowd. Spector made multiple refusals, until Oliver got to him saying “If you refuse to get kicked in the balls, Mercedes will be striped from her title match with Alissa Flash!” Now this is where I’m in total MARK MODE, cause Martinez pulled out that inner street life in her and went ape sh** on Spector, sceaming “YOU BETTER TAKE THAT NUTT SHOT, OR IM’LL BEAT YOUR ASS, MOTHERF***ER!” (Something like that) lol. I felt sorry for Spector, because Mercedes looks like she about to cut him. (Life lesson – never piss off a Latina!). After getting verbally attacked by his girlfriend, Spector took the nutt shot from a female fan, and Mercedes gets her title shot.

Now for the main event – RCW Championship – Champion Alissa Flash vs. Mercedes Martinez (with Joey Spector and Texas Hitmen). Like Mercedes, Alissa looks goegous, in person. Melissa is doing big things with the Alissa Flash character on the indy scene (way better than what TNA did with her). And as a mark for both Flash and Martinez, I stand up the entire match. Before the match stared, Flash called for back-up in the form of Darci Drake and JoJo Bravo – The Karate Kids, to keep and eye on Spector and the Hitmen. The match, no suprise, is what you expect from two pound for pound athletes, great back and forth, technical wrestling. The girls went hold for hold, strike for strike, big move for big move, from Alissa’s Curb Stomp and Samoan Drop to Mercedes’s Spinebuster and Siato Suplex. Both women attended their finishers (Alissa’s Kudo Driver and Air Raid Crash, and Mercedes’s Fisherman Buster), but to no avail. Nice DDT counter off the Fisherman Buster by Flash. Loved when Martinez was mouthing out the sign guy saying, “I will make you my b***h, if you don’t shut up!” The match ended in a “No Contest” because Alissa Flash delivered a missile dropkick on the referee, knocking him out, and Spector and The Texas Hitmen and the Karate Kids fought in the ring, but the Hitmen made quick work on them. Then the lights went out, and the voice of the Karate Kids’ sensei, Mr.Yebisu, played saying to the Hitmen that “You beat my two students, now you must face my number one student.” And the lights come on and it’s TNA Superstar “Super-Mex” Hernandez, making his RCW return, cleaning house with the Hitmen. Then, in another mark out mode, Mercedes got up and got in Hernadez’s face, had a breif stare off, and shoved Hernandez with force, but no work. Super-Mex blocked Martinez’s strikes and did a salsa dance pose, leaning Martinez backwards, then dropping her. After Martinez, Spector, and the Hitmen left the ring, Hernandez got on the mic, wishing everyone a happy Labor Day weekend, and gave credit to Alissa Flash for being RCW Champion. Then Brandon Oliver came back and announced that on the next show (Oct. 4), Flash and Martinez will have a rematch, and the match will have no interference.

Overall, it was a great show put on by RCW. Lots of great stuff from the wrestler, and Mercedes/Alissa stole the show for me. After the show, I managed to have a picture with Melissa, Hernadez, and Mercedes. I’ll be honest, I was a little nervous talking to Flash and Hernandez, but the come across as nice and very cool people. I pretty much thanked Flash for what she’s done for this industry, and it was really honored watching her in action. Now when I was talking with Mercedes (and no, I didn’t ask her to chop me lol), I was more relaxed with her. She’s very nice, a total class act, and very motivational. Had a great 15 munite conversation with her, and found out that it’s her first trip to Texas. I respond by saying to “Expect great things here in Texas, as for as wrestling!” Now I’m gearing up for the next show next month. Flash/Martinez was great, but I expect the rematch to be 10 times as great! All could say is Thank You RCW. And Thank You Mercedes Martinez and Alissa Flash. Thank You for keeping women’s wrestling alive in the United States.