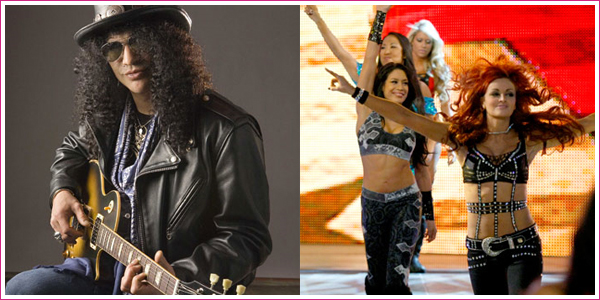 Usually when a celeb comes to a WWE show, they’re all smiley and happy, taking pictures with the Superstars and Divas for WWE.com. Well newsflash: Slash of Guns N’ Roses fame ain’t no Chilli from TLC [she should legally change her name to that by the way]. While WWE may have been happy to prey off his ~star power~ at last night’s SummerSlam with that shot of him in the audience, homeboy wasn’t quite as complimentary as other celebs [shock horror!] on his Twitter page:

WWF female wrestlers look like a bunch of pissed off strippers.

Don’t worry, he’s not totally geriatric. He later corrects himself with “WWE, I mean.” Because that’s the most offensive article in the sentence…

No doubt Slash is referring to last night’s big Diva battle royal [that we didn’t get to see and should be grateful], so I wonder: how do we react? Are we supposed to act offended and claim our territory [“Those are our Divas!”] or do we accept that there is some grain of truth in there somewhere? Judging by Maria’s outfit, I’m not in a position to defend.