Hey guys! Wait, it isn’t Thursday!?!? Oh, I just remembered.. every once in a while TNA puts on these things called Pay-Per-Views. And as the conductor of the DD portion of the Dixietrain, It’s my pleasure to take you through the Sacrifice Pay-Per-View as Angelina Love challenges TNA Knockouts Champion, Madison Rayne! Let’s not waste anymore time getting into the action!

First up, Christy Hemme plays a very important role in the match between Sam Shaw & Mr. Anderson. Catch Christy’s involvement out below:

Up next, it’s the moment everyone’s been waiting for as Angelina Love (as always with Velvet Sky) challenges Madison Rayne for the Knockouts Championship!

I was impressed with the match that these two put on! I thought it was a great mixture of both signature moves and some new things I’ve never seen the girls do before. I do have to say I was quite shocked at the kick-outs near the finish. Angelina hit the Botox Injection for a two, which I would have swore would have been the finish…. and then Madison hit the spear, which I could have swore would have been the finish. We then saw some of the old Beautiful People shenanigans as Velvet busts out the hairspray on Madison which allows Angelina to roll up Madison (using the tights) for the three. And with that, Angelina Love becomes the first ever six-time Knockouts Champion.

I have to give major credit to Madison, I always thought she was good in the ring but over the course of this championship reign I thought she became great. She’s really stepped in terms of intensity and physicality in the ring and I think she deserves credit for that now that her reign has ended.

So, where does Angelina go from here?

I think first things first obviously a rematch with Madison is in order. And then as I’ve talked about previously I can see there being a four-way match between Angelina, Madison, Velvet and Gail Kim likely at the Slammiversary PPV. You also have to wonder what role Brittany will begin to play as well as she begins to have more of a presence with Madison.

Personally, I would have waited until Slammiversary to put the belt on Angelina but obviously it was going to be done eventually. I’m really interested to see where things go from here and what direction they decide to take angle-wise over the Summer.

That’s all for the Sacri….Oh wait… Just one more thing…

During the Tables Match between Bobby Roode and Bully Ray a stagehand threw Bully through a table… But wait, that’s not a stagehand! It’s a bird, it’s a plane, IT’S AUNT DIXIE CARTER! 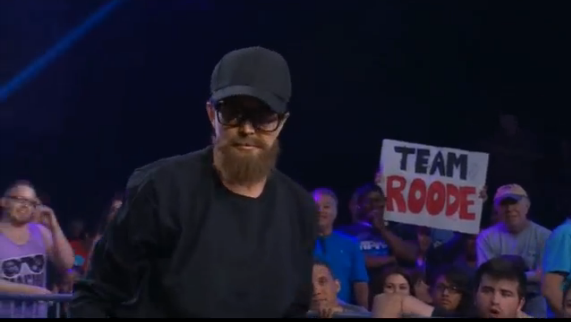 I don’t even care what the angle or the purpose was or what the hell that outfit was supposed to be, Greatest. Beard. Ever. Check out Aunt D shove someone through a table below:

And with that I hope you enjoyed the Sacrifice review!, I’ll see you this Thursday for Impact and until then…Choo Choo!