Sasha Banks and the Bella Twins Discuss Their Careers, The Women’s Revolution and More at Wizard World 2016 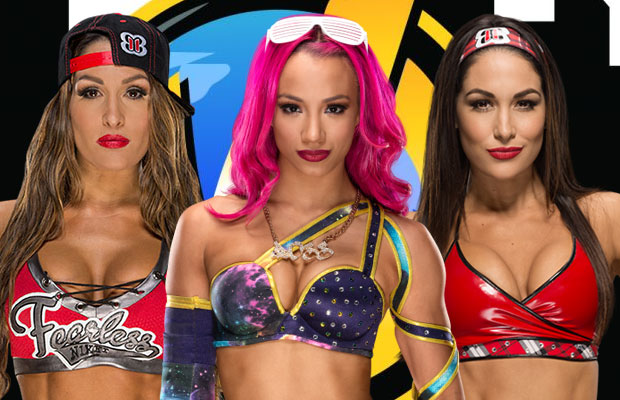 WWE Superstars Nikki Bella, Brie Bella and Sasha Banks attended Wizard World this past week to meet fans and promote WWE at the annual convention. The women discussed many topics such as their dreams in WWE, their favourite competitors,

The twins were asked about their favourite Superstars currently in WWE. Brie’s choice was the Lunatic Fringe Dean Ambrose whilst Nikki chose the Architect Seth Rollins.

When discussing their dreams within WWE, Nikki spoke about her aspiration to become Women’s Champion upon her return. Brie also chimed in by saying that the pair always wanted Women’s Tag Titles but the lack of female competitors stopped that from happening. Brie also said how she would like to return in a General Manage role, or even wrestle with a baby bump, but of course, biology isn’t on her side with the latter.

The women were questioned on their views on the recent revolution in the division and both of them stated how there is still a lot of room for improvement. Nikki wished there could be more drama whilst Brie isn’t a fan of how storylines reach sudden endings that make no sense.

When asked about current WWE World Heavyweight Champion Roman Reigns, Nikki praised the man by saying that he is a good wrestler and is very attractive. The two also joked about how his hair is better than WWE Women’s Champion Charlotte’s (something she also agrees with).

A fan asked the two whether they would rather feud with each other again, or if they would team up against Sasha Banks and Stephanie McMahon in a tag team match. Both agreed that they would have more fun teaming against the Boss and the Billion Dollar Princess.

The topic of Nikki Bella’s return was very popular at Wizard World. The Total Divas star managed to answer these queries by announcing that her final scan is in July and that she is hopeful that she will return to the ring by then.

When asked about their dream tag partners, Brie said that she would love to team up with Jeff Hardy, whereas her sister Nikki chose Matt Hardy.

The twins were also asked about the much discussed Bellas vs Besties match that fans are demanding to see. The former Divas champions both said that they are very keen to have it take place in the near future.

The very anticipated reality show Total Bellas was a hot topic at the convention. One question in particular lead to the women teasing that there is a big fight between the two that takes place on the show, and they’re both particularly embarrassed to watch it air this fall.

At one point a fan asked the two about their favourite gears to wear in the ring. Brie said that hers is the ripped pants whilst Nikki feels most comfortable in her snapback, socks and sneakers combo.

Both of the Bellas responded to a fan question about their best friend backstage saying that the Queen of Harts Natalya is their best pal.

With a few submission specialists on the current roster, a fan asked the two which submission is the most painful to be in. Brie said that hers is Charlotte’s Figure Eight and Nikki chose Natalya’s Sharpshooter.

The pair were then asked to tell the audience what match was their favourite to compete in. Nikki said tha hers was against Paige on the RAW before Wrestlemania 31 whilst Brie’s favourite match was, of course, her SummerSlam match against Stephanie McMahon.

The first question Sasha was asked was about her whereabouts for the past month or so. As reported earlier, The Boss suffered from a concussion caused by a referee.

A fan then proceeded to ask Sasha what her proudest WWE match was out of TakeOver: Brooklyn, the Iron Woman match, or her Wrestlemania 32 Triple Threat. Sasha couldn’t choose a favourite as she said how all three were “amazing”. She stated that her matches at Brooklyn and Respect were part of history, whereas Wrestlemania was always a dream of hers, so it’s hard to pick a favourite.

On the topic of the Iron Woman match, Sasha said that she didn’t plan on ripping the headband off of Izzy’s head and only came up with it as she was (jokingly) “so sick” of constantly seeing her there, though, she soon felt really bad after she’d made her cry. When asked about her emotions and preparation for the match, the former NXT Women’s Champion said that it was “really hard” to train as it was the first time a woman would main event a WWE pay-per-view as well as the fact that the high quality of the Brooklyn match made outdoing it a difficult job. Banks said that she spent a lot of time doing cardio, watching Iron Man matches and tons of praying that people would like the match. She also felt a lot of emotion as she knew that it would be her last match at NXT.

The Boss was then asked what she sees herself and Bayley achieving come SummerSlam 2016. Sasha said that TakeOver may return to Brooklyn so she hopes that her friend can win back the NXT Women’s Championship and debut on RAW the following night. In regards to her own career, Banks hopes to wrestle Charlotte at SummerSlam and become the new Women’s Champion.

As the Boss is related to Hall of Fame 2016 Inductee Snoop Dogg, a fan asked Sasha what her favourite Snoop song is. After some thinking, Banks decided that her favourite song of his is his remix of “Sky’s The Limit” that he performed at Wrestlemania 32.

A Tough Enough auditionee took to the mic to ask Sasha for some advice on becoming a professional wrestler. Sasha said that when she started training she didn’t have a car or a license and that she took the train, went on rides with other people, and did “anything [she] could to get to training.” She emphasized that to succeed one must be the “hardest worker in the room” and “never give up.”

In regards to the change between the Diva’s Championship to the Women’s Championship, Sasha said that Stephanie and Triple H told her backstage in Brooklyn that the change would happen and even showed her the design. Banks remembers crying at the moment and thinking about how far the division had come over the years. The Boss stated that she always knew that she would change the title as there was “no way that [she] was going to hold the Butterfly belt.” Sasha also felt proud of the fact that not only did the belt itself change, but the term “Diva” also being removed made her feel proud to be a part of history.

Sasha was soon asked why she chose WWE over other wrestling promotions. She said that she chose to go with the WWE as not only was it always an aspiration of hers, but those around her would be doubting her success. So, by going to NXT she ended up proving her doubters wrong whilst simultaneously living out her dream.

What were your highlights from the Wizard World convention? Let us know your views in the comments below!