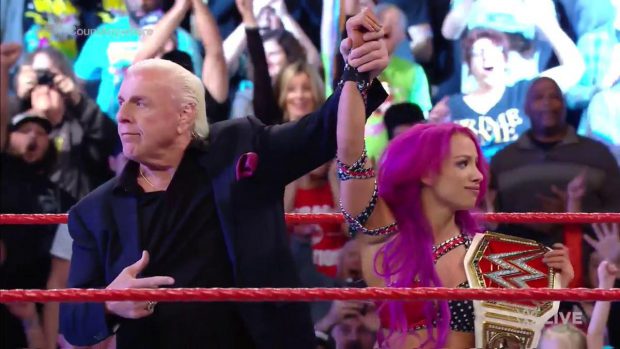 Tonight on Raw, Sasha Banks captured her third Raw Women’s Championship during the main event of Raw; this just a few weeks after both women had previously served as the first women’s main event in twelve years.

The #RAW #WomensChampionship Match will NOT end with a countout. It'll restart later tonight as a #FallsCountAnywhere Match! @RealMickFoley pic.twitter.com/hGye3ZMcPi

Earlier on Raw, Charlotte Flair and Sasha Raw Women’s title rematch ended in a No Contest after a double count out but acting Raw General Match Mick Foley announced that the two Superstars would restart their match under Falls Count Anywhere rules later in the night.

At the Raw main event match, the challenger got the better of the champion early on, sending the Charlotte to the outside of the ring and pinning her after a dive through the second ropes and an outside suplex. Charlotte regained control of the match, slowing down Sasha with various submission but the action spilled to the outside ring again after Charlotte landed a big boot to Sasha, knocking her off the apron.

After kicking out of an elevated Natural Selection, Sasha found a kendo stick which she would use as a weapon to combat Charlotte and the Figure Eight.

Instead the action made its way through the live audience and from there, Sasha trapped Charlotte through a railing and locked in the Bank Statement, forcing Charlotte to tap out.

Post match Ric Flair came out to congratulate and salute Sasha on her win, who had earlier in the night, had said she would dedicate the match in his honor.