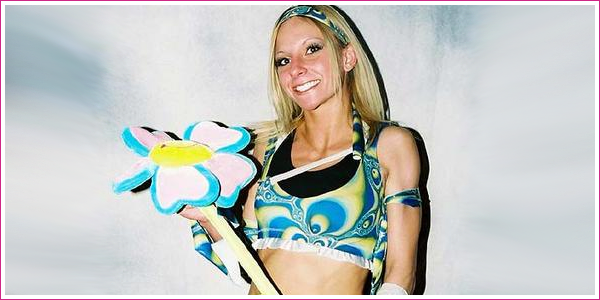 I’ve gotten a few comments from you readers here at Diva Dirt. It seems you would like to see more of SHIMMER Spotlight. YAY! Ahem, so I bring to you, my friends, the second installment of SHIMMER Spotlight.Â
Â
Name: Daizee HazeÂ
Age: 25Â
Aliases: The Haze, SheliriousÂ
Entrance Theme: “Sensi” by Long Beach Dub AllstarsÂ
Finisher(s): Mind Trip (Snapmere Driver); Heart Punch; Yakuza Kick; Daizee Cutter (Stunner)Â
Accomplishments: APW Future Legend Champion (1 time); Chickfight 6 winner;Â NWA Midwest Womens Champion (2 times); Ranked # 15 on PWI Female 50 last year.Â
Â
They say that dynamite comes in small packages. That has never been more true than in the case of Daizee Haze. Pound for pound, this flower toting phenom is one of the toughest girls in SHIMMER.
Â
In the 7 years since her debut, Daizee has wrestled in Ring Of Honor, TNA and a whole mess of midwest promotions. All while spreading love with her peace-loving, pot smoking hippie gimmick. She’s even been a valet to Matt Sydal or as you may know him Evan Bourne.Â
Â
While she’s slight in stature, Daizee has had some of the most exciting matches in women’s wrestling. She’s gone head to head with Mickie “Moose” Knuckles, Lacey, Cheerleader Melissa aka Raisha Saeed and current Knockouts Champion, Awesome Kong.Â
Â
Speaking of Knockouts, it seems TNA may have their eye on The Haze. You may remember seeing Daizee compete on Impact against Cheerleader Melissa. Awesome Match.Â
Â
In addition to being one of the most decorated female wrestlers on the indies, Daizee has added one more feather to her cap. The Haze has been named the Head Trainer at SHIMMER’s training facilities. I guess we’ll have her to thank (or hate) for the next generation of Divas/Knockouts.Â
Â
Daizee has openly expressed her disdain for the amount of sex appeal used in pro wrestling today. That being said, I would have to say TNA would be the best place for The Haze. I just don’t see her fitting in very well with the Divas roster. I would love to see a Kong/Daizee rematch or even Saeed vs Daizee. Oh, the possibilities! Here’s a few vids to get you familiar:Â