SHINE 22 Tomorrow on iPPV: Full Card & How to Order 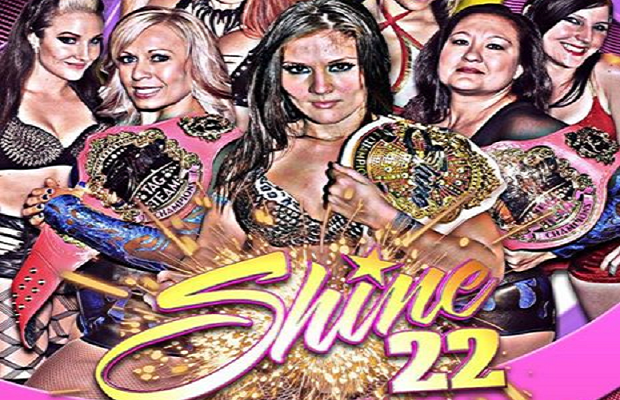 SHINE Wrestling returns to the Orpheum in Ybor City, Florida tomorrow night for SHINE 22, which will air live on iPPV.

With SHIMMER on the horizon, a host of international stars are in the States, making for some dream ties. The main event is a mouthwatering matchup that sees SHINE Champion Ivelisse put her title on the line against former SHIMMER Champion, Australia’s Madison Eagles. This will be Eagles’ first SHINE appearance since SHINE 18 in April, while Ivelisse will be looking to veer back onto smoother terrain after her narrow escape against Nevaeh at the previous SHINE event.

In the SHINE Tag Team Title picture, it’s youth versus experience as champions Legendary (Malia Hosaka and Brandi Wine), accompanied by Leilani Kai and new accomplice Thunderkitty, face off against Daffney‘s Buddy System (Heidi Lovelace and Solo Darling), who would love nothing more than to continue their winning streak while picking up gold in the process.

Meanwhile, following the culmination of her titanic feud with Jessicka Havok, Allysin Kay finds herself in a state of limbo. However, the Valkyrie member has a chance to get herself back on her feet tomorrow as she takes on New Zealand’s Evie in singles action.

SHINE’s newest stable is “Valifornia”, consisting of BTY (Marti Belle and Jayme Jameson) and Nevaeh, led by So Cal Val. They’ll be facing the cross-continental force of The Lucha Sisters (Mia Yim and Leva Bates) and Australia’s Kellie Skater.

Also, Leah Von Dutch continues in her pursuit of the “dinosaurs” of women’s wrestling – this time taking on another former SHIMMER Champion, Britain’s Saraya Knight, who was less than impressed with Von Dutch’s description of her – and one can’t help but wonder if this time, LVD may have bitten off slightly more than she can chew.

Nikki Storm has become more popular with every visit across the Atlantic she has taken, and this time the Scottish star takes on Valkyrie’s Taylor Made, who picked up a rare singles win at the last show and looks to keep that momentum going.

SHINE 22 takes place tomorrow night at the Orpheum in Ybor City, Florida, at 9pm ET (2am GMT) and comes to us live on iPPV. Click here to order the show. If you can’t watch, Diva Dirt will have live coverage of the show.