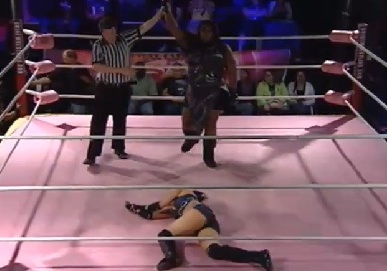 As the newest women’s wrestling promotion in North America, SHINE Wrestling might be accused of having ideas somewhat above their station, but four months on from their debut show they are already establishing themselves as one of the most consistent producers of quality women’s wrestling in the world today.

This Friday’s show (which was trending on Twitter throughout the night) was no different, as we saw a main event that featured the triumphant return of Amazing Kong (formerly Kharma/Awesome Kong), making her first in-ring appearance since her WWE release, being picked by the veteran Jazz to help take on her arch-nemeses Rain and Mercedes Martinez in tag team action.

In a very physical and fiercely-contested match that saw Jazz get isolated and worn down for much of the bout thanks to some shrewd teamwork and bending of the rules by their opponents, Kong made sure that her return to wrestling ended in victory, crushing Rain (who got injured during the match) with an Implant Buster. It wasn’t quite the totally devastating, dominant performance that we tend to expect from Kong, who is clearly still on a light schedule, but she looked great and made sure that her short amount of in-ring action was spent wisely, also hitting both Rain and Martinez with a huge double powerbomb from the turnbuckle earlier in the match.

While Kong’s return was certainly a marvellous sight to behold, it was a tag team match between Made in Sin (Allysin Kay and Taylor Made) and the makeshift team of Leva Bates and Kimberly that stole the show. Between spiked bras and “Thing 1 and Thing 2” costumes, these four remarkably talented young women put on a fantastic performance that, considering how fun it was to watch, must have been stupendously enjoyable to be involved in. As for the result, well, Kimberly’s losing streak continued as Made in Sin got the win, and she reached the end of her tether, attacking her partner Leva in a fit of frustration.

A number of wrestlers made their SHINE debuts at this show, with Athena and former WWE developmental talent Ivelisse facing each other in their first match for the promotion, with Athena picking up the win, while Nikki St John and Marti Belle were both unsuccessful on their debuts, losing to Santana and Niya respectively. Nevertheless, all of the new girls put in stellar performances and we’ll no doubt be seeing them again on SHINE shows in the future. Elsewhere on the card, Sassy Stephie opened the show with a fine win over Heidi Lovelace, while Jessicka Havok and Nikki Roxx wrestled to a disappointing double-countout that was thrown out just as it started to get exciting.

It was refreshing to watch an IPPV with virtually no technical issues (save for my own connection cutting out halfway through the main event, but that’s not their fault!), and the production quality is excellent for a female indy promotion. Also, this show may have made me fall in love ever so slightly with Daffney (whom I wouldn’t be surprised with if she’d had a couple of drinks before – and during – the show!), who is certainly one of the more entertaining ring announcers and colour commentators I’ve heard in recent times. I was in stitches with some of the banter at the commentary desk!

At the end of the day, SHINE 5 achieved its aim and then some, providing us with another regular dose of some of the best women’s wrestling on the planet. A sixth show has been confirmed for January, and I for one am already waiting eagerly to see what unfolds!