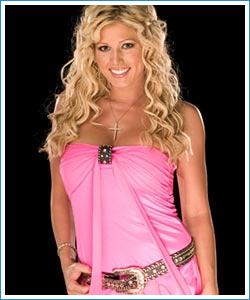 As our ‘5 For 500’ countdown comes to an end, who better to be #1 than the original SmackDown Diva, Torrie Wilson? When you think SmackDown, the first Diva you think of is Torrie. While Trish Stratus dominated Raw, Torrie Wilson defined SmackDown. From feuds to advertising campaigns, Torrie was everywhere during her turn as a SmackDown Diva.

Among the Diva’s highlights on SmackDown include her unforgettable feud with Dawn Marie. This soap opera storyline unfolded before our eyes every week and even Torrie’s real life dad, Al, got involved. The segments between these two were often SmackDown’s highest rated segments in 2002, outdrawing some of the show’s top stars at the time including Brock Lesnar, The Undertaker and others.

In 2003, Torrie brought sexy back when she posed for the cover of the May issue of Playboy. This signalled the return of legendary Diva, Sable – Torrie’s next high profile feud. The pair eventually teamed up in 2004, scoring a victory for the blue brand in a Playboy Evening Gown Match over Raw Divas, Miss Jackie and Stacy Keibler.

After leaving SmackDown for fresh pastures on Raw in 2005, Torrie returned in 2007 and picked up exactly where she left off – as the show’s top Diva. Torrie was eventually sidelined with injury and later retired in 2008. However, her mark has been left on SmackDown for generations to come as the Divas Championship, currently held by Maryse was originally intended for The Covergirl.