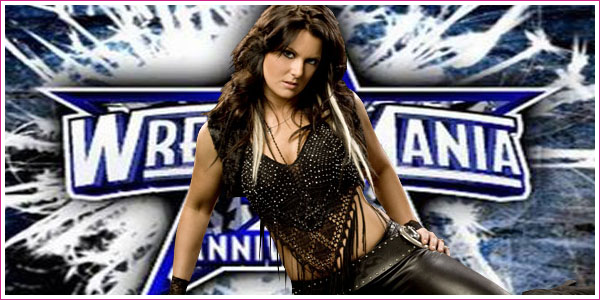 With the Divas Battle Royal at WrestleMania 25 quickly approaching, Diva Dirt has decided to take a closer look at each of the known and rumored participants in the matchup and assess their odds of winning as being High, Moderate, or Low. The winner, of course, will be crowned the first ever â€œMiss WrestleMania.â€ This is a new feature that will take place right up until the big day in Houston, TX on April 5th, 2009 and will be covered by yours truly, the â€œMouth of the South,â€ Hassan! I will save my prediction for the winner as the very last WrestleMania Spotlight profile I do. Be sure to leave your opinion in the comments! Letâ€™s get right into itâ€¦ next up is ECW Diva Katie Lea!

German-born Katie Lea is without a doubt one of the WWE’s most decorated athletes. She was brought into the WWE to push a controversial incest storyline that surely pushed a lot of people’s buttons, but I personally didn’t have a problem with it. Though it was not “PG,” I thought it was something new, different, and unexpected, which for a Diva storyline to have is definitely a good thing. When she finally did enter the Women’s division, she set her sights on then-Women’s Champion Mickie James by claiming that Mickie slept her way to the top, which was a play on Mickie’s on/off screen relationship with John Cena. After a few matches with Mickie, two of which she won, Katie Lea finally got a title shot at WWE’s Night of Champions pay-per-view, where she lost the matchup to Mickie.

Though she came close to winning gold, Katie Lea suffered harsh criticism by management and fans alike for her chemistry and ring work with Mickie.Â  I don’t particularly think it was very fair; her matches weren’t terrible, certainly better than some of the matches we get today, and her rivalry with Mickie was the only storyline she got on Raw before being sent over with Paul Burchill to ECW on December 30, 2008.

Since things didn’t go over well with Mickie, Katie Lea became Jillian 2.0, that is, she was basically a jobber. Her move to ECW saved her career, in my opinion, since on Raw she wasn’t a title contendorÂ  and she wasn’t standing out. I predicted she would move to SmackDown, and although she is doing decently well at standing out on ECW, frankly I still think she’d be a better fit on the blue brand. Now she is in the Land of Extreme, taking on the likes of Alicia Fox and hopefully, more Divas to come. If a suitable Divas division forms on ECW, Katie Lea would surely be one of the top Divas. However, try as she might, WWE still has her pretty much confined to both jobber and managerial status, which I think is a complete and total mistake. Do they not realize what she has accomplished and how talented she is? Katie Lea’s been in this industry since she was 18 and has earned a respectable name for herself, but WWE continues to under-utilize her and restrict her to being tormented by the likes of Hornswoggle. I like her at ringside in Paul’s matches, but I like her much better in the ring.

Though there probably isn’t a chance of her winning at all since she isn’t involved in any type of Diva storyline, I’m going to give Katie Lea the credit she deserves and not completely rule her out, because if it were based on talent, then Katie Lea would definitely have a shot of winning.

Katie Lea’s Odds of Winning On The Hassan-O-Meter: Moderate