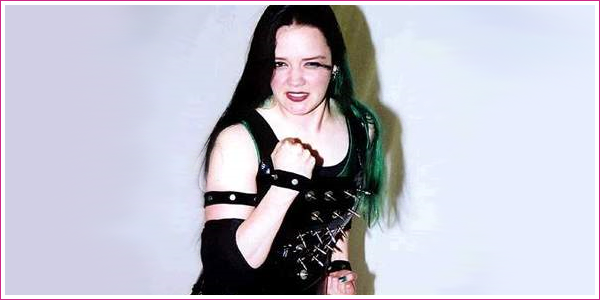 Entrance Theme: “The Pagan Swords Of Legend” by Hecate Enthroned

This week’s SHIMMER Spotlight is dedicated to the queen of the hill, current SHIMMER Women Athletes Champion, MsChif. The veridian maned brawler has foughtÂ her way up from obcsurity in the indies to become one of the most critically acclaimed athletes in women’s wrestling today.

Not much is known about MsChif’s life prior to her career in pro wrestling. She originally debuted in Gateway Championship Wrestling, feuding with the likes of Daizee Haze and Nikki Strychnine (which was voted the feud of the year by the promotion). She even managed to win the GCW Light Heavyweight Championship and defended it against Evan BourneÂ among others.

After leaving GCW, MsChif took to IWA Mid-SouthÂ to make a name for herself. She rekindled her feud with Daizee Haze, while starting new ones with Mercedes Martinez and Mickie “Moose” Knuckles.Â As a member of IWA, MsChif picked up several titles, not all exclusive to women. But her big break came in 2005, when she joined the ranks of SHIMMER.

In MsChif’s SHIMMER debut, she took on fan favorite Cheerleader Melissa, and gained a upset victory. This match would be the catalyst to SHIMMER’s most notable feud to date. In Volume 2 of SHIMMER, MsChif lost to Beth Phoenix and during her match on Volume 3 against Lexie Fyfe,Â Melissa Came to ringside and distracted the diabolical mistress. The two went on toÂ feud for the severalÂ volumes,Â participating in numerous SHIMMER firsts:Â First Hardcore Match, First Last Woman Standing Match and First Falls Count Anywhere Match. However, MsChif and MelissaÂ madeÂ amend to take on The International Homewrecking Crew,Â formingÂ aÂ tandemÂ knownÂ playfully by SHIMMERÂ fans as MelisChif.

When theÂ tournament to name the firstÂ ever SHIMMERÂ champion was announced, MsChif was definitely aÂ favorite to win. MsChif won her first tournamentÂ match, defeating Lexie Fyfe butÂ lost herÂ semi-final match to relative newcomer Sarah Stock. AfterÂ a picking up a tag team win against Allison Danger and then champion, Sara Del Rey, MsChif was granted a title match against DelRey in which sheÂ became theÂ second ever SHIMMER Champion. She has since defended her title against DelRey,Â as well as Mercedes Martinez and Jetta. She has also taken to defending her SHIMMER title in big brother promotion, Ring Of Honor in SHIMMER’sÂ offÂ season.

If I had toÂ pick between TNA and WWEÂ for MsChif, I wouldÂ definatelyÂ pick TNA where her athleticÂ skills andÂ uniqueÂ looksÂ would be bothÂ welcome andÂ appreciated. However,Â according to Pro Wrestling Illustrated, MsChif has been named asÂ a “must-sign” by WWE and TNA scout. Alas,Â only time will tell. Here’s aÂ fewÂ vids ofÂ  ‘Your Soul’s Tormentor’ to get you familiar.Â Enjoy!