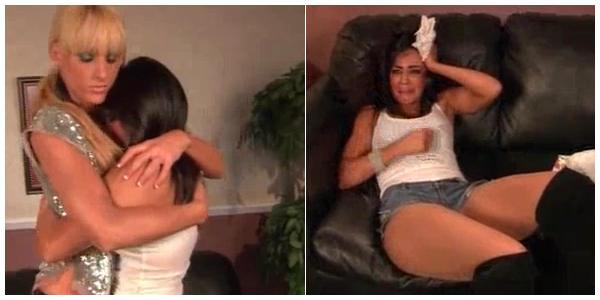 Happy Good Friday and Earth Day! I hope you all celebrated Jesus and everything he did for us if that is your religious belief and I also hope you recycled because it’s important to protect our planet. Welcome to another wonderful edition of the SD Redux and without beating around the bush (because I have nothing witty to say) lets on with the show. This week’s Diva portion of SmackDown kicks off with a replay of the Lay-Cool disaster from the previous week, as well as a new edition of Couple’s Therapy. Lets take a look at how it all played out this week.

Michelle McCool and Layla are both dressed much better this week than last. Layla returns to being sexy in short shorts and a wife beater, and Michelle is also rocking daisy dukes, as well as a slinky silver, off-the-shoulder top. LOVING it! Michelle tells the doctor that this therapy has been working wonders for them because last week on SmackDown, Layla lost yet another match! Michelle gives a sarcastic “yay” and Layla pretty much kills her with a dirty look.

In no mood this week, Layla fights back. She points out that at least she is competing and spitefully tells McCool that she did such a great job on commentary. Michelle merely rolls her eyes and tells Layla that she wouldn’t even be here if not for her (Michelle). Layla claims that couple’s therapy was her idea but that’s not what Michelle is referring too. She says that Layla wouldn’t be here in general, meaning in the WWE, and then she calls Layla a dummy. Michelle says that Layla has done nothing but ride her coattails and that is why she is a semi-successful WWE Diva.

Then Michelle asks for her coat back, the one Layla apparently took when she took Michelle’s shoes.

The doctor encourages the girls to stay on topic and both of them snap at him to shut-up. Layla firmly believes that Michelle gave her the coat, thus making it hers, but Michelle just accuses Layla of always wanting what she has, like the championship. Layla doesn’t appreciate that and says that she was as much Diva’s Champion as Michelle was. Layla also says that they’re probably in a slump and that if Michelle doesn’t start showing her respect then there won’t be a Lay-Cool anymore.

Emotionless, Michelle says that’s fine with her; Lay-Cool probably shouldn’t be together because Michelle doubts that Layla is flawless.

Layla’s face crumbles and she looks like she is about to cry. She gets up and tries to walk off, but Michelle jumps up and grabs her. She quickly apologizes to the other girl and says that she doesn’t want to see Layla cry. Michelle embraces Layla and they hug it out. They pull apart and Layla walks over to the therapist and thanks him for his time. Michelle uses the opportunity to attack Layla from behind and just generally be a bully. She heels it up and storms out of the session leaving Layla a confused, battered mess.

Interesting turn of events though I’ve been expecting this for awhile. Layla took her beating well and this week’s segment was MUCH BETTER than last week’s. I love the fact that Layla just didn’t roll over and die when Michelle was berating her, and Michelle’s heelish ways were so delicious this week. The attack from behind after the hug was vintage heel and if either Layla or Michelle end up traded to Raw on Monday without us getting at least one match between these two, I’m going to feel really, really cheated.

As far as the rest of SmackDown goes, former WWE Diva Lita returned…. kind of!

The co-number one contender to the World Heavyweight Championship, the delicious Latin sensation, Alberto Del Rio, is in the ring and he has decided to throw a retirement party for Edge tonight. The ring is set up for a party and what party would be complete without gifts? Albie and his cronies, Brodus Clay and Ricardo Rodriguez, have come bearing gifts. The first is a grandfather clock because apparently retiring while in your late thirties makes you way over the hill. Personally, I just think being in your late thirties makes you sexier, but anyways. The second gift Alberto has for Edge is a pack of Depend undergarments. It’s nice to know that if I ever retire to England they have the name brand adult diapers. To demonstrate what they’re for, Alberto holds one up to his crotch area.

Finally the third gift is something Edge will really enjoy. Albie cues the people backstage and the theme music of the one… the only… LITA begins to play. The crowd goes absolutely wild but of course it isn’t Lita that comes out. It’s a horrible caricature of the former extreme queen. An overweight woman strolls down to the ring and honestly, the look on Brodus Clay’s face is priceless. Albie is dancing and flirting with this fake Lita as she heads to the ring and he makes Brodus hold the ropes for her. Fake Lita gets in the ring and Alberto tells her that she’s never looked better. He also kisses her hand.

This is the second time I’ve been jealous of an overweight person. Remember Margarita from NXT who got to make out with Lucky Cannon?! Now this girl gets charmed by Alberto Del Rio. I haven’t employed the GTS system yet so please, show me some love!

Ahem, now that’s out of the way…

The gifts keep coming after Fake Lita. Ricardo rides out on a motorized scooter complete with oxygen tank strapped to himself and finally that brings out Edge. Reckon his telenovela audition didn’t go as well as he planned? He is still on television speaking English, not that I’m complaining. He calls everything in the ring, including Fake Lita, a fifteen hundred pound bag of poop and when Albie orders Brodus to attack the ailing Edge, the Rated R Superstar gets ready to fight. Brodus lumbers towards Edge but out of nowhere Christian appears with a ladder. I have a total moment and Brodus gets annihilated. Fake Lita, Albie, and Ricardo have to scurry from the ring before they suffer a similar fate. Alberto may have gotten caught but honestly who cares because this is a women’s wrestling website.

Christian places the ladder in the ring, climbs that sumbitch, and grabs the championship that has been hanging above the ring for the entire broadcast. He hoists it high in the air and SmackDown fades with the image of Edge clapping, Christian as “champ”, and this writer marking like a no-good fan girl. Yes, I’m shaking my head.

Now why did I cover this?

Well number one because I can. And number two, with all the rumors circulating about Lita possibly returning to wrestling why not cover it? She’s been featured in all the Edge goodbye packages and she’s been mentioned by a lot of people recently. As suggested on Twitter, wouldn’t it be amazing if she returned at Extreme Rules alongside Edge and helped Christian win the World Heavyweight Championship?

What if Christian and Lita teamed up and Alberto teamed up with a Diva? Lita versus Rosa Mendes anyone? Well, that might be stretching it but Hell, why not?! The more random the better. Now lets wait and see if Awesome Kong rips to pieces a red-headed doll…