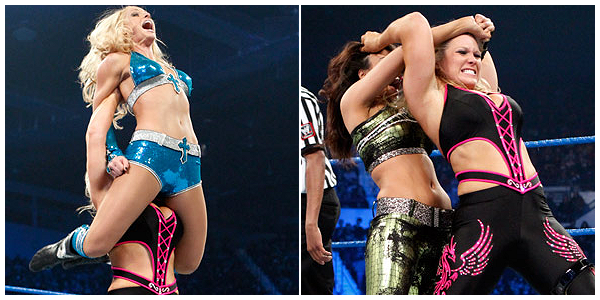 SmackDown tonight provided us with the perfect ending of the year. Glama-Hart and Lay-Cool put together one last blow off match (I think…) and it was nothing short of spectacular.

Backstage at SmackDown, there’s a party going on. Superstars, Divas, general managers, and a leprechaun are milling around as Rosa Mendes comes into focus. She’s hanging out with Hornswoggle for whatever reason. She’s feeding him cheese cubes from a silver platter and makes the comment that two thousand and ten was a pretty good year for her. ‘Swoggle starts making noise, so Rosa corrects herself and says that it has been a good year for “them” and that now, it’s time to celebrate. NXT rookie, Conor O’Brian, appears and stands over Rosa’s shoulder. He eyes her platter of cheese and begins to sniff it. Rosa freaks out a bit and wants to know what he’s doing, all the while turning away from him in disgust. Conor says that he admires Rosa’s cheese and his face starts to twitch. Thankfully for Rosa, the sexy Latin stallion, Alberto del Rio, walks over and demands to know what his rookie is doing. Conor motions towards the cheese and an apologetic Alberto turns to Rosa. He tells her not to mind his rookie and makes a comment about Conor looking like a rat. He then turns to Conor and warns him to leave the lady alone (Rosa smirks), as well as the thing (‘Swoggle enunciates). Alberto and Conor, as well as Ricardo, walk off and Teddy Long stands up on a platform. He welcomes everyone to the party and asks for volunteers to come up and make New Year’s resolutions.

Cue Drew McIntyre who gets up and smiles at Kelly Kelly. He says that all of us can mark it down that in two thousand and eleven, Drew will be a champion. He turns to Kelly and adds that he also wants to be a better person. A smiling Kelly seems to approve of this and unfortunately that probably means that in two thousand and eleven us fans are going to be subjected to more horribly acted segments between these two. Womp womp.

Random Observations: Kelly Kelly is really pretty. Beth Phoenix, Natalya, and Kaitlyn were also standing around and mingling in this segment.

Later on during the party, our famous and flawless duo of Michelle McCool and Layla arrive. They interrupt Teddy Long as he is about to give his new year’s resolution.

Teddy asks Lay-Cool if they have come to make their resolutions and Layla responds with a sassy “oh honey child please!” The girls say they don’t need to make resolutions because they’re flawless. They go back into bitch mode and Michelle tells Teddy that what isn’t flawless is the fact that he claims they lost the tables match at TLC. Michelle remarks that herself and Layla were to skinny to break the table. Michelle claimed that it was actually Natalya that broke the table and Layla added that at TLC, pigs flew. Both girls ponder what would have happened had Beth flown as well and Michelle tells Teddy that he’s darn lucky both herself and Layla were still alive. Beth and Natalya walk up and Beth asks Lay-Cool if they want to repeat their insults while she and Nattie are standing there. Michelle obliges. That leads to an argument between the four that gets pretty loud until Teddy steps in. He makes a tag match for later on that night and of course Lay-Cool aren’t happy.

Random Observations: I couldn’t help but “lulz” over the fact Natalya called herself a little piggy and Layla quipped that there was nothing little about the third-generation Diva. Laughs all around. Backstage segments that set up matches make me happy. And a happy Cryssi, is a positive Cryssi. So far, so good for SmackDown.

The backstage party rages on. Kaitlyn is off to the side with Chavo Guerrero, who is still trying to find ways to liven things up. He grabs a balloon and tells Kaitlyn to pay attention. He puts a hole in it, sucks out the air, and introduces himself. Low and behold he is shocked to find out that the balloon doesn’t have helium, a fact that Kaitlyn is all to happy to point out. Chavo gets annoyed and walks off, while the camera cuts to Chris Masters who’s running around shirtless. He starts making his pecs dance and then we go to Hornswoggle who is shirtless as well (gag). Guess what? His “pecs” can dance too. Kaitlyn likes it and walks off with him. They pass Kelly and Big Show on the way. The Big Show looks concerned about Kelly and expresses that. He says that as her B-F-F he wants her to be careful with Drew because he just doesn’t trust him. Kelly listens and thanks him for looking out for her.

Why is the WWE doing this to us?

After a few promos and a commercial break, SmackDown returns with Lay-Cool in the ring. They’re talking amongst themselves and fixing their hair in their Slammy awards. Beth’s music hits and she walks to the ring with the Diva’s Champion. Once the posing and whatnot is finished, Beth and Michelle start the match. They lock up with Beth getting the immediate vantage and wrenching the arm of Michelle around at an obtrusive angle. Michelle is unable to counter it which gives Beth a chance to show her strength off early and lift the former multi-time champion up in the arm. Michelle screams like she is about die and Beth casually drops her down to the mat with a thud. She walks over to Michelle, grabs a hold of that arm, and tags in Natalya.

The champ comes in and together Glama-Hart send Michelle into the ropes. When she comes back at them, they take her down with a double shoulder block and Beth exits stage left. Natalya goes for a quick cover but that’s certainly not going to be enough to put away Michelle who almost immediately kicks out. They get back to their feet and Michelle tries to mount her first real offensive attack of the night, but Nattie is quick to halt it. She dumps the former school teacher on her back and attempts to twist her into the Sharpshooter but Michelle’s not having it. She fights against Natalya’s strength and gets to the ropes which of course means Nattie has to break the hold. Michelle crawls through the ropes to the apron on the outside and kicks Natalya back as she tries to follow her. Michelle scrambles back into the ring and gets Natalya quickly into position for the Faithbreaker. The savvy champ is at the ropes and grabs onto them. Michelle is unable to pull her off so she just flips her over the top rope, but Natalya is able to land on her feet. Michelle levels her with a tremendous kick and the crowd gasps as Natalya is laid out on the apron of the ring. The evil ‘Cool taunts the fans as SmackDown goes to commercial break.

When it returns, our little English muffin Layla has entered into the bout and she has Natalya locked in a solid body scissors. It takes some time for the powerful Canadian to fight her way out of it and when she does, it almost backfires on her. Natalya tries to pick Layla up in the air, but her knees buckle underneath her and she falls to the mat. Layla lands on top of her and hooks the leg. Natalya is able to kick out though. Natalya crawls to the corner and gets up right as Layla starts to charge. She swiftly moves out of the way and Layla goes crashing into the turnbuckle. Natalya scrambles to her corner and makes the hot tag to Beth.

Layla rebounds quickly upon seeing Beth and swings at her with a huge clothesline. Beth ducks and brings the Diva Search winner down. She taunts her before running to the ropes and taking a huge a fall on the outside.

Oh Michelle, what a sweet little move that was.

The referee goes to check on Layla and Michelle begs her tag team partner to make the tag while Beth is withering around on the outside of the ring. Layla finally does get the tag and she jumps down from the apron to harass Beth. She slams the Glamazon’s head into the apron and kicks her around. Beth sprawls out against the apron and Michelle scoots in while holding Beth in a severe choke. Michelle follows it up with several knees to Beth’s back and Layla manages to get a cheap shot in as well. The Lay-Cool offense continues this time with Layla getting tagged in. She picks up where Michelle left off and Beth eats a face full of canvas. Layla gets Beth into a modified looking version of the crossface and slow by surely, with the crowd spurring her on, Beth begins to power out of it. She ends up flipping Layla down on her back and trying to crawl over to her corner. Layla tries to stop the tag from happening by grabbing Beth’s foot, but the powerful blonde kicks Layla back and makes the tag to the Diva’s Champion.

Natalya comes in on fire and starts working over Layla. She gets the other woman down in position to be pinned and goes for it. Layla kicks out at the last minute and Natalya figures out that it’s time to go for the Sharpshooter. Layla fights off the first attempt and Natalya rolls through the second attempt. She locks it in, drags Layla to the center of the ring, and Michelle comes flying in with a huge kick right to Nattie’s jaw. The champ is laid out. Michelle drags Layla to the Lay-Cool corner and Layla makes a groggy tag.

Michelle comes and nails Nattie with a right. Michelle wants to go for more but Nattie is able to reverse a whip into the ropes and she throws Michelle down. With her opponent down, Nattie makes the tag to Beth. Beth comes in, thwarts Michelle’s offense, and promptly throws her up in the Glam Slam. The match comes to an end and Glama-Hart ring in the new year with a gorgeous victory.

Random Observations: Looooooooooove this match. I really think the WWE is going in a positive direction with the Divas. This match had everything, including a nice chunk of time. Flawless. What more is there to say?

Actually, I can think of one more thing.

I hope that 2011 brings a positive change for the Divas. They seem to be building up their division again and the solid matches we’ve seen as of late prove that these girls can go in the ring. They ended things the right way tonight. The match was solid from start to finish. The segment that set it up was great as well and I’m excited to see what the new year brings for the girls of the WWE. Call me crazy, but I think it’s going to be a big year for the Divas.