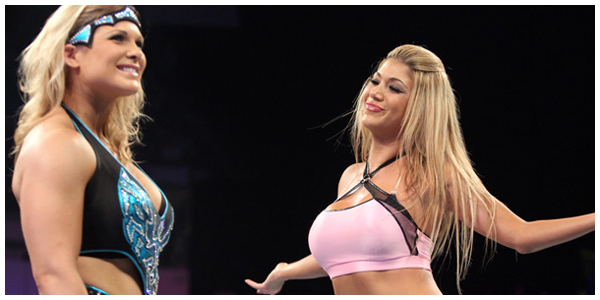 I know what you’re thinking, who the hell is Marosa? It became evident watching last night’s episode of WWE Superstars that feisty Latina, Rosa Mendes is trying to remodel herself as SmackDown’s answer to the French poodle Maryse — complete with a bilingual promo. Where have we seen that before? Oh wait, just this past Monday on Raw… albeit in French. So, in case you haven’t already deduced: Maryse + Rosa = Marosa. In her first appearance as a SmackDown Diva — on Superstars — Marosa took on her former mentor, the Women’s Champion Beth Phoenix.

But before the match, we got a backstage segment between Kelly Kelly & Team Lay-Cool which nicely sets up a tag team match for tonight’s SmackDown. Watch below:

It looks as though Lay-Cool have picked their next target, having already picked on Mickie James and Beth Phoenix, branding Kelly ‘Smelly Kelly’. Kelly actually speaks! Not that you would know from watching her on Raw for the past two years. It was nice to see her being able to actually be part of a segment and I thought she did a good job here with Layla and Michelle. Enter Vickie Guerrero and the two pin her down as Vickie sprays her. This results in Kelly screaming at Vickie, calling her the ‘official cow’ which was pretty hilarious and almost matched Maryse clocking Eve with the Divas Title on Raw. Now enter the Glamazon who clears house along with Tiffany. Not a bad little segment, it’s rare to see something like this on Superstars.

Next up we have Beth Phoenix vs Rosa Mendes. Beth comes out first followed by Rosa who makes a really peppy entrance. I had called for Rosa to move to SmackDown in the Diva Draft feature and this is part of the reason why. She may not be a good wrestler, but she does have some personality that I think WWE could utilise. However, it becomes evident that the personality they want Rosa to show is Maryse’s… Rosa cuts a promo in Spanish and English, introducing herself and telling Beth that she’ll soon beat Beth for the title. “Adios Glamazon,” she says and I don’t know why but it made me laugh. Rosa then beats the microphone against Beth’s chest a few times, almost taunting her — resulting in the announcers calling her ‘muy loco’. Rosa definitley showed some personality and flare here.

The match begins now with Rosa trying to push the Glamazon who is unmoved and instead, Beth retaliates with a shove of her own on Marosa. Rosa then gives Beth a pretty hefty slap that looked great, but it seems to have just pissed Beth off even more. Beth smirks and hoists Rosa over her shoulders and plants her over the corner turnbuckle before kicking her in the gut. The Glamazon then tosses Rosa across the ring by the hair before hitting her with a clothesline. Beth whips Rosa into the corner, Rosa counters but Beth manages to find her feet and uses the ring ropes to her advantage, jumping over Rosa and hitting her head off the turnbuckle.

Beth delivers a few forearms but is pulled away by the referee, she then runs at Rosa who moves out of the way and Beth meets the turnbuckles. Rosa then hits a splash on Beth in the corner. Rosa then runs at Beth and kicks her, meanwhile it looks like Beth is hurt as she limps to her feet and tries to use the ring ropes to sustain herself. Rosa runs at Beth again but this time Beth wraps her arms around Rosa and manages to counter into a school girl to take the victory.

A pretty interesting and eventful night on Superstars with all of the SmackDown Divas making an appearance minus Serena. There was some storyline growth, some character development and a short match but I thought it all worked well. The match was hardly exciting and ended abruptly due to Beth’s injury but it was a nice way to showcase Rosa. I really like that she shows some personality even though she’s not a great wrestler and I thought she had a great presence when she was cutting her promo, acting like a crazy biatch. It’s a shame that WWE has pretty much given her the Maryse trademark in her promos and it comes across as second rate, I think it’d have been just fine if she didn’t do the whole bi-lingual thing.

As for the backstage segment, it set up the direction of the Divas going forward — it seems like Kelly is the new victim of Lay-Cool. However, I have to wonder where this leaves Beth who is the Women’s Champion after all. It seems like the focus is now on Kelly and Lay-Cool who will be in a match on SmackDown, while the Women’s Champion gets relegated to Superstars. Even despite losing the Women’s Title, the spotlight is still firmly on Michelle it seems. With Lay-Cool moving onto feuding with Kelly, what does that leave for Beth? Shouldn’t Michelle be more focussed on a rematch against Beth than calling Kelly smelly?

Overall though, I thought it was good night with plenty of ground covered. Perhaps even better than Monday’s Knockouts segment on Impact. What does that tell you?