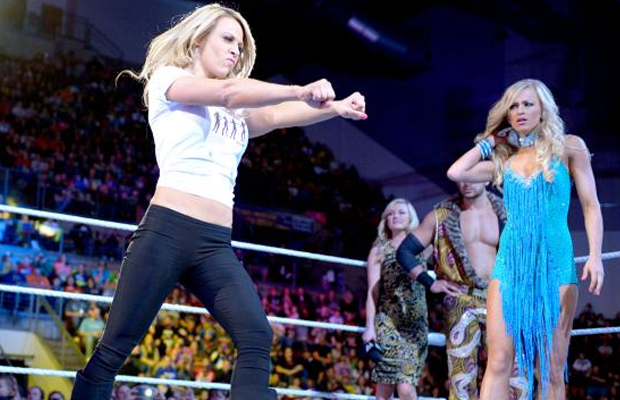 This week’s SmackDown, like Raw, didn’t feature a Divas match. It did, however, have a dance-off between Emma and Summer Rae, which is the second these two have had since Emma’s WWE debut. Let’s see if this one has more action than the last:

Emma and Santino enter second, as Summer and Fandango received the non-coveted “enter during the commercial break” spot. Renee Young is hosting this dance-off.

Summer goes first and tries to branch out from her usual Dancing With the Stars routine, going for a more silly and heelish routine that JBL dubs Footloose moves. It’s the female Kevin Bacon, everyone!!

Emma is next with what she calls the “Advanced Shopping Trolley”, which she does while circling around Summer.

Summer then tells Renee that she wasn’t ready and wants a do-over. She asks them to play her “baby boopsy”‘s music and decides to fall back on her usual dance moves, ending in a split.

Emma goes for round two, and busts out her signature moves to her entrance music.

Based on the crowd reaction, Emma wins the contest. Summer isn’t happy about this and tries to throw her out of the ring. Emma reverses it, though, and sends Summer flying through the ropes. Fandango attacks Santino and tries to seduce Emma with his swivling hips. She’s not into it, though, and shove him over a crouched Santino, dropkicking him out of the ring to join Summer on the floor. Santino and Emma then continue their awkward flirting.

As a bonus, here’s SmackDown Fallout, which features reactions from both pairs:

Summer and Fandango are incoherent and flustered, Summer blaming her loss on the fact that she hadn’t stretched before dancing. Menawhile, Emma and Santino continue their cutesy awkwardness. I gotta admit, that was kind of endearing!

Thoughts: This was a nice way to further Emma’s gimmick and get Summer more over has a heel based on her own merits. The guys were there, yes, but it was all about them, and they carried the segment all on their own.

I wish they would have booked a Mixed Tag Team match for Elimination Chamber between these pairs, but maybe they’re saving her in-ring debut for after NXT ArRIVAL which, being aired on the WWE Network, will serve as the mainstream audience’s introduction to her in-ring skills outside of that video package they showed on Raw. I just hope they get her in the ring soon because, as fun as these segments are, they’re going to get old quick! I’m sure they can find some other ways to show off their dancing gimmicks.

And I’m not sure how I feel about this Emma/Santino thing. I guess they want to make her awkward and innocent in a way to make her different from her fellow Divas, and this “romance” is a way to do that. Let’s just hope Tamina Snuka isn’t lurking in the shadows, seething with jealousy and strumming a ukelele.