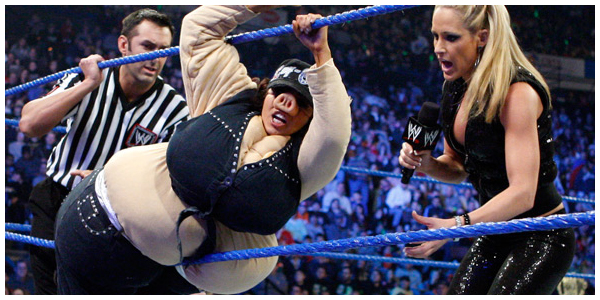 For the past few months, the storyline on SmackDown has centered around Mickie James‘ weight with the Diva being taunted and called ‘Piggie James’. WWE even went as far as to create a graphic like the old Looney Tunes cartoons saying, “That’s all, folks” — a line reused by Michelle McCool on this week’s SmackDown. What became evident on this week’s SmackDown is that the joke is wearing thin and to WWE, I say: “The joke’s over, folks.”

Women’s Champion Michelle McCool discusses the huge favour she did for the fans by running Mickie James off SmackDown last week — complete with replays! Michelle then challenges any of the girls to face her right then and there for the Women’s Championship in lieu of her Royal Rumble match with Mickie. James’ music hits but instead of Mickie, out comes Layla in a fat suit wearing a similar outfit to Mickie’s signature ring attire — complete with hat! Cue a ‘hell to the no’ look on the face of the viewer but the anger soon subsides as Layla begins jiggling around on stage and as offensive as I found it, I couldn’t help but giggle at Layla’s delivery which had some humour in it.

Layla as ‘Piggie James’ makes her way down the ramp before getting on the microphone claiming she didn’t get enough food last week. It was mean but funny. Layla then gets into the ring challenging Michelle for the belt, Layla runs at Michelle in the corner who moves out of the way and trips Layla before pinning her for the win.

The underlying Mickie bullying continues and after last week’s humiliation it was hard to top that this week. I think WWE did such an amazing job last week in making Mickie relatable to the audience and then not to even have her on the show this week was ridiculous. They had an opportunity to capitalise on the way they used her last week and blew it. A quick backstage promo saying she would be at the Rumble and she would prove herself there would have done the trick, I mean how hard could a quick segment like that be? Instead what we got was more childish humour that makes you not care about the angle. Instead of making it seem like a true storyline, as it came across last week, with us wanting to root for Mickie — what WWE has done has made fans roll their eyes and want the childish drama to be over. There’s only so many shenanigans that you can pull off before they start to wear thin and this one did wear thin on the audience.

That said however, I can’t lie and say I wasn’t amused by Layla’s performance here. She does comedy so well and as mean as it may be, I think there’s an SNL-like quality to her acting here that I find it hard to be mad at her. She was given a horrible task to carry but being the entertainer that she is, she gave it her all. WWE Superstars are entertainers and as insensitive as some of the subject-matter may be, Layla did her job and she gave 100% to it which is all that can be asked of her. I think you’d be hard pressed not to shoot a little wry smile as hard as you may try not to.

McCool on the other hand with her opening monologue, in my opinion gave one of her weakest performances in some time which is a shame as I think her acting has stepped up in recent weeks. I don’t know if it was an uncomfortability with the subject-matter or the lack of Layla to bounce off of but she was not good. The performance came off as being forced and unconvincing.

What became apparent to me is that interest in this storyline has piqued. They had a great angle last week to engage viewers and begin building Mickie up week-by-week, showing that she’s beginning to gain her confidence and courage back before taking the title from Michelle. Instead of finally building up Mickie after knocking her down repeatedly, they just opted to kick her once more while she’s down. There’s no protection of the Mickie character when they should have done that this week. WWE is now beating a dead horse and as far as I’m concerned, it’s not for the entertainment of the viewers who are seemingly becoming disengaged, but for the entertainment of those backstage.

With the Royal Rumble on Sunday, even if Mickie wins the title — the damage is already done. Not that WWE has ever cared to protect the integrity of a Diva character but when you’ve flogged Mickie as much as you have, I assumed that this would be an exception and we’d eventually see Mickie begin to rise from the ashes. Even if she wins the title, it won’t be enough to restore her character’s integrity because there should have been a gradual rise to that point, where we saw Mickie’s confidence grow and grow to where she would eventually win the title.

I say give the belt to Mickie, gravitate into a three-way storyline between Mickie, Michelle and Beth as has been teased in recent weeks and shift the focus from the ‘Piggie’ angle to Beth and her current tweener-ness. Can Michelle trust her? Can Mickie trust her? Can anyone trust her? There’s no reason why Mickie and Michelle can’t continue feuding but by shifting the focus to Beth and her character, the stench of the ‘Piggie’ storyline which will hopefully be wrapped up at the Rumble, won’t follow into the second part of this feud. Pardon the pun, but it’s time to stick a fork in the ‘Piggie’ storyline — it’s done.

Food for thought: Is it time to end all the ‘Piggie’ jokes?