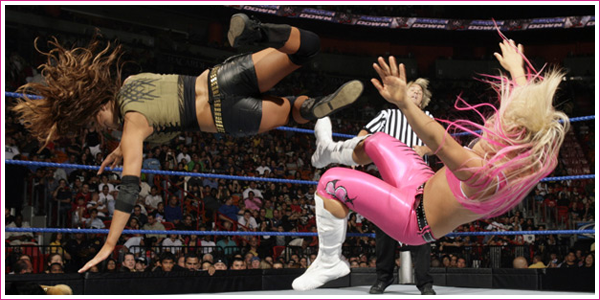 After the fire returned to the Michelle/Melina feud last week, one would think that the WWE would want to capitalize on this and keep the momentum rolling. But of course, this is the WWE we’re talking about, so it only makes sense for them to leave those two off next show COMPLETELY. I’m not going to get into why this was a dumb move (you all can do that in the comments), so let’s just move past this logic fail and take a look at who did make it onto the show.

Layla, wearing a Miami Heat jersey (she was a dancer for them the year they won the NBA Championship, in case you didn’t hear JR say that every.single.time. she’s wrestled). JR says she’s part of the reason Shaquille O’Neal watches Smackdown. (Actually, I saw him in person at a RAW in Miami back in 2005, so maybe he’s a bigger fan of the red brand.) Layla takes the mic, saluting Miami. She displays some decent mic skills, though nothing to write home about. Though, when you’re going for a cheap pop in your home town, how much skill do you really need? She puts down the mic and cues a seizure-inducing music and lights combo and then starts to dance.

Her dancing is of the “basketball half-time dancer” variety, which makes sense with her background. Still, it’s a little strange with one woman doing it – it’s one of those things that look better synchronized with several other girls. Alone, she looks a little bit like she’s having a fit. This goes on a little bit longer than necessary before Carlito’s music hits (scratch that.. it’s Ricky Ortiz). Ricky mocks Layla dancing a bit and goes on a spiel about motivation and inspiration before going for the cheap heat, dissing the Heat. He attempts to “RALLY UP!” the crowd, while Layla looks unamused. He gives her a towel to spin around, and she plays ball a bit, but then drops it, giving him a disgusted look and exiting stage left. I’m not familiar with Ricky Ortiz’s schtick, but I assume dropping his towel is like dropping a cheerleader’s Spirit Stick? No? Okay, I won’t try to rationalize it.

Layla showed a bit more personality than she usually gets to in the various tag team matches she’s inserted into, but I always find it a bit lame when heels become temporary faces in their home towns, just in the name of getting some cheap pops or putting over a heel. Do it like Chris Jericho does – diss your home town! It makes you an even better heel, I promise!

Meanwhile, on the other side of town, Natalya is making her wrestling debut on her new home of SmackDown (yes, I know she’s wrestled plenty of times on SmackDown, but not since the recent trade brought her back to the brand). She’s teaming with David Hart-Smith & Tyson Kidd, forming the team of the Hart Dynasty. They’re taking on the team of Eve Torres & Cryme Tyme. All of this is because of what happened last night on WWE Superstars, when Eve stopped Natalya’s interference in the Hart Dynasty/Cryme Tyme match. Instant followup? I can dig it:

Eve seems to fit with Cryme Tyme pretty decently. Hey, at least it’s better than when Candice Michelle teamed with them. Good lord, she looked ridiculous. Anywho, Eve and Natalya start out the match for their teams. Natalya (or as Michael Cole calls her, Nuh-tall-yuh) manhandles Eve a bit before Eve gives her a funky-looking forearm to put her in her place. Eve tries to get at Natalya, who hides behind the referee and the ropes. Three seconds in the ring must have been enough for her, because she tags in Tyson Kidd. This being a mixed tag match, Eve must tag out (LAAAAMEEEE), so Chad comes in. Natalya can be heard saying “You’ve got a lot of nerve!” repeatedly while on the outside. JR says “someone’s got a lot of nerve”. Not gonna lie, I laughed.

The men wrestle for a while (*snore*) before the action breaks down and Eve tags in, bringing in Natalya. Eve makes a run at her but it met with a scoop slam. She misses an elbow, and Eve takes momentum, hitting a few drop kicks and a forearm. She attempts to irish-whip Natalya into the corner, but it’s reversed. Eve hits the corner but moves, and Natayla gets a shoulder-full of steel. Eve delivers a kick to the head that looks a little unsteady, but Natalya sells it so well it doesn’t even matter. Eve then backs up, performing a cartwheel into a standing moonsault onto Nattie, hitting it beautifully. The men take this opportunity to get involved, and of course the referee robot cannot manage to detect the pin, and Eve gets grabbed by David, who gets levelled by JTG. Natalya gains her bearings, lifting Eve into a hotshot on the ropes and following it with a sick clothesline. This knocks Eve right out, and Natalya gets the pin for her team.

I absolutely love this finisher – you never see Divas do really effective clotheslines, and with the power Natalya packs, it looks devastating. It’s not a fancy-pantsy move, but it’s certainly not something you see every day in Divas matches. The little spin beforehand creates the illusion of even momentum, and gives the move that extra “oomph” and flash. Eve sold it to perfection, too. Here’s hoping Natalya actually gets to use it again in the near future – I want to see her wrestle on a regular basis, WWE. Don’t let me down.

The match itself, as with most mixed tag matches, saw limited Diva action, but I liked the little we got. Eve is steadily improving, and it’s always a pleasure to see Natalya wrestle. The match made her look powerful and intimidating (at least near the end), so hopefully this new gig with the Hart Dynasty gives her the the character makeover she needs after jobbing out for so long following her initial push. I really want to see where this feud goes. It gives Eve and Natalya something to do, and I’d love to see them both do more than just play around in the scenery.

Looking back, it wasn’t all that annoying that Michelle and Melina took the week off. The show was entertaining and fresh, and their absence probably had a little bit to do with that. I’d like for them to keep their feud red-hot from week-to-week, but I really appreciate seeing the WWE give some exposure to other Divas and develop non-title feuds. If a little less Michelle/Melina is the price for that, I’m willing to pay it. Well, this week, at least.. Night of Champions is coming up a week from Sunday, and you need *some* momentum going into the show if Michelle is going to defend her title, as she should be doing.