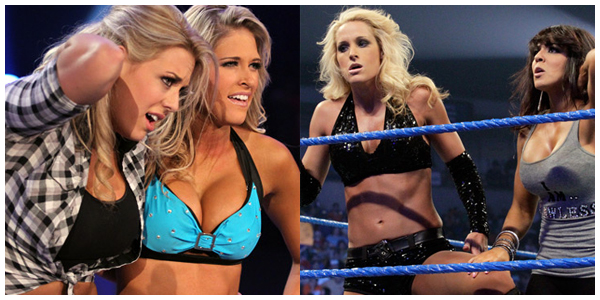 Following last week’s disastrous ‘jump rope-gate’, the pressure was on this week for SmackDown to return to form. So what better way to get back on track than giving us the match that we have been waiting for since the moment Kelly Kelly was drafted to SmackDown back in April? She finally faced off against the co-Women’s Champion, Michelle McCool. Watch below:

Out first is Kelly with her Blondetourage team mate, Tiffany followed by McCool and Layla. As they arrive at ringside, Layla gets in Tiffany’s face and out of no where, Michelle blind sides her and knocks her to the ground. Michelle then grabs Tiffany and head first, throws her into the barricade. What an intense way to kick things off! Kelly Kelly checks on her fallen comrade while Lay-Cool mock her by spraying air freshener into the arena.

As the bell rings, Michelle rolls into the ring and then rolls right back out, exclaiming: “I don’t need to do this.” Obviously a reference to the fact that she, and Layla, don’t take Kelly seriously as a challenger for their belt.

With Michelle on the outside, the referee begins his 10-count but the co-champion rolls in by four — unfortunately for her, she’s met with stomps by an agitated and feisty Kelly. Michelle gets to her feet and kicks Kelly in the mid-section, sending her right down to the mat followed by a kick to the chest. Michelle then strikes Kelly with a swift uppercut followed by a butt bump. Michelle strikes Kelly across the back before hitting her with knees; she then drives her into the corner and begins choking her out with her leg. The referee breaks things up and Michelle begins arguing with him which allows Layla to sneakily spray Kelly with the air freshener can.

Tiffany then re-appears, clotheslining Layla down to the floor and removing the can from her hands. Michelle however, grabs Tiffany’s hair through the ropes and kicks her to the mat. Once again, Tiffany takes a brutal bump to the floor outside.

Kelly, meanwhile, takes advantage of a distracted Michelle — rolling her up from behind for the 1, 2, 3.

Despite being yet another short segment, I thought this week’s SmackDown was far better than last week and actually worked in setting up storylines going forward. Kelly Kelly has now defeated both members of Lay-Cool in singles action and surely, that puts her in line for a title shot next? That’s the story that was told here and it was nicely done.

As for the match, it wasn’t the most memorable bout but I do enjoy seeing Michelle’s physical nature in the ring and she really grounded-and-pounded Kelly. I suspect, like Maria, Kelly is better served in a role of being pounded on rather than doing offense. She looks great taking a beating.

The highlight of the entire segment for me was Tiffany. Once again, she had such a small role — just standing at ringside and taking a couple of bumps — but she did her job perfectly. Both of her big bumps looked devastating and I don’t know why, but this girl takes the most jaw-dropping bumps on the outside. I wonder if that’s why they keep doing them? She just does them so well. She sells the physicality of it and looks like she’s really taken a beating. The first bump in particular, into the barricade, made me cringe a little — but that’s a testament to how believeable it looked.

Not a bad night for the SmackDown girls and it sets something up for next week and the weeks ahead. A lot has been said about Kelly inching so close to the Women’s Championship but personally, I’m not too fussed. Will she get a title shot? Yes. Do I think Kelly will be the next Women’s Champion? No. I expect this will be a stop gap until Melina is cleared to wrestle. My hunch is that she will be back on SmackDown and drive a wedge between Lay-Cool.

EDIT: As well as Kelly, it was also a big night for Straight Edge Society Diva, Serena who got a big segment with CM Punk and Kane. Watch below:

For those who haven’t been following this storyline, Kane thinks Punk is behind an attack on The Undertaker which has left him in a ‘vegetative state’. Anyway, for the past few weeks, Kane has been jonesing to get his hands on Punk but when he does this week, Serena comes out with proof that he couldn’t have attacked ‘Taker.

We see footage of Serena in a bar on the night of the attack as Punk, Luke Gallows and the mystery third member [Joey Mercury] walk in. Punk is pissed and leaves, Serena runs after him.

Anyhoo, after the footage airs, exonerating Punk, Kane leaves the ring but the Straight Edge Savior isn’t happy with Serena for exposing her relapse. “Have you any idea what you’ve done?” he screams, leaving Serena in the ring.

It will be interesting to see where they go from here — will Serena be kicked out of the Straight Edge Society? Personally, the women’s division could use her so I’d be all for it. I could definitely see her as a babyface that is bullied by Lay-Cool for not having a ‘girly’ look. And if Melina returns to SmackDown as I expect she will, the prospect of Serena, Melina and Lay-Cool will help SmackDown regain its title as the best weekly women’s wrestling on TV. The thought is salivating…