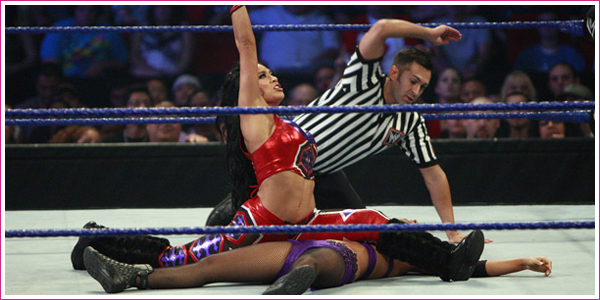 In the week since last week’s SmackDown and today’s, the women’s division for the blue brand has become almost unrecognisable. There’s a new Women’s Champion in Michelle McCool and the brand took a severe hit, when it lost solid workers in Gail Kim and Alicia Fox. The aftermath of the trade on Monday night, hurt because we’re huge fans of Gail and Alicia as well as the way SmackDown was booked in the past couple of months.

But I’m pleased to report, that the trades haven’t affected the quality of the show as this week business continued to boom for the Friday night show, showing no signs of mourning for the dearly departed Divas. Watch below as Melina teams up with an unlikely partner, Maria to take on the now heel again, Layla and McCool:

While I enjoyed this week’s show, the Divas action had a different feel to it this week — not necessarily a bad thing, but it did feel like a ‘new phase’ without two of my favourite Divas, Gail and Alicia. The result of their trade to Raw means that Maria returns to the ring in a wrestling role, after some time away teaming with Melina. I have to admit, after seeing Melina come out with Gail so often, I kinda felt a pang when I saw Melina and Maria come out together. Not to mention, there seems to be an awkwardness between the two. I don’t know, even though they are both faces, they just seem like such an unlikely partnership and it’s almost as if there’s some tension between them. Not trying to create ~backstage gossip~ but they certainly didn’t have the touchy feely, fun smiley chemistry of Gail and Melina.

Anyhoo, starting with the looks: As a 6th grade science teacher, I’m sure Michelle knew a thing or two about conducting electricity, so I’m sure she’ll understand why I suggest she looked like she was half way through wrapping herself up in foil to go find lightning. The top and the shorts would have been fine, but the silver on the arms and over the boots was a little much for me. Meanwhile, it looks like Layla has finally answered her critics as she goes back to her gorgeous straightened hair! And finally looking every bit the goddess that she is, Layla ditched some of the ugly Bella Twins-esque outfits that she’s been wrestling in and wore something a little more sexy. I wasn’t too sure about it at first when she walked out, but by the end of the match, I was sold on the cute lavender outfit — the tights underneath the shorts keep things a little classy too. As for Melina, she sports the same attire as The Bash and looks great while Maria, well looks like Maria. Notice the single white glove, an homage to Michael Jackson perhaps?

Layla starts things off showing some attitude, attacking a distracted Melina. Layla has a great ring presence, I like the way she trashtalks her opponent as she goes, showing her temperament. It isn’t long before the now former Women’s Champ bites back though, with a kick straight to the face. Melina tags out to Maria, and when I first watched the match, I cringed…

But for all intents and purposes, Maria certainly surprised me, more than handling her own against Layla and seemingly toned down the ‘spastic movement’ that we’ve seen in the ring in the past. Maria hits a really good spot, using her leg to do a monkey flip, a unique take that looked really good. Things start to go downhill for Maria as Layla starts gaining momentum kicking Maria’s leg out from underneath her, which puts Maria in a compromising position.

Layla tags out to Michelle, who has brought out the best in Maria in the past, the new Women’s Champion dominates Maria, working on that leg Layla just hurt. After a brief tag out to Layla, Michelle re-enters and continues to work over the leg; this is becoming almost a signature for Michelle, find a weak spot and exploit it throughout the match, giving that emphasis of a ‘story’ being told. Maria manages to counter Michelle’s ankle lock, which sends Michelle into a flip that’s executed very nicely by the champion. Maria follows up with a less than stellar heel kick before giving Melina the hot tag.

Melina’s hot tag sees a barrage of her signature moves including the ‘Ma-Trish’ into the overhead kick on Layla and she sends Michelle flying off the apron. In the ring, Layla manages to get back into it and seemingly goes for her ‘Layout’ but Melina reverses into her split leg-drop for the win.

A really good match, once again from the SmackDown brand despite losing some great talent. They seem to now be working with what they’ve got and making the best of it. Maria, who I am usually less than impressed with in the ring, showed some development here and was used in a manner that kind of kept her limited which means less botches too. Good stuff, I was dreading this week’s SmackDown and while it did feel different, the work was there.