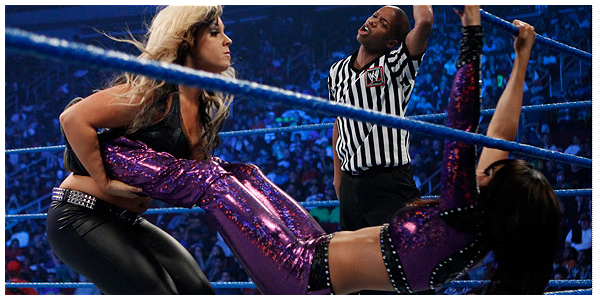 It’s been brought to my attention that since the Elimination Chamber, SmackDown doesn’t really have a clear cut storyline for their Divas. Other than the Lay-Cool teased tension, nothing has happened for anyone unless they’re named Layla or Michelle McCool. Other Divas have of course had supporting roles in this storyline and this week, it was NXT season three winner, Kaitlyn, who got a chance to take a backseat to Lay-Cool. Kaitlyn has rarely been seen since winning NXT3 a few months ago so it will be interesting to see how far she’s come, if at all. Lets take a look at how it all plays out this week.

Lay-Cool are out first. Michelle seems to have gotten a new weave and Layla’s outfit doesn’t look like an eyesore this week. Michelle, however, is not at her fashion best and I just can’t get behind the LBD/camel-colored boot combo. We are off and running, right? This is and always will be the Real Wrestling Fan’s guide to SmackDown. Kaitlyn out second with her own theme song and video. The song is horrendous but her new ring gear compliments her curves nicely; still hating on her hair. She gets a thunderous pop being the hometown gal and all, and it’s just nice to see her on SmackDown for a change.

The bell rings and both Divas lock up. Layla forces Kaitlyn back against the ropes but her advantage is very short-lived because the former fitness model uses her power to shove Layla back across the ring. Layla reaches for the ropes to help herself up, and Kaitlyn walks towards her. Layla doesn’t want any part of the NXT season three winner but Kaitlyn grabs Layla by the legs and viciously yanks her off the ropes. Layla crashes into the mat and Michelle screams on her BFF’s behalf. Layla begins crying about her tailbone hurting and Michelle tries to comfort her. Kaitlyn rips the British-born beauty from Michelle and carelessly tosses her across the ring.

That brings Michelle to the apron. Kaitlyn tries to pull her into the ring but it’s unsuccessful, so she turns around to go back to Layla after disposing of Michelle. Layla is waiting and nails Kaitlyn with a kick. Two seconds later Layla grabs Kaitlyn and nails her with her finisher, and she gets a quick pin. Lay-Cool’s theme song hits and Michelle makes her way into the ring. Lay-Cool embrace and celebrate Layla’s victory, then they turn their attention to Kaitlyn.

Kaitlyn is dragged to the corner and positioned precariously between the steel ring post. Layla jumps to the outside to hold a struggling Kaitlyn. Michelle taunts the helpless rookie for a second before backing up and getting set. She runs towards Kaitlyn and slams her in the back of the head. Kaitlyn’s face bounces off the turnbuckle and she’s left to whither around on the mat in pain. Lay-Cool celebrate their dominance and the message they’ve sent is pretty loud and clear; they’re back to being flawless and there’s nothing any of us can do about it.

What can I really say this week that I haven’t said in previous weeks? SmackDown was its usual self. Lay-Cool once again took center stage. And once again, random Diva number five looked okay in the ring for the few minutes she was given. I try and build up SmackDown as much as I can. In recent weeks we have honestly gotten some beautiful matches (main event matches, no less) from these girls. But there is never any follow-up. Kelly Kelly just had Vickie Guerrero fired. Where is she now? I wasn’t aware that because she won her second main event match with Edge that Kelly couldn’t be on SmackDown on a continuous basis. I don’t want to get into a rant because I realize that this is the slow point of the year for the Divas, but I can only hope and pray that come Monday night something will get set up for Wrestlemania. They have a golden opportunity to set-up a match that will feature Trish Stratus and Lay-Cool and I sincerely hope they do.

As far as tonight goes, everything was just okay. The match was way to short and honestly there’s really nothing for me to judge. Neither Kaitlyn nor Layla showed us much tonight and it’s a shame because as someone who covered NXT3 from top to bottom, start to finish, I would like to see how she’s improved in the ring, if at all. It’s a shame that Kaitlyn hasn’t been featured more on the program, but none of the winners with the exception of Wade Barrett, seem to fare well once they make the main roster. To be fair, Barrett’s not really did that well either but this is a Diva site and personally we don’t care so much about that.

Kaitlyn received the typical beatdown treatment after the match as well. The way Lay-Cool finished her off was pretty impressive. I liked seeing her get her head slammed into the turnbuckle in such a brutal fashion. Michelle McCruel is such a fitting nickname!

It seems pointless for me to even rant about this SmackDown despite the fact I want too. Ranting does no good and I’m not going to bother to try and find a silver lining in this dark cloud. I can’t really say anything else about the show tonight. But what I can say is I hope and pray that if we by chance have any readers in Japan that you’re safe and sound, warm and dry. Japan is a mecca for professional wrestling and we’ve got to remember them in our thoughts and prayers tonight. Tragedy doesn’t just affect one area, it affects all areas. I truly hope and pray that everyone in Japan and across the Pacific are staying strong.