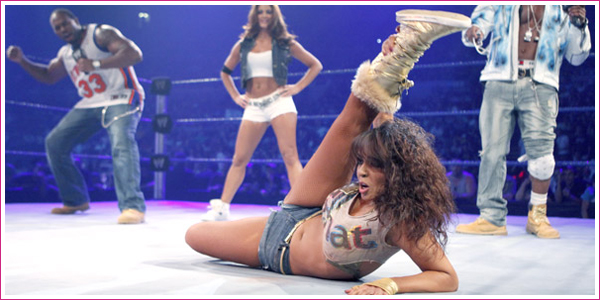 As the Draft finally takes shape, an influx of new Superstars and Divas make their awaited SmackDown arrivals this week. Among is WWE’s resident Nasty Girl, Layla! The Londoner faced off against mainstay, Eve Torres in what Cryme Tyme described as a ‘Brooklyn Breakdown’ dance-off, check it out below:

What’s this? A dance-off that is actually pretty good? WWE’s insistence on putting Divas who can’t actually dance *coughKELLYcough* have ruined past dance contests, but this was a far cry from the dance contests of yore. That said, it’s not exactly my idea of good booking and I’d still rather see a match, but I’ll admit, it was done right.

Coming to SmackDown is a new lease on life for our Layla, she’s finally ditched the black, more modest outfits she was seen in when managing William Regal and is now showing off that bangin’ body of hers. She looked absolutely beautiful and I’m loving the t-shirt, “All That.” The dance-off was smokin’ hot and we got to see some of Layla’s also smokin’ hot bad girl attitude afterwards. I really hope her move to SmackDown will finally put Layla in more of a wrestling role, as JR teased at the end of the video, it can’t be long before we see Layla and Eve square off.

Not exactly an auspicious feud to kick off her stay on SmackDown given the other faces on the brand: Maria, Gail, Melina, but it’ll do for now. It’s time for Layla to step up and I hope she’ll be able to slot into the role of the number-two heel behind Michelle.

All in all, I guess this segment is skippable but if you’re a Layla fan, like us, I’m sure you’ll appreciate her fierceness.