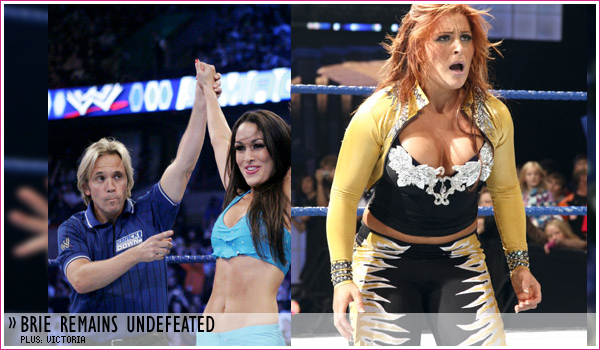 This week on SmackDown: Brie Bella continued her sneaky ways as she scored a victory over Natalya thus remaining undefeated. Meanwhile, Victoria got a big shock from Hornswoggle!

Thoughts & Reactions
An okay week for SmackDown, if a little uninspiring. I was expecting (and looking forward to) the aftermath of Maryse costing Michelle the Champion vs Champion match last week on the All Star Kick-Off, instead these two Divas were nowhere to be seen. Sucks! But I won’t complain too much, because I did enjoy the match between Brie Bella and Natalya. I like both of these Divas and they both seem to have a lot of potential in the WWE.

This match started off shaky and got better as it went on, Brie looked green at the start with an awkward crossbody from the middle turnbuckle. But things did pick up and reminded me how much I missed seeing Natalya in the ring! When I read the spoilers for this week’s show, I thought what on earth are WWE doing by burying Natalya like this? Well it wasn’t like so, I think they did a good job of having Natalya look confused and Brie getting an upset because of this. I really love seeing Natalya in the ring and she seems to bring out the best of lesser workers and I felt this was another example, the match got better and proved to be entertaining at the end. I know many of you don’t like me comparing Natalya to Beth Phoenix, but I think they have similar backgrounds and similar looks. What I love about Natalya is that she really shows fire and intensity in the ring and this was on display on SmackDown, slapping Brie around and taunting her. That’s something we don’t see from Raw’s Beth. Natalya really uses the ring well and knows what she’s doing moreso than most of the Divas in WWE. I’ve said it before and I’ll say it again, I think she’s the best women’s wrestler on the roster. That clothesline looked sick! Anyone who can perfect the simplest of moves and make them look so effective is on the right track to becoming a future star.

As for the end with Victoria and Hornswoggle, very entertaining and funny. Plus it threw off the ‘big reveal’, I’m not sure when they’re gonna go for the reveal but hopefully soon! I loved that little wink from Brie (or Nicole?) when she came out of the other side of the ring, kinda cocky! Anyway, a decent outing for the Divas though not completely enthralling.

Brie Bella: This was the weakest performance by Brie so far, but passable.