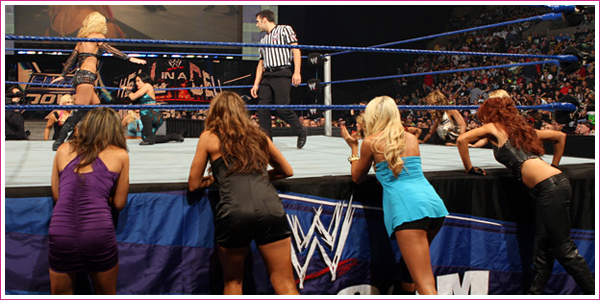 Last time on SmackDown Superstars: The dynamic duo of Michelle and Layla defeated the not-so-dynamic team of Maria and Melina. Maria played rag doll and Melina wasn’t there to save her from interference from Michelle, so the loss only served to push the former friends ever further apart.

This week: Are we going to see a blow-up anytime soon, or will this simmer longer? Are we in for more skits, or will this 10th Anniversary special be more wrestling-based, with the drama reserved for a less prestigious event?

Justin Roberts tell us that this is a Lumberjack match for the Women’s Championship. We are then graced by the presence of Divas from all three brands (All entering to Eve’s music.. I guess because it’s the most generic?), and it’s easy to figure out who’s the challenger by eliminating each Diva that walks down the ramp in her awkward street clothes. Next through the curtains is Melina, and as she makes her way to the ring they cut to a quick shot of Maria. I suppose that will suffice for this week’s storyline advancement? I absolutely loved Natalya‘s reaction to Melina’s entrance, like she was appalled. Kinda cute. Michelle is the last one out.

They start with a tie-up, and Michelle quickly uses her knee brace to take Melina down, planting it into her gut. She attempts a pin, but no luck. She pulls Melina to her feet, pummeling her into the ropes and then dragging her back to the middle by her hair. A shot to the spine later, she attempts to whip Melina into the ropes, but she reverses it, stopping her momentum and nailing Michelle in the face. She hoists herself onto the ropes and perform her patented leg attack, choking Michelle. She attempts to finish it off with a chop to the head, but Michelle pushes her up and over the ropes. Melina lands on the apron, fighting Michelle through the ropes.

Michelle reaches for a jab but Melina splits–literally–by landing in a split on the apron and then nailing her with a shot to the stomach. Michelle responds with a dropkick, sending Melina out into the Lumberjack’s domain. Thankfully, she landed on the “good girl” side, because all they want to do is help her to her feet. Michelle sees this and brings Melina into the ring herself. Michelle continues with her attack, kicking Melina and pounding her face into the mat. A few uppercuts, and Michelle attempts another whip, but Melina reverses it again, using this momentum to go on offense.

A few strikes later, she plants Michelle with a flapjack, going for the pin. The ref counts to two, and meanwhile I wonder how absurd it would be for a Diva to win the Women’s Championship with a flapjack. She gets the champ to her feet, but Michelle kicks her, whipping her into the ropes. On the return, Melina meets her with a kick of her own, then striking her in the head and dropping her to the mat. She goes for the ropes again, but she overestimated the kindness of strangers, venturing by the “bad girl” side. And sure enough, Jillian grabs her leg, distracting her.

This seems t have set Melina off more than a simple leg tug should have, and she climbs out onto the apron, diving into the heel Divas. This initiates Diva pandemonium, with girls in short dresses and high heels awkwardly trying to fight each other without giving the 5-year-olds in the front row and eyeful. Amongst the mess she created, Melina tries to climb back into the ring, but Rosa gets some licks in before Michelle pulls her inside. They battle towards one side of the ring, as some of the Lumberjacks spilled into a corner of the ring. Michelle whips Melina into the far turnbuckle and the referee works to get rid of the invaders.

As Michelle runs toward Melina in the corner, she is met with the bottom of her boots, and Melina climbs the turnbuckle, readying her an attack. However, out of nowhere comes Beth Phoenix, who grabs Melina by the leg and crotches her on the top rope. Melina wilts forward, and Michelle takes advantage of this fortuitous position, easily latching her into the Faithbreaker and nailing it. She gets the pin and the win. The camera zooms in on Beth staring rather intensely at Michelle, and I can’t help but wonder if that actually means something. But I’m going to stick on the side of caution and say it doesn’t.

I’m pretty sure this match was just an excuse to fit as many Divas into the Anniversary show as humanly possible, so what better for that than a Lumberjack match? I’ve never liked them too much–too many moving parts–and this match didn’t do too much to change my mind. It wasn’t terrible by any means, but it just felt like Michelle and Melina were just performing a few moves in between interacting with the Lumberjacks. It’s outrageous that this was dubbed a Women’s Championship match, because it’s clear that there wasn’t enough time or focus for such a match, especially one that we’ve been building towards for months. Why toss it away on a match that’s going to be 60% wrestling, 40% outside interference? I guess they were going for a “big” match for SmackDown’s 10 Anniversary, and didn’t really think it through, just slapping the Women’s Championship logo before the match.

I’m not saying I was hoping for storyline advancement or anything, but if you want to do a fun match and include Divas from all the brands, why not do a fun match that we otherwise wouldn’t see? Why not put the Divas who are separated the rest of the year into matches together? and dear God, WHY put the Women’s Championship on the line in such a throwaway match? I understand they wanted it to have a big feel, but it didn’t feel epic, just shallow..