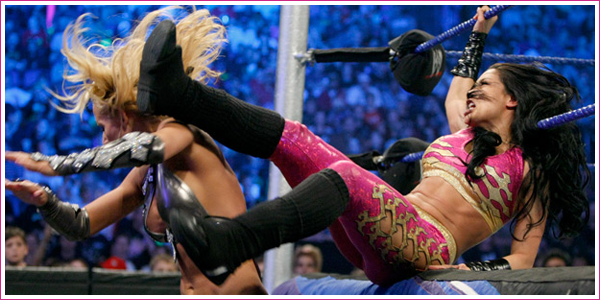 Last time on SmackDown: Michelle and Layla attempt to frame Dolph Ziggler with a camera phone and a timely crutch mishap. Said crutch helps Layla defeat Melina in a match later that night.

This week: Will Maria discover Michelle’s “evidence”, and will Melina feel the brunt of her fury? What about Michelle–is she gonna get off scot-free?

It looks like the WWE is going the extra mile to ~mix it up~, because we have a match to start out our night! That’s right, no lead-in backstage segments! I know, it’s not much, but you gotta cherish the little things in life.. Melina is the first one out, and Michelle follows, noticeably limping on her bum leg. I gotta wonder why she’s wrestling if she’s struggling to even walk down the ramp..

It should be noted that this is a non-title match, so don’t get too excited.. As it begins, Michelle shies away from an actual lock-up, and Melina’s right after her, trying to pull her away from the ropes. They eventually do tie-up, and Michelle knees Melina in the stomach, pummeling her a bit before irish-whipping her. On the return, Melina reverses Michelle’s attack into a flip that lands her on her feet, nailing Michelle with a reverse kick.

Michelle escapes to the outside, and Melina tries to give chase, only to be stopped by the ref. Gotta wonder why the ref doesn’t start the count until Michelle’s outside for a few seconds, not that any Diva match has been resolved by count-out ever.. (Feel free to correct me on that, historians..) Michelle starts to limp around the ring and Melina gets tired of the delay, sliding out of the ring and giving chase. Michelle, of course, hops back into the ring, and when Melina tries to follow, she grabs her by the hair, forcibly dragging her in through the second rope.

She takes Melina to task, beating her down and bashing her head against the mat. Melina, woozy, tries to right herself with the ropes, but Michelle brings her to the middle of the ring, kneeing her in the face. Another kick, this one to the side of the head, drops her to the mat again. She brings her up, stretching her backwards into a Dragon Sleeper. Melina’s bent into the shape I used to meld my Barbies into when I bent all of their joints.. (No, I wasn’t a problem child..)

Melina fights to get free, punching and kicking Michelle. Before she can free herself, Michelle hammers her in the stomach, releasing the hold. She sends her to the corner and begins work, kneeing her repeatedly and choking her with her bad leg. (See, the knee brace is good for something!) As Melina lays prone on the mat, Michelle rubs her hands together like one does after a job well done, running the ropes and looking to baseball slide Melina out of the ring. Melina, however, plays Jerry to Michelle’s Tom, hoisting herself out of the way just in time, letting Michelle go flying out of the ring. Though, I’m not sure what kind of mouse has that type of leg strength..

Michelle holds her bad leg, standing, only to be met in the face with the business side of Melina’s boots. She stands on the apron and takes down Michelle with a modified flying Lou Thesz press, landing on her feet. Showing some fury, she grab’s Michelle by the head and pounds it face-first onto the apron. The poor unacknowledged referee continues his count, unnoticed. Melina eventually tosses Michelle back into the ring, taking her town with a drop-toe hold into the second rope. Letting out a scream that the Hulk would if he sucked on helium, (JR calls it a “Sharapova” and Grisham likens it to a scream in a Hitchcock movie, but I prefer my description.) Melina runs the ropes, nailing Michelle in the back of the neck with her knees. Michelle stumbles to the middle of the ring and, picking up more offensive steam, Melina takes her down with a facebuster. She goes for the pin and gets a two-count, though it looked pretty close.

Melina irish-whips Michelle into the ropes but she hangs on, nailing Melina in the face with an elbow when she charges towards her. She goes for another of her power kicks, a big boot this time, but Melina avoids by bending back in a Matrix move (Hey, Trish ain’t got the copyright on it..), only to turn around and eat boot anyways. Michelle looks to end it, but only gets a two-count for her troubles. Looking frustrated, she hoists Melina up, setting her up for what looks like the Faithbreaker. Melina inches forward, reversing the momentum and with her patented She-Hulk scream, nails the Last Call. Melina gets the 1, 2, 3.

Spoiler reports stated that Melina has a bloody mouth post-match, but unless you looked close, you wouldn’t know. Chalk that up to clever edits or a total desensitizing to blood, but I didn’t notice much. I’m sure it came when Michelle delivered that last boot to the face, resulting in a split lip. It makes me wonder if, in this day and age, any Diva would be able to pull a Lita on a taped show and not send the production team scrambling to cover it. Personally, I’d like to see the girls show a bit of an edge, and if that means *gasp* bleeding, then so be it. I know the WWE’s funky about showing blood on their cable shows, but a busted lip doesn’t exactly make it a Tarantino movie. Don’t be afraid, WWE!

The match, like most Michelle/Melina encounters, was saddled with a small window of time. And, also like usual, the girls made the most of it. Melina seems to be making an art out of using every second of a match to her advantage, with her recent short bouts telling as much story as any full-length Superstar match. Michelle obviously has a hand in this too, as her heel antics and kicks are the yin to Melina’s yang. Quick reverses and cat-and-mouse games seem to be the theme in Melina and Michelle’s bouts, and they help keep the feud fresh. People may be complaining that this feud is dragging on past it’s sell-by date, but I’m not complaining. They’re keeping the feud as entertaining as their first encounter, as evidenced by this match. You show me another Diva feud that didn’t get stale after a few months.

These two have excellent chemistry together, and it would be a shame to ignore that and move on just for the sake of appeasing ADD-infused fans. That’s not to insult those who aren’t into this feud, because you have a valid point too–we should be able to give the spotlight to other girls–but what have we seen in the past few weeks? Eve and Natalya took over the Divas action two weeks ago, Layla’s had her shot at singles matches, and Maria has a whole storyline revolving around her. Correct me if I’m wrong, but is not nearly every Diva on SmackDown getting a time to shine? What then, is the problem with Melina and Michelle still having kick-ass matches together?

Later in the show, we have ourselves a backstage segment. (Ah, WWE reversed the order!) Melina is walking backstage, stilling glowing after her victory. She heads into the Divas locker room, only to be met with a frightening sight:


No, not a naked Teddy Long.. Covering the walls of the entire room are the results of Michelle’s scheming last week–photos are plastered everywhere. Deciding that Maria cannot see this, she frantically removes them, working fast. Maria appears, looking at one of the photos, and Melina apologizes (For what?), hugging her. Maria asks her why she didn’t just come to her and talk to her about her doubts with Dolph. (Er, hello, what was she doing for the past MONTH?) She accuses Melina of taking the photos and trying to embarrass her, which Melina denies. Maria tells her that she’s done with this and done with her.

Somehow I doubt that she’s done with any of this (Though I wouldn’t object!), but I wonder where this will go from here. Surely, this points toward a Maria/Melina feud, but would Maria be heel? Would we have to make those distinctions? What about Michelle? I guess this will be settled in a few more months of backstage segments.. I can’t say I’m looking forward to more melodramatic segments, but if this leads to some interesting matches, it will at least be partially worth it. If it keeps going at this pace, though, it looks like we may be in for a long haul..