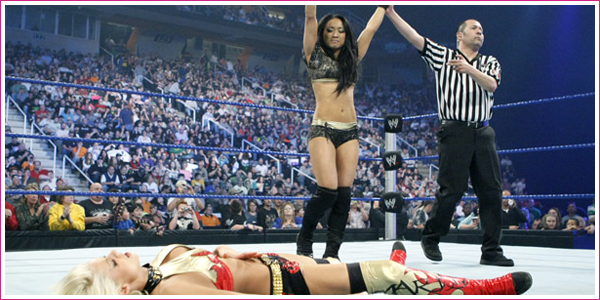 In her final SmackDown match before heading over to Raw, the Divas Champion Maryse faced off against a woman who knows Raw all too well, Gail Kim in what is potentially a blow-off match to their recent feud. Check it out below:

So it looks like Maryse’s being drafted to Raw puts a pin into the feud that was being planned over on SmackDown between the Divas Champ and the returning Gail Kim. I’m guessing this may be the blow-off match as Gail went over the outgoing champion, rather than giving Maryse a win. I think that’s a fair move. The writers of SmackDown need to keep their current roster strong and it sucks for Maryse because she is the Champ but she’s moving to Raw, so it’s only fair she jobs on her way out.

The match, I have to say, didn’t grab my attention in the same way as Michelle vs Gail last week. I didn’t really feel the same chemistry, it just didn’t work for me. That said, it wasn’t a bad match but it wasn’t the best. So perhaps it’s for the best that we didn’t get a full-on feud between these two? Because judging from this, the pay-off match wouldn’t be great. I’m not saying it was awful, but it was passable at best. There were some good spots i.e. Maryse throwing Gail out of the ring. That’s the second week in a row that Gail has taken a big bump on the outside. I wonder if she’s not working in those spots herself to get back some of that creative control she had with her matches in TNA. Maryse’s backbreaker was great as was Gail’s diving neckbreaker from the top rope. The end however, was where things went a little downhill perhaps due to miscommunication. The diving crossbody nor Gail’s double-legged jawbreaker were hit with the same precision as we’ve seen in the past.

Anyway, Gail picks up a huge win over the Divas Champion which puts her in good steed for the incoming Women’s Champion, Melina when she makes her SmackDown return (I’m assuming next week). With Gail getting a big victory this week and continuing to be put over as the top face, I think there’s a 50-50 chance that Melina may come in as a heel next week. We’ll see what happens!