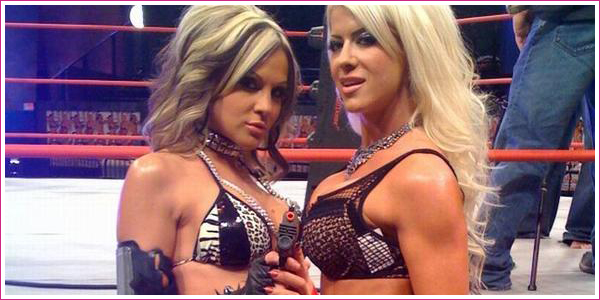 This month, a select few of the TNA Knockouts (Velvet Sky, Angelina Love, So Cal Val, and Lauren) will be gracing the newest issue of Muscle & Fitness Magazine.  Despite the still tender departure of Angelina Love, the magazine will feature the Beautiful People in all of their glory.  So, if you can get past the sore sense of nostalgia, here is some footage from the shoot:

With now a Playboy spread and a Muscle & Fitness feature under their belts in a matter of a few months, the TNA Knockouts seem to be following the WWE Divas in their footsteps.  Despite what they say, it’s almost crude not to realize the parallels.  In a confident attempt to put over the shoot, Velvet Sky chimes in with a rather snide remark (in good Velvet fashion, as always).  From what I’ve seen, the Knockouts’ version looks somewhat promising, but a “hotter piece of work” than the Michelle McCool, Eve, and Maryse Muscle & Fitness photoshoot that premiered earlier this year?  Hmm… not so sure about that just yet.  I suppose, we’ll just have to wait and see!