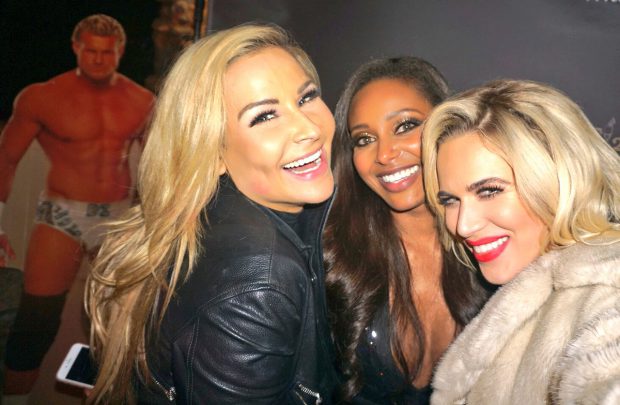 It was the first week of 2017 and our favorite wrestling stars rang in the New
Year with friends and family:

Don't tell my mom that I wasn't wearing my knee brace! #NewYearsEve @emmalution Thanks @davidalan for the sick suit! Thanks @rudybbt & @beachbumli for the sick tan!

This New Years! The sweetest new year kiss of all time and the most memorable ? I love you @littleprincejace

While others announced their New Year’s Resolution:

"I found I was more confident when I stopped trying to be someone else's definition of beautiful and started being my own. " #2017??

I experienced a lot of uncomfortability in 2016. A lot of things that I have not experienced before both in my personal & professional life. A lot of uncomfortable moments, a lot of uncomfortable feelings, & a whole lot of uncertainty! Going into 2017 yesterday I told myself that I wanted to get rid of the uncomfortability in my life. I wanted to find comfort this year after the craziness of this last. But today through scripture & the word I realized that it's in moments of uncomfort that God can begin to transform your life. The moment I allow myself to NOT know everything, when I finally allow myself to NOT be the savior in my own life – then that is when I let Him in to take control of my life & take those things from me. In those stretching moments of uncomfortability it builds each of us to be the person we asked Him to make us be. Though at times it's hard to see it in the moment. ————— But no one enjoys feeling uncomfortable, right? The moment you accept that things may be a little uncomfortable is the moment that God can start to work in your life. Don't push back, don't say that you can do it yourself or on your own…I know I am guilty of that myself. Growth comes in uncomfortability. I got strength from 2016 that I would have never gotten if I didn't feel uncomfortable. ————— For 2017 we need to feel uncomfortable & inconvenienced. If your family is broken & it's uncomfortable to have those certain conversations with them…have them! We walk down the road & walk past homeless people, people who are struggling, walk past people who are ostracized because it's uncomfortable & hey, "I have my own story & I worked hard to get where I am so why should I?" No. Be uncomfortable. In 2017 let's embrace uncomfortability because it's that uncomfortable feeling that will change society. Some of you don't think that you can have as big of an impact so that's why you don't do it. Trust me, myself included. But that's not true! Living in uncomfortability will alter the course of not only just your 2017 but your life. #praise #worship #hillsong #gospel #ministry #newyear #faith

Last year I said I had untapped potential…then I became a female wrestler. This year I say I have even more potential…so let's see. ??

Emma is waiting to make her televised return as much as her fans are:

I can already hear the fans chanting my name on #RAW… #Emmalina pic.twitter.com/AF9PIDYatf

The TNA Knockouts were all set for their return to the Impact Zone:

Peyton Royce celebrated her eight year anniversary in the ring:

Happy anniversary to me! ? celebrating 8 years with my first love, Pro Wrestling! You've filled my heart & for that I am forever thankful ? pic.twitter.com/vtob5Yg7rG

which also happened to fall on the same day as her friendship anniversary with Iconic partner Billie Kay:

One of WWE’s newest signee Kimber Lee reflected on her journey in making it to NXT:

Life is incredible. Especially when you continue to push forward even when you feel like quitting. Here's to the #NXT chapter ? pic.twitter.com/26Met5OQZF

Deonna Purrazzo continues to be the hottest free agent in wrestling:

And we close this week with a clip of Sasha Banks going ‘Bollywood’: