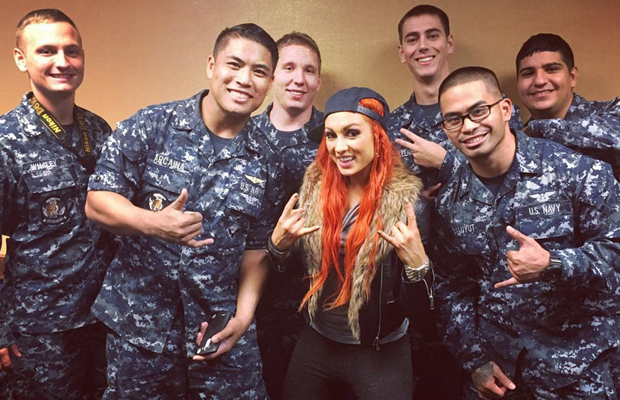 Beautiful Baby on board! As fans know, Angelina Love is expecting her first child with Davey Richards in 25 weeks! The former Knockouts Champion finally shared her baby bump with the world in a stunning new Instagram photo:

Going to prom at my school tomorrow with the hubby! This is the only dress that fits lol!! #25weeks #babydavey #richardsfamily

Speaking of pregnant ladies of wrestling, Rosa Mendes shares another photo of her pregnancy progress with the world. The Total Divas star is now 30 weeks pregnant. Looks like we should be expecting her beautiful baby girl any day now!

30 weeks everyone!!! Jordan will be here so soon!!!! So thankful to have such a supportive man in my life. I love you @bobbyschubenski so much. #road2motherhood

Chyna continues to pay visits to the stars of WWE. The Ninth Wonder of the World caught up with WWE Hall of Famer Booker T this past weekend. Hey Booker, use some of your HOF power and get Chyna in there!

Renee Young is usually pretty calm, cool and collected during her interviews but we’ve got a feeling she was geeking out during this one. The WWE Announcer interviewed HAN FREAKING SOLO! That’s right, Harrison Ford sat down with Young to discuss the latest Star Wars film that debuts on December 18th:

As we’ve seen Cameron has been all over the place lately. From killing it in the ring to launching new anti-bullying campaigns and now she’s doing Game of Thrones inspired photoshoots! Can’t wait to see the final product of this one!

When secretly think you're a part of @gameofthrones but then you realize you're just out in the woods taking pictures for a photo shoot lol ! ? #gameofthrones

Team B.A.D. was on media duty for Raw in Long Island this Monday. Sasha Banks, Naomi and Tamina Snuka posed with a fellow guest on one of their media appearances, an owl! One of WWE’s marketing team members shared a photo of this momentous occasion:

While this may not be a recent photo, Natalya shared a shot of her, Tyson Kidd and Cesaro arriving at an arena when her boys were the WWE Tag Team Champions earlier this year. Along with the photo Nattie shared a heartwarming story from her injured husband Tyson, who was watching an old match against Los Matadores from this year. She really captures how much this business means to them in the story:

TJ watched an old match of his today from Germany last April. April 18, Nuremberg to be exact. He found it on YouTube. The crowd was crazy that night for New Day V Cesaro & Kidd v The Matadors. I was on the outside managing them and the people were on their feet. It was exciting to be a part of it. At one point they were singing Cesaro's name. The atmosphere was surreal. The people were on fire for the whole match. TJ said to me today there's just nothing like that feeling of capturing the audience and being in the ring with your best friends. You can't describe it unless you've experienced it. TJ has watched that match over and over again today It makes him smile which is great. TJ's childhood dream was to be a wrestler. He had his first match at 15 and wrestling is the only thing he's ever wanted to do. Not everyone can say that they got the chance to live their dreams. He is truly blessed. If you are one of the lucky ones to touch your dreams … hold on to it:) #grateful

Eden posed for a photo with her real life husband Stardust to promote some of his merchandise available this holiday season, including a purple mask. Eden is serving some Grinch realness in this shot:

Get some -thing for the King and/or Queen in your life… #PurpleRain ?? mask available @WWEShop #InDemand pic.twitter.com/e2YysG1p8p

Wow, talk about a transformation! Paige shared an old school photo of herself from early wrestling days at age 14:

Haaaaaa. Little throwback to when I was taking some cool "promo shots" for some wrestling merchandise when I was 14

This week WWE filmed their annual Tribute to the Troops special set to air later this month. Becky Lynch snapped a photo with some of America’s camo clad heroes as part of the event:

Great day with the #troops

Becky Lynch wasn’t the only Diva in the house for Tribute to the Troops. The cast of Total Divas was on hand to pay tribute to America’s armed forces. Brie Bella, Eva Marie, Natalya, Alicia Fox, Mandy Rose and Paige posed with Chief James Watkins before the big show:

#TributeToTheTroops with Chief James Watkins and my #TotalDivas girls this morning on base?? #WWE #Navy