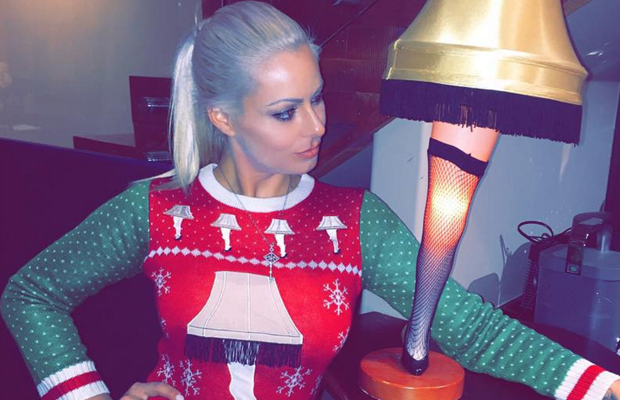 This week, Alicia Fox and Eva Marie paid a visit to some of our troops stationed overseas. Look who else was along for the ride: Vince McMahon! The boss snapped a pic with the Total Divas stars. We think he’d make a pretty great addition to the cast. After all, he certainly brings the drama!

Nikki Bella made history on Monday by winning the 2015 Diva of the Year Slammy. After an incredible year the longest reigning Divas Champion posed for some selfies with the newest addition to her trophy case. Congratulations Nikki!

I won! Thank u #BellaArmy & WWE Universe for voting me as your Diva of the Year! This has been the most incredible.. pic.twitter.com/pdkVQ9xM41

In addition to her fabulous selfies, Nikki posted a photo with the Superstar of the Year, Seth Rollins. There’s no question: 2015 was dominated by these two!

Your Diva and Superstar of the Year! ??? Will be returning stronger than ever! @WWERollins #SlammyAwards pic.twitter.com/pmlnLDrFS7

Charlotte has whole-heartedly embraced her new identity as the “Dirtiest Diva in the Game”, but her pal Becky Lynch gave her a run for her money on Tuesday’s SmackDown after Team B.A.D. gave her an eggnog shower. Leave it to Charlotte to find the bright side!

Santa Claus.. er, Mick Foley and his family made the ultimate gesture of wrestling fandom this week, dressing as each of the Four Horsewomen. Killer shades, Mick!

It seems like just yesterday Trish Stratus announced her pregnancy to the world at the 2013 WWE Hall of Fame ceremony, but one look at her son reminds us that nearly three years have passed since. Here’s little Max checking out the goodies Santa left in his Christmas stocking:

Merry Christmas from our family to yours! Hope everyone has a blessed day with family and friends that is filled with wonder and delight…. and food!! ?? #merrychristmas #MaxStratus

Though Christmas is known as the season of giving, it’s easy to forget to extend our generosity to those who truly need it. Cameron did just that when she volunteered at the Los Angeles Mission yesterday, helping serve Christmas meals to the less fortunate:

Merry Christmas to everyone! Yesterday felt amazing to be able to feed and give back to the less fortunate. Sometimes we don't realize what really matters the most. It's the little things that count.

Nattie‘s got the right idea! Our favorite cat lover shared her recipe for a cozy Christmas Eve: one part kitty, one part Home Alone. Sounds good to us!

Looks like The Miz got his very own “major award”! Former Diva Maryse shared this snap with a replica of that famous A Christmas Story leg lamp. She doesn’t seem too thrilled about it, but hey, at least it matches her sweater! Here’s hoping it doesn’t end up in pieces like the one from the movie:

I guess this is very Americain, for some reason my husband really likes this lamp and wanted to put it in our front window. I said no he said but babe #achristmasstory @mikethemiz

A photo posted by TheRealMaryseOuellet (@therealmaryseouellet) on Dec 24, 2015 at 9:13pm PST

Flashback Friday, anyone? The WWE shared this classic photo from the early days of the McMahon-Helmsley era, when the Billion Dollar Princess Stephanie McMahon and Triple H got comfortable and surveyed the action during the 1999 Christmas edition of Raw. If Stephanie had been that cheery this year, perhaps a certain member of the broadcast team would have been spared a beatdown:

Via @stephaniemcmahon: #TBT the #McMahonHelmsleyEra @WWE 1999 #RAW Christmas Special #HappyHolidays to everyone celebrating this season!