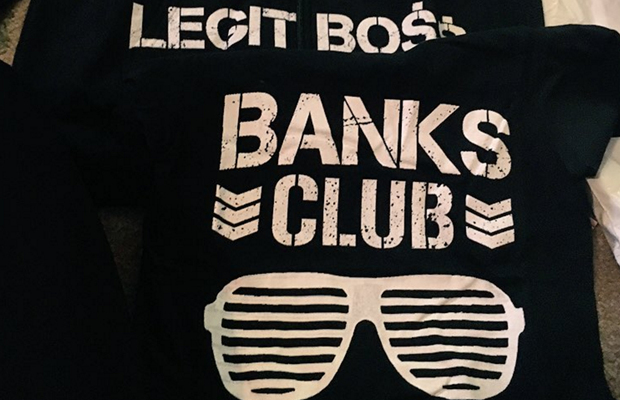 Congratulations are in order for former NXT Diva Shaul Guerrero and NXT Superstar Aiden English! The happy couple was wed this past weekend in what looked to be a gorgeous ceremony. Proud mother of the bride Vickie Guerrero shared a pic of the newlyweds on Instagram:

I'm beyond happy that these two found eachother!

With the Royal Rumble in mere weeks, that means WrestleMania season is right around the corner. Stephanie McMahon and the rest of the McMahon family attended a Dallas Cowboys game this past week in the very site of WrestleMania this year:

Thank U @dallascowboys, @CJonesAnderson & the entire Jones family for inviting us 2day! 90 days until @WrestleMania! pic.twitter.com/8W7jT3m5fT

In one of the most star-studded events of the year for wrestlers, Maryse and The Miz hosted their annual New Year’s Eve party at their home. Among the guests this year were Eden Stiles, Cody Rhodes, Dolph Ziggler, Lita, Natalya, Emma, John Morrison and Zack Ryder. The hostess snapped a pic on the red carpet with a few of the past and present Divas:

A photo posted by TheRealMaryseOuellet (@therealmaryseouellet) on Jan 1, 2016 at 12:18am PST

There was another huge wrestling wedding this past week: Mickie James married Magnus! Whether she’s rocking rhinestone jeans or a wedding gown, Mickie sure looks lovely. Congratulations to the happy couple!

We tied the knot. Thank you to everyone who came to share our night with us and for all the well wishes!

Natalya returned to the ring this past weekend at a WWE Live Event, but before her return, she made a pit stop at a PWG show. Nattie posed for a pic with a longtime friend and one of the people she learned to wrestle with Jack Evans:

I love this guy! Jack Evans was one of the first people I learned to wrestle with 14 years ago. He is one of my all time favorite wrestlers and people… A great friend, too. ?

This is one fit mama! 34 weeks into her pregnancy, Rosa Mendes gave us an update. Looks like everything is going great!

34 weeks in, and still feeling awesome. This bun in the oven work out @hardnockssouth has given me has helped my back pain, my mind, and it's so good for Jordan's health. I read that staying active helps baby's brain develop too. There are so many great benefits, but the most important thing is to consult with a specialist. My doctor deals with pregnant athletes and I was told not to squat. My pregnancy has been perfect, but it was a risk that I wasn't willing to take. Everyone's body is different, my workout is designed for me. Make sure you have a workout that is made for you, listen to your body, keep your heart rate under 140. Baby's health and your health is priority!! #road2motherhood #fitmoms #healthychoices

Talk about slaying! Paul Heyman treated us to a preview of an all new photoshoot with Summer Rae. The blond bombshell looks stunning in this new shoot for Heyman Hustle:

On Raw, we saw Divas Champion Charlotte turned on her friend Becky Lynch after Lynch defeated Charlotte in a hard fought battle. Lynch went to Twitter to let out her emotions after the betrayal:

As we mentioned earlier, Natalya was back on the road with WWE this week. The Total Divas star shared a photo with another backstage guest: former WWE SuperStar Funaki!

My little ray of sunshine in San Antonio? @shofufu824 pic.twitter.com/GSoNI1HNSm

Although she may be sidelined with an injury, Nikki Bella has been extremely active on social media. You voted her as the Diva of the Year in the 2015 Diva Dirt Fan Awards and she took to Twitter to express her gratitude:

Thank u #BellaArmy 4 continuing 2 support me! Diva of the Year 4 the #DivaDirtFanAwards has me smiling huge! THANK U! So honored! @divadirt

& Jordan at @divadirt your video gave me chills! I will cherish this video forever! Thank u! 2015 was just amazing! https://t.co/z5mgUsChHO

On this week’s episode of WWE Breaking Ground, fans got an up close look at Dana Brooke‘s efforts to recover from a sidelining injury. The “Total Diva” thanked her fans on Twitter for their concern:

This week was filled with rumors of The Bullet Club being signed by WWE. Finn Balor has been teasing fans with posts all week about the rumor, and now Sasha Banks has gotten in on the fun. Banks tweeted a photo of her custom Bullet Club-inspired gear to Shinsuke Nakamura to stir the pot a little more:

Looks like WWE.com has another new Divas photoshoot on the way! Natalya gave us an early preview with this photo:

Behind the scenes | San Antonio ??? pic.twitter.com/efQ5yaVbVs

Nikki and Brie Bella were guest on Thursday’s Good Morning America with WWE Champion Roman Reigns. GMA posted a video of the Total Divas stars making their entrance in front of an excited audience: