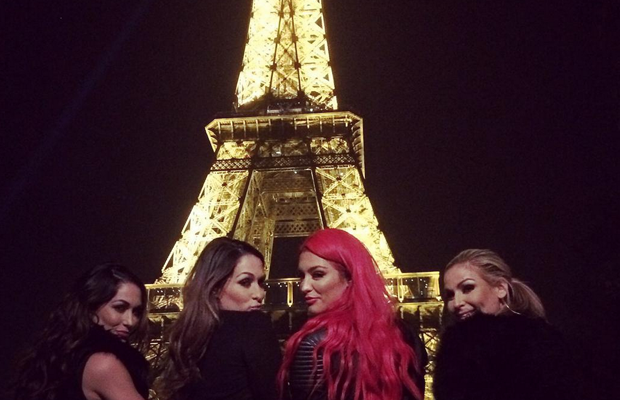 News broke this weekend of Lana and Rusev‘s real life engagement. Prior to the news being broken on WWE.com, Lana kept kayfabe intact by keeping coy with an Instagram post:

I am lucky, I am blessed but more anything I grateful.

The only thing missing here is a choreographed dance number! It’s the Nitro Girls! Well, some of them! A few members of the former trio were reunited for an appearance at an ROW television taping this past week. Among the lovely ladies was former Diva Sharmell. Great to see all of the ladies looking so fabulous!

Why did Becky Lynch post a random photo of a bunch of pumpkins? Oh wait, she’s in there too! Becky’s fantastic orange hair blends in perfectly in this photo while her and Charlotte visited a pumpkin patch in St. Louis this past weekend:

I'm a chameleon . Just hanging with my pump-kin. See you in #wwestlouis !

The Divas were off in Paris filming an upcoming episode of Total Divas this past weekend. While there, the ladies couldn’t resist stopping by the infamous Moulin Rouge during their visit. Nikki Bella captured the moment, looking stunning in a red dress that matched the decor to a T:

As we all know by now, Bayley defeated Sasha Banks in an incredible Iron Man match at NXT TakeOver: RESPECT. The last time these ladies had met, Bayley took the NXT Women’s Championship from Banks. This time, it looks like she made off with another one of her opponent’s accessories:

After an invasion of women from SHIMMER at this past week’s NXT tapings, SHIMMER alumni Paige returned the favor, meeting up with her old friends when their paths crossed in Illinois:

This past weekend, Athena made her official NXT debut at a live event. WWE’s newest signee tweeted her thanks for all of the positive support she received after her first match, promising not to disappoint her fans who know what she’s capable of:

Thank you everyone for the amazing feedback on my debut @wwenxt !! Its been truly amazing! I won't disappoint #NxtStrong #MakeArtOutOfWar

Although she’s been absent from TV the last couple of months, Cameron has been more determined than ever to be a top Diva. This week, she posted a photo of the WWE Performance Center, where has she returned to train:

I owe it to my fans to perfect my craft and deliver above & beyond anyones expectations.The journey starts here… pic.twitter.com/2o1g5bFZja

Looks like a Halloween themed WWE Divas shoot is headed our way! Divas Champion Charlotte uploaded a picture on the set of something very spooky looking:

It’s another shot of some of our favorite Divas in Paris! Brie Bella uploaded a photo with her sister Nikki, Eva Marie and Natalya enjoying one of the world’s most famous structures, the Eiffel Tower:

Look who was in the crowd at Raw this week! With her popular restaurant The Squared Circle just around the corner in Chicago, former Diva Victoria sat front row at the hottest ticket in town. Too bad we didn’t see her get a little crazy on the current Divas, but you never know what the future holds!

Thank you Chicago for an amazing night @wwe #RAW . Time to head back to LA. My little Lovey misses me!

Well, it’s official. Charlotte finally customized her Divas Championship with the “Charlotte” name plate, adding some overdue Flair to it:

Officially added some Flair to the title ???

MORTAL KOMBAT!!!! Mimicking the pre-fight screen from the popular video game, Team B.A.D. faced off with The New Day in their ongoing social media war. WWE really needs to take notice and put these two teams into one ultimate stable: