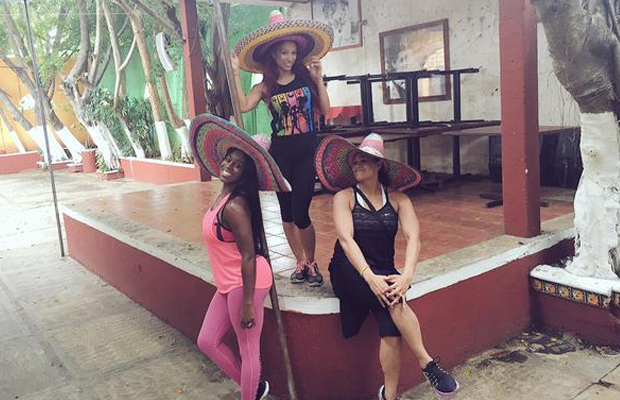 This past weekend, WWE toured throughout Mexico, and the Divas and Superstars had an incredible time interacting with their Mexican fans. Paige uploaded a video to Twitter showing one of the incredible arenas she performed in during the tour:

While Paige was enjoying the huge arena, Team B.A.D. was getting in touch with Mexican culture. Sasha Banks shared a photo with her teammates Naomi and Tamina Snuka rocking some giant sombrereros. We think it complements her stunner shades perfectly:

Lana may be sidelined with an injury, but the Ravishing Russian is certainly keeping busy. She shared a picture in front of that now-infamous full length mirror with a movie script, pilot, book script and a potential comic book deal laid out. All of this on top of planning a wedding – how does she do it?!

luck is when preparation meets opportunities. I never sleep & I never stop. Nothing will keep me down. So I started writing. My book , pilot, movie script and looking to collaborate with a comic book artist & writers. Lets make magic come to life!

Alicia Fox posted some photos with a familiar face, former developmental Diva and her sister Christina Crawford. The stunning sisters were seen having a photoshoot done on the beach. Can’t wait to see the final product!

Last week, the WWE released Devin Taylor. This week, she visited Nashville to catch up with Lana, who she roomed with during their days in NXT. It’s Great to see Devin not letting her release stop her from having fun:

Are we sure she’s pregnant? A gorgeous Rosa Mendes shared her tiny baby bump online and announced she’s six months pregnant! Only a few more months until we get to meet Mini Mendes!

Saraya Knight celebrated her birthday in a big way this week. As if she wasn’t wrestling royalty already, she was joined by WWE Hall of Famer Scott Hall in her celebration:

Hanging with this crazy loon! Had a blast and he spoilt me with a fine feast :) till the next time my friend @SCOTTHALLNWO

Looks like Sasha and Naomi are doing it big! Team B.A.D. was chosen to promote the SmackDown tapings in Austin, Texas this week by doing media on several different television programs. Doing it like a boss!

No one is more exciting and energetic in the ring than Bayley, and this video is proof of that. The Women’s Champion emulated one of wrestling’s biggest names, Stone Cold Steve Austin, by nailing a Stunner on Alexa Bliss at a live event this week:

No better time to share my excitement for this opening segment on #RAW! #StoneCold!!!! #NXTOrlando

It’s no secret that most fans are disappointed with the mediocre job 2K Games did with the Divas in the latest installment of WWE video games, but now you can add WWE talent to that list. Renee Young recently mocked a photo of her unrealistic likeness in the game on Twitter. 2K really needs to step it up!

As is tradition in the Flair family, a Rolex is given after a monumental match-up. Fittingly, Ric Flair presented his daughter Charlotte with one this week to commemorate her first Divas Championship reign:

Family Tradition: When Shawn Michaels wrestled my Dad at WrestleMania 24 he surprised him after with a matching Rolex….. It was his "Retirement" match & Hall of Fame Induction weekend. My Dad says this match was a highlight & one of the most special moments in his career…. HBK said he grew up idolizing him…. Last night, I was given a matching one ?? to carry on the tradition. By no means is my career ending anytime soon but to carry on the tradition in our family for my first WWE Divas Championship!

AJ LEE SIGHTING ALERT! Dexter actress Aimee Garcia posted a photo with the former Divas Champion at a Cubs game this week. AJ looked great! The Cubs? Not so much: