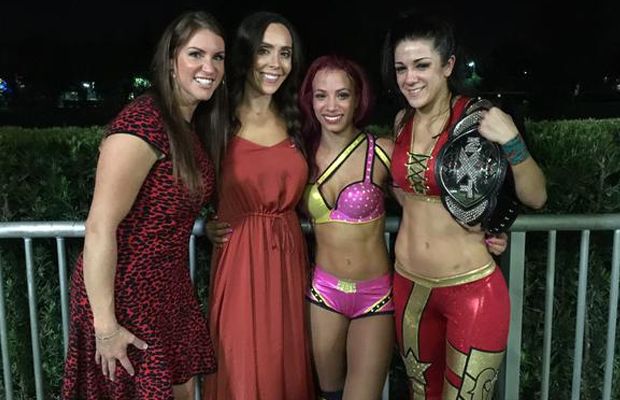 On Saturday, WWE was live from the historic Madison Square Garden in New York City. During the Six Diva Tag Team action that saw Team Bella take on PCB, Charlotte and Becky Lynch left their tag partner Paige stranded in the ring. Lynch took to Twitter to explain her and the Divas Champion’s actions in a clever way:

It’s a Tough Enough reunion! Just weeks after the USA Network reality show ended, the finalists met up at the Legends of the Ring convention in New Jersey for meet and greets. Chelsea, Daria Berenato and Gabi Castrovinci are still looking more determined than ever to be WWE Divas:

Anyone who doesn’t want to end up in the Burn Book knows that October 3rd was National Mean Girls Day. Charlotte and Dolph Ziggler paid tribute to the iconic movie by reenacting the famous “October 3rd” scene on Twitter. So fetch!

How cool are these?! Nikki Bella posted to Instagram a photo of a special package she received from #SelfieCookie. The company takes any photo you want and puts in on some delicious gourmet cookies. Delish!

Fans in Bangor, Maine were treated to a special Divas match this past weekend at a house show. Natalya took on Sasha Banks in a match that had fans on the edge of their seats. Nattie posted this photo of her celebrating her win that a fan snapped. Great to see her back in the mix of the Divas division:

THANK-YOU #WWEBangor. Tonight surprised me in the most unexpected way. I found something I had lost this summer & I didn't know if I could find it ever again. Something between my SELF, my HEART & the RING.

She may be the NXT Women’s Champion, but Bayley is always learning new crafts. Triple H posted a photo of the champ practicing her time keeping skills backstage at an NXT live event:

TNA’s biggest show of the year, Bound For Glory, took place this past weekend and saw Gail Kim defend the Knockouts Championship against Awesome Kong. Kim successfully retained her Championship against her rival. She took to Twitter to thank her fans and supporters of the event:

Thanks for the incredible Charlotte fans last night at #BoundForGlory and the fans' appreciation for our hard work last night. We ?? you!

SERIOUSLY, why have WWE not put Sasha Banks with New Day yet?!?!?! The Bo$$ was seen in a video playing Rock Band with the Tag Team Champions. Although she may excel in the ring, it looks like drumming isn’t her best skill:

This might just be the cutest thing EVER! Trish Stratus has main evented RAW, been in headlining WrestleMania matches and won the Women’s Title seven times, but nothing may be more challenging than sending her baby boy off for his first day of school. Trish posted a photo of her buttoning up her son Max’s coat as he headed out to his first day of class. Good luck, Max! We’ve got tissues if you need them, Trish!

First day of school for Max today! He's so excited … Let's see how he does when I drop him off – or how I do ?#montessori

It’s no secret that former WWE stars love to pay a visit to their old friends at Raw. A face we haven’t seen in quite some time stopped by this week. None other than WWE’s first Harvard graduate, Christopher Nowinski. Natalya shared a pic of her and her friend on Twitter:

Awesome seeing @ChrisNowinski1 backstage at #Raw tonight. He's a great friend to me who has helped me immensely. ? pic.twitter.com/tCHv8c36rF

On Raw, Summer Rae proposed to her boyfriend Rusev in front of the sold out Boston crowd. Rusev accepted but only under the condition that Summer help him become WWE Champion. The determined Diva shared her thoughts on the situation on Twitter:

Stephanie McMahon had a front row seat for history, taking in Bayley and Sasha’s Iron Man match at NXT TakeOver: RESPECT with the crowd at Full Sail. Afterwards, she shared a picture outside of Full Sail’s television studio with the “Iron Women” and trainer Sara Del Rey:

And perhaps the most heart warming image to come from all of social media this week is this one. The father of NXT with his pride and joys after they stole the show and changed the world: