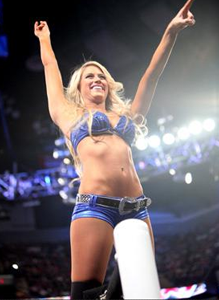 Good evening everyone and welcome to the third or fourth edition of the Southern Belle Smack. It’s been so long between columns that I can’t even remember how few I’ve written but that doesn’t matter. What matters is that, as I’m writing this, I’m currently on pins and needles watching this French Open final between my favorite player, Rafael Nadal, and arguably the greatest player of all-time, Roger Federer. Part of me feels like I should be in Paris right now, sitting in the player’s box, wearing a fine pair of Christian Louboutin heels to go with my designer jeans and slinky little, off-the-shoulder white top. I would be cheering for Rafa, of course, as his faithful WAG, but the other part of me is just so, so incredibly glad that I’m a die-hard sports fan. I truly enjoy all forms of sports, including the often ridiculed sports entertainment.

We know sports entertainment as the WWE’s version of wrestling. A lot of us enjoy it. Smarks look down their noses at it. But all sports, including this tennis match I’m watching, is entertainment. Rafa and Roger, all-time greats, are slugging it out on court. Some of the particular shots have been mesmerizing. The back and forth power struggle has been amazing to watch. Hell, I’m a nervous wreck and am only writing this because I need something to focus on other than just my television. And the whole point of this article is talk about how special it is to watch someone, especially an athlete, come into their own and achieve the pinnacle of sporting success.

A couple of years ago, the entire tennis universe wept with joy when Federer finally completed his career grand slam. For so long the French Open championship had eluded him and after defeating Robin Soderling of Sweden, Fed collapsed to the ground and cried. It wasn’t the first time we had seen him cry. All those losses to Nadal in finals had caused the Switzerland-born and bred Roger to cry many tears. We even watched him have a Kharma-like breakdown after losing to the aforementioned Nadal in Australia. Still, he kept fighting for wins. And kept fighting his critics who said he would never win the French Open.

I’m no Federer fan, but it’s crazy to think that the player who has won more grand slams than any other male player in history would have doubters. But he did, and still does. He wasn’t supposed to beat the soon-to-be world number one, Novak Djokovic, in the semifinals.

If Federer can be considered a long-shot to win the French, and the quote underdog, I suppose it’s fair to say that Kelly Kelly is a huge underdog to win the Diva’s Championship. She’s already failed in her quest to become a champion twice, with her most recent shot coming at last month’s Over The Limit pay-per-view. Her wrestling skills aren’t exactly held in the highest regard. And at times her acting skills leave a lot to be desired.

What I don’t understand is why the majority of the other Divas on the roster have these same issues, yet they don’t get called on them. If we’re being honest, several of the male wrestlers have the same damn problem.

I don’t get why people dislike Kelly Kelly. She’s been working on a weekly basis since she was 18 or 19, and she has improved by leaps and bounds. Like Federer upped his game to finally win on the terre battue of Roland Garros, Kelly has gotten better inside that ring. She has some flashy little moves and she can sell offense better than most. Her acting skills (sans those excruciatingly awful segments with Drew McIntyre on SmackDown a few months ago) are definitely better. She’s successfully shown that she can play two different kinds of babyfaces; a submissive face who just takes abuse and a feisty face who fights anyone whether she gets her butt kicked or not. It’s incredibly unfair for people to call Kelly useless.

She’s paid her dues in wrestling. As far as we know, she’s done absolutely everything the WWE has asked her to do. She comes across as personable and happy in her interviews. And she’s a gorgeous girl who the WWE likes to heavily promote in their marketing campaigns. She’s brought the company outside publicity and she’s made the most of every storyline she’s been brought in. Kelly has made her hate her (when she got to go on television and claim she slept with Randy Orton). Kelly has made me respect her (when she took a kendo stick to the head thanks to The Sandman). And more than anything, Kelly has made me appreciate her and the work she has done. The two SmackDown Reduxes I had the chance to write earlier this year about Kelly and her main event matches are my favorite Reduxes ever. Those two little matches had absolutely everything in them. From emotion, to chemistry between everyone involved, to just great athletic entertainment. When you can bring the crowd into your match and have them eating out of the palm of your hand, you know that you’re in the midst of something beautiful.

Sports entertainment allows us to have these moments and when you’re a sucker for a great storyline and a great Diva, you end up on cloud nine when you get moments like these. Kelly Kelly came into her own this year thanks to her work on SmackDown. She was rewarded by getting drafted to Raw and placed in a storyline with Kharma. We’ll never know how that story was meant to play out and maybe it’s better that way. But what we do know is that the WWE sees Kelly Kelly as a star.

And I believe she is.

It would be a crying shame if Kelly Kelly never got a chance to hold the Diva’s Championship. And to all you people who claim it would be a disgrace because Kelly can’t wrestle, you need to open your eyes. I’ve said it so many times before, World Wrestling ENTERTAINMENT is not about WRESTLING. They market themselves as a brand and don’t claim to be the best at wrestling. Kelly being the champion is no different than Alicia, Maryse, or either Bella twin being champ. She’s just as worthy as they are, perhaps even more. It’s a championship that is shaped like a butterfly (which I have NO problem with to be honest) that has been passed from Diva to Diva since it’s inception into the company. I know the popular opinion is to have Beth Phoenix or Gail Kim step up and challenge the Bella twins now that Kharma is out of the way, but I’ve never been the one who follows what’s popular. I go with what I want and what I want is for Kelly to have one more shot at winning the Diva’s Championship.

I want Kelly Kelly to actually win the championship and go on to feud with the likes of Beth, Natalya, Gail, Melina, and whatever other Diva is “popular” at the moment. I want Kelly to have a lengthy title reign not just to piss people off, but to give her the chance to show the world that she’s more than just a happy blond. Trish Stratus, who won her first title without knowing how to wrestle her way out of a paper bag, got the chance. She evolved into the most beloved Diva of all time and guess what people? She had and still does have a limited move set just like Kelly Kelly.

The point is, wrestling fans are quick to write off Kelly because of what she likes. No one even cares to embrace what she brings to the table. She may not be the best girl on the roster, but she’s far from the worst. She’s a worthy champion just like the ones who came before her, and her as the ultimate underdog champion could be one of the greatest Diva stories ever told.

I think I would weep with tears of sports entertainment joy if Kelly Kelly took the title off Brie Bella. She would have her own Roger Federer type of moment. She would overcome all the odds and everything stacked against and achieve the biggest trophy she could have in her company. It may not be an actual wrestling title that’s highly regarded. It’s not the Women’s Championship which has been held by some of the greatest of all time. It’s not the Wimbledon trophy, the most coveted prize in tennis. It’s not even a gold medal. It is, however, the equivalent of the Coupe des Mousquetaires, the trophy awarded to the men’s champion at the French Open. And if Roger Federer can actually hold that trophy in an era where Rafael Nadal has lost just one match, then Kelly Kelly can certainly hold the Diva’s Championship. Just give her a chance.

Did I really just spend an entire article comparing a shiny, red apple to an exotic, tasty kiwi?