Stephanie McMahon gets “Raw” in “The Chew” kitchen 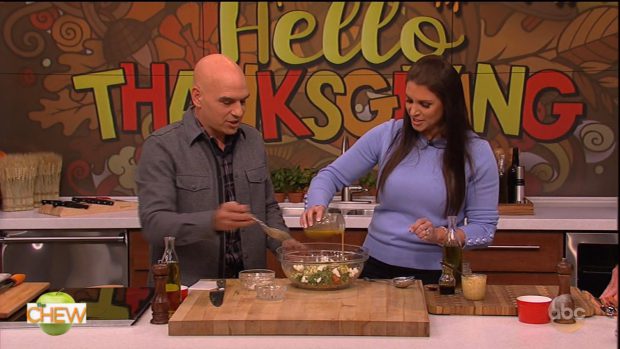 Stephanie McMahon appeared on The Chew this Tuesday to talk about spending the holidays with her family for the show’s “Goodbye Halloween, Hello Thanksgiving” episode.

Introduced as a “tough as nails mom of three”, Stephanie talked with host Michael Symon, who confessed to being a huge WWE fan, and disclosed that the holidays with the McMahons are actually a time to indulge.

“When you’re good and regimented all throughout the year, you have to indulge. You gotta cheat.” she explains.

The eating habits of Stephanie’s three daughters, Aurora Rose, Vaughn Evelyn and Murphy Claire, were also a topic of discussion.

“They’re good eaters. They really eat a lot of green food, ‘cause of course we wanna instill those habits in them. But, they also really like ice cream,” Stephanie added, while also revealing that she makes chocolate chip pancakes for her kids three times a week.

Of course, Michael and Stephanie got down to culinary basics with a simple roasted carrot and farro side dish. Stephanie helped Michael roast the carrots, even saying Emeril Lagasse’s signature “bam!” during the segment, before talking about being a heel in the WWE Universe, dressing up as Black Widow alongside hubby Triple H as Deadpool for Halloween and the forthcoming Survivor’s Series Pay-Per-View event on November 20.

In the end, Michael asked about the current evolution of WWE’s Women’s Division, which Stephanie credits to the women and fans.

Watch Stephanie’s appearance on The Chew below:

What do you think of Stephanie’s turn in The Chew kitchen? What other show would you like to see Stephanie make an appearance on next? Sound off in the comments section below!