Summer Rae discusses her inspirations, fitness and more in interview 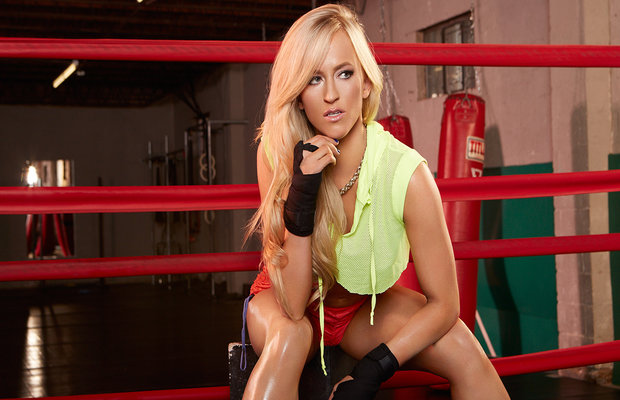 While the jury is still out on who really started the “divas/women’s wrestling revolution,” one of the first shots were fired in NXT by Summer Rae and her work with the BFFs in laying the foundation for a stronger division. Naluda recently sat down with Summer, real name Danielle Moinet, where she discussed her inspirations, fitness routines, women’s wrestling, and more.

On her biggest influence: My parents have been my biggest influencers. They both immigrated to America and taught me that I can do anything I dream of with hard work & determination. They have also been married for 36 years which is something I respect and look up too.

On how she differs from her character in real life: Summer Rae and Danielle Moinet are extremely different. Summer is a self absorbed, manipulative, calculated, witch. I must say it is extremely fun to play because it couldn’t be further away from who I am.

On getting into fitness and her workout motivations: I’ve always lead a healthy lifestyle. I got into fitness in High School while playing sports, but I really started learning about weight training around 22 when I graduated from college and was stuck at a desk job. I needed that physical activity & release after a 10 hour workday! My body is my brand! No one is going to hold my hand and walk me into the gym after a four hour flight with an eleven hour work day ahead of me. So being the best version of myself is very important! I lift weights 3-4 days a week, rotating on a upper and lower body schedule by trying to do cardio twice a week. Switching up my cardio is important so I don’t get bored. I also love SoulCycle!

On highlights in her career: There are so many favorite moments for me. One thing that stands out to me is being cast in my first movie role, The Marine 4: Moving Target. I was the first woman in WWE to ever be in a WWE Studios movie and was honored to be trusted with such an opportunity. I learned so much on set and really fell in love with acting.

On being a WWE Superstar: The greatest thing about being a WWE Superstar is being able to reach so many people. We have so many young girls that look up to us and that drives me to lead by example. Being able to volunteer with our charitable causes within WWE and for causes I personally believe in is great with such a large fan base. It allows us to spread the word to so many.

On how she became interested in wrestling: Growing up I always watched WWF with my dad on Saturdays. It was our thing! Now it’s so cool to be able to bring him backstage with me and to Wrestlemania week. It’s a pretty cool full circle moment for us.

On the most rewarding and most difficult things about being in the business: The most rewarding part of my job is seeing the smiles we put on people’s faces. No matter what kind of day or week or month they were having, when they step into that arena they get to forget about all of that for a couple hours. That is why I do this!
Spending so much time on the road is the biggest challenge for me with WWE. I’ve missed weddings and births. I’ve spent a lot of time away from my friends and family for so many years. That part is really hard.

On beauty inspirations: I’m obsessed with beauty trends and follow a lot of brands on social media. I have a very multi-dimensional take on beauty and think it is such a wonderful way to self-express. It’s important to know when to cake it on and when do dial it back! Gigi Hadid and Kendall Jenner both do that so well when it comes to beauty and style. They both have killer full glam looks but also have times where they show effortless simplicity that I love!