Sunday Supplement: Will The Knockout Tag Titles Sink or Swim?

In the Saturday Sunday Supplement, the Diva Dirt team will aim to discuss a news story, a televised event or other relevant and current topics. The objective, like the average weekend newspaper, is to offer more indepth and lengthy discussion. 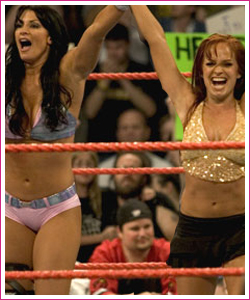 TNA is setting out to live up to their tagline, ‘Cross the Line’, but not in the ways you would think. In an attempt to push even more boundaries and utilize their ever-growing roster of Knockouts, they’ve decided to implement a tag team division. In the coming weeks, a tournament will take place to determine the first ever Knockouts Tag Team Champions. The question is will the division work?

Serious women’s tag team wrestling has been a niche for quite some time now. During the mid-80s, it was rare to see a women’s match let alone a tag team match. However, that didn’t stop the World Wrestling Federation from making a tag team division for the ladies. In 1983, Velvet McIntyre and Princess Victoria‘s NWA Women’s Tag Team Championship belts were converted into the WWF Women’s Tag Team Championship when the two defected from the National Wrestling Alliance and joined WWF. In it’s six years of existence, the belts passed through the hands of several teams before they were captured by the Jumping Bomb Angels (Noriyo Tateno and Itsuki Yamazaki), who would be be the last women to hold the titles before they became defunct in 1989.

Women’s tag team wrestling became all but extinct until the mid-2000s, when all-female promotions such as Women Superstars Uncensored and most notably SHIMMER brought it back into the limelight.

In October 2008, both promotions introduced their own Tag Team Championships to further utilize their rosters. SHIMMER introduced their’s in a critically acclaimed six team gauntlet match, while WSU held a tournament. Both promotions met general success; WSU’s tag titles have been sought after by stars such as Taylor Wilde and current WWE signee, April Lee while SHIMMER’s tag team division’s most recognizable champion is TNA Knockout, Madison Rayne.

TNA hopes to replicate some of success those promotions have had, when they debut the Knockout tag titles in the months to come. To be honest, I’m sure TNA can surpass the achievements of others in this field, if they can take the necessary steps. So what can TNA do? 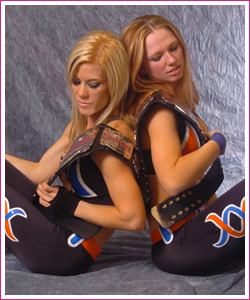 First off, they need to establish their division. Instead of just throwing random girls together, just for the sake of doing so, pair them according to their chemistry and compatibility character-wise. High flyers Taylor Wilde and Sarita are the best example of this. From the moment they stepped in the ring, they showed a natural affinity towards each other, while teams such as Tara and Christy Hemme seem mismatched and awkward.

Secondly, bring in new competitors. With the vast amount of Knockouts on the roster, it’s easy to form new teams from the current roster, however there are plenty of ready-made tag teams on the independent scene, particularly SHIMMER, that have years of experience as partners.

Teams like the Pink Ladies (Madison Eagles and Jessie McKay) and the Candian NINJAs (Portia Perez and Nicole Matthews) from SHIMMER as well as the Soul Sisters (Jana and Latasha) from WSU could bring a whole new dynamic, not only to the Knockouts division but to TNA as a whole. Other prime candidates include Team Blondage (Krissy Vaine and Amber O’Neal) and the veteran team of The Experience (Malia Hosaka and Lexie Fyfe). TNA could even reunite the newly liberated Madison Rayne with her old partner and co-champion, Nevaeh or team Daffney up with her old SHIMMER charge, MsChif.

Lastly, TNA needs to give the Knockouts tag titles the same attention they give to the male tag division. While in WWE, tag team matches are often an afterthought much like the Divas, TNA has always had a soft spot for them. It’s not unusual for TNA to create new and innovative ways for their teams to compete and that creative flare could draw even more attention to a division that is already a fairly unique concept. Why not have a Knockouts Monster’s Ball tag team match or a Steel Asylum Match? Much like the recent 10,000 Tacks Match between Taylor Wilde and Daffney, these match ideas could a fire under the newly created division.

In closing, the fate TNA’s Knockouts tag team division lies in the hands of management and the creative team. If given the care and nurturing that the Knockouts division recieved during its infancy, it can flourish into something truly revolutionary in today’s world of professional wrestling. Given the right tools, this division could be the factor that brings women’s wrestling back to it’s former glory. But given how the Knockouts division has been treated as of late, how likely is that to happen?